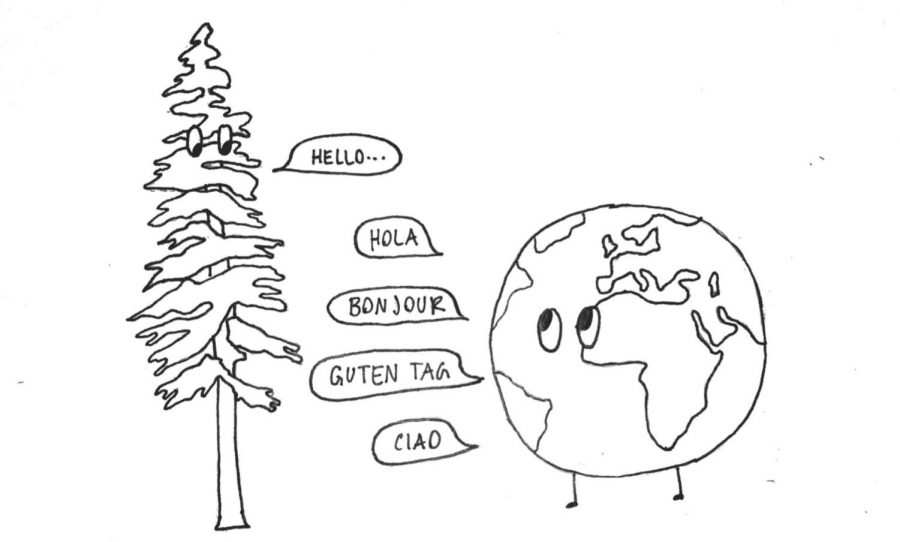 After taking four years of Spanish, that is one of the few sentences I am confident in speaking. In the past, being monolingual has not bothered me, but after traveling internationally this year, I realized how common being bilingual is in other countries. The people I interacted with spoke their native language along with English and, in some instances, one or two more. I was surrounded by a symphony of dialects, listening to musical sounds of words I’d never heard before, all foreign to me. I felt simultaneously in awe of their abilities and suddenly conscious of my lack thereof.

Back home, I found myself wondering why the majority of students at my school speak their native English primarily, with the occasional rudimentary Spanish. Day after day, we repeat the same phrases, sounding uniform and mechanical in contrast to the rainbow of sounds that exist abroad.

According to an October survey by the Bark, 43 percent of students self reported that they comfortably speak two languages. However, 66 percent of children globally are raised knowing more than one language, putting Redwood far below the international average, according to the Associated Press. The issue is even more pronounced at the national level: as of 2018, only 20 percent of Americans were bilingual, according to the U.S. Census Bureau.

In order to increase proficiency in foreign languages, American youth should be introduced to a second language from a younger age. Following that, Redwood should promote foreign language classes by making it a requirement for students.

A large number of students at Redwood were not enrolled in a Spanish class prior to seventh and eighth grade. At Bel Aire Elementary School, however, students begin Spanish classes in third grade, with more advanced classes starting in sixth grade. Other elementary schools should follow this model, as data from Newsweek shows that it becomes harder to retain a second language after turning 10 years old. This practice allows students from Bel Aire and its feeder school, Del Mar, to enter Redwood ahead of their peers, giving them a greater opportunity to be fluent or proficient.

When students arrive at high school, they are not required to take any foreign language classes in order to graduate. However, two years of a language is required for California public colleges. Due to this obligation, many students take the bare minimum to qualify.

This shows that in the current system, the majority of students go 12 or 13 years without any second language and take one for a few years in middle and high school. A foreign language class turns to a state of deprioritization, with many upperclassmen choosing not to continue with the class as soon as the requirements are filled. The responsibility falls on the administration to enforce higher language class enrollment, something they do not do at the moment.

Marin students are required to sit through more years of physical education (all through elementary/middle school and two years at Redwood) than a foreign language. How does this make sense when in the workplace and other aspects of adult life, speaking a second language is more likely to be helpful than knowing the rules of dodgeball? In fact, The Economist predicts that speaking another language could earn a person an additional $128,000 over a 40 year period due to the high demand for workers who speak multiple languages.

Beyond giving students an advantage in future workplaces, being bilingual can significantly improve aspects of mental strength. According to an article in the U.S. National Library of Medicine by Viorica Marian, Ph.D in experimental psychology, being bilingual leads to better cognitive skills.

“Because both of a bilingual person’s language systems are always active and competing, that person uses these control mechanisms every time she or he speaks or listens. This constant practice strengthens the control mechanisms and changes the associated brain regions,” Marian wrote.

Despite cognitive and practical benefits, the majority of upperclassmen at Redwood are not taking a foreign language. Students may argue that they dropped a foreign language class in order to lighten their course load or allow them to focus on subjects they want to pursue in the future. However, most language classes (that are not Advanced Placement) offered at Redwood only comprise of about one homework assignment per week and dropping them will not significantly reduce the amount of time a student spends on work. As a current student of the honors 7-8 Spanish class, I have yet to be assigned over an hour of homework total for the two months I have been in school. With just this basic work, I have been able to continue learning Spanish to increase my proficiency.

This is possible not only for myself, but for most students at Redwood. Prioritizing Spanish and other foreign languages from elementary school to the end of high school will not only put an important skill first, but our mental competency and future life opportunities as well.