Varsity football perseveres in the game, but loses to Marin Catholic 14-0 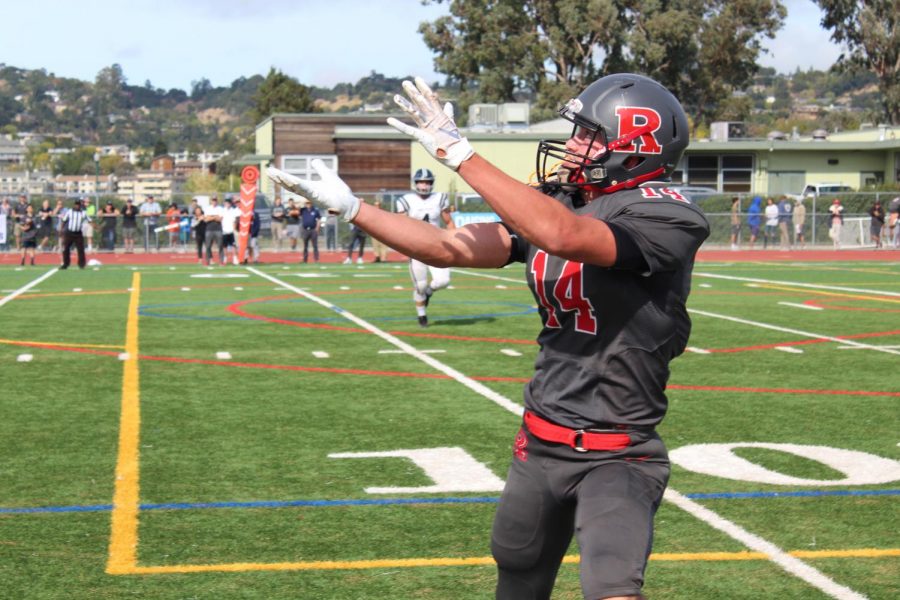 Marin Catholic’s football team has always been difficult to defeat, so much that they moved out of the Marin County Athletic League (MCAL) in order to face stiffer competition. Although they anticipated a tough challenge, the Redwood boys held their ground against Marin Catholic (MC) in a home game on Saturday, Oct. 19. The Giants were able to hold the Wildcats scoreless in the second half, but lost the game 14-0 due to several missed opportunities to score while inside the 10 yard line. Redwood also lost approximately 50 yards due to problems related to snapping the ball, causing the Giants’ winning streak to end.

MC wasted no time in the first quarter, scoring during their first possession which brought the score to 7-0. Despite the wildcats’ early lead, junior Zach Ginsburg capitalized on offense, catching a 48-yard pass by senior quarterback Matt Smalbach.

“Even if we are down, it’s essential that we never give up. The game is not over until it’s over. If we end up not winning, it’s better to know that we did everything we could on the field,” Calzaretta said.

In the beginning of the third quarter, senior Henry Minturn sacked the MC quarterback, which forced them to the fourth down. MC countered with a touchdown in the third quarter, but the play was called back due to an offensive holding penalty. Redwood continued to persevere throughout the second half of the game. In the fourth quarter of the game, Ginsburg made an outstanding catch for a first down at the 30-yard line with eight minutes left to go, reviving the Giants’ energy as they attempted to mount a comeback. Redwood strength and conditioning coach JJ Davis, who once coached at MC, was at the game mentoring the team and getting them into the right mindset. Although Redwood didn’t take the win, Davis was impressed with the players’ stamina.

“Even though Marin Catholic beat us this time, I am still insanely proud of the guys and the training they put in over these last few weeks to play a strong game,” Davis said.

According to Minturn, the team will continue to work their hardest in preparation for their next game.

“We played harder than we have in the past for sure, and although we made a few mistakes in the game, we’re not going to change anything in preparation for the homecoming game. We are just going to continue playing our game,” Minturn said.

Although this loss ended Redwood’s winning streak, the Giants have another opportunity to redeem themselves at the homecoming game on Saturday, Oct. 26 at 2 p.m. against San Rafael.