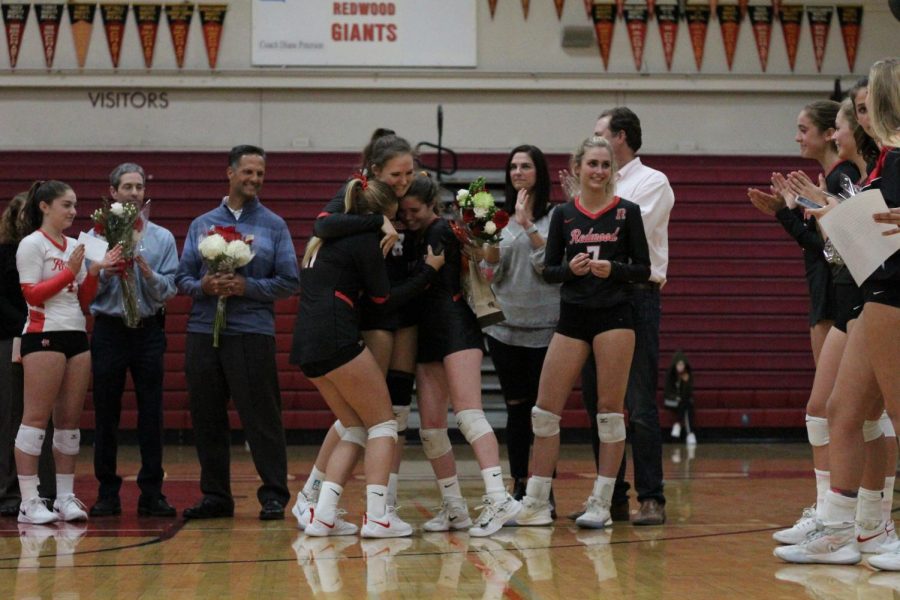 With bundles of flowers and several emotional speeches, the girls’ volleyball team commemorated their seniors’ accomplishments during their annual Senior Night on Oct. 16. Parents, friends and teachers alike gathered to watch the seniors play in their final regular season home game against the Drake Pirates. Determined to leave the Phil Roark Gymnasium in victory, the team defeated the Pirates 3-0.

Despite the high spirits from senior night, the Giants started off the night with a hiccup, losing the first point of the game. However, the Giants easily bounced back with six consecutive points.

Senior libero Noe Corren noticed they had overwhelming vigor from the beginning of the game, allowing them to play as a united front against the Pirates.

“You could feel the intensity all around the gym. Everyone really stepped up tonight, especially the seniors. We really wanted to remember our last home game,” Corren said.

Maintaining their strong momentum, the Giants worked strategically to keep a comfortable point gap between themselves and Drake. After the Pirates called a timeout moments before the end of the first set, the Giants secured the first set of the night, 25-16.

Determined to put up points at the start of the second set, the Pirates snatched the lead and scored five points in a row.

Redwood quickly called a timeout, and coach Ursula Grunert made sure to emphasize the importance of consistent energy and attention to control the fluctuating scoreboard.

“Staying focused throughout the game is definitely our biggest struggle. Just making sure everyone’s engaged during the match keeps us on our toes. We were feeling a little frantic that second game,” Grunert said.

Instilling Grunert’s words into their offense, the girls came out of the timeout and won the second set 25-13.

The third set started rocky again, with several back and forth points between the two teams since Redwood failed to return several serves.

Noticing the team’s dwindling energy, freshman Katelyn Mcknew immediately began leading the team in a series of chants to boost their confidence.

“Our emotions were rollercoastering up and down. We were kind of low energy but we stayed focused by being loud on the bench and cheering between every point and depending on each other,” Mcknew said.

The Giants subsequently finalized their win 25-19 against the Pirates in the third set.

Pleased with the results, Grunert is now focused on the Marin County Athletic League (MCAL) playoffs next week. The Giant’s performance against the Pirates assured her that they are prepared to face their rival Marin Catholic (MC) and rewrite the history of last year’s championship game.

“I’m excited because we took a set off Marin Catholic last time we played them. I feel like we’re kind of on that roll. If we play them again in the finals we’ll have a better shot of taking them to five and maybe beating them. I know the girls are really fired up and want to beat them so badly,” Grunert said.

The Giants are set to face Branson on Oct. 18 at 6 p.m. at Branson for their final regular season game.