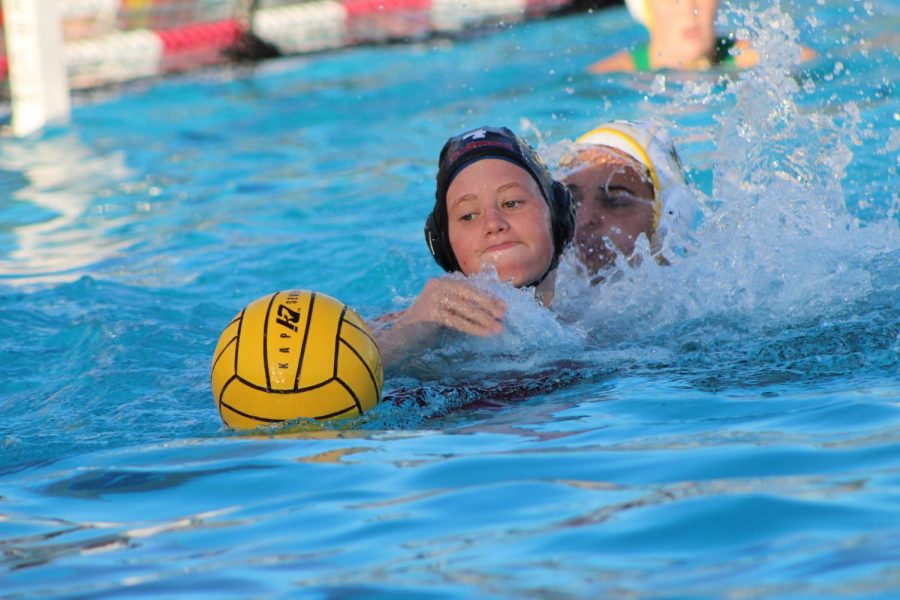 The buzzer blasts onto the pool deck, adding fuel to the fire of an already-energetic Redwood crowd. Dozens of parents and students clap and whistle as the girls’ varsity water polo team swims to the edge of the pool, victorious, after a commanding win.

The scoreboard reads 17-2 by the end of the game. After just two goals in a slow first quarter, the Lady Giants hit their stride later in the game, proceeding to score another 15 goals and nearly shutting out the San Marin Mustangs on Oct. 14.

Many of these goals were scored by fast breaks down the pool, which Redwood was able to take advantage of throughout the game due to a strong roster of 20 girls. Sophomore Gwen Kallmeyer, who scored three goals, noticed the variety of players in the pool as a result of substitutions.

“We were really stoked that a lot of people got to score, because we had a lot more opportunities on offense,” Kallmeyer said.

The blowout game also allowed the team to experiment with complex offensive plays, as if they were in practice.

“When the team we’re playing is not as great of a match to our team, we tend to run our offenses more and we’re more accurate. It’s our chance to practice executing them and start to perfect them,” Kallmeyer said.

Another standout player, junior Livy Selden, scored four goals against the Mustangs, the most of any girl on the team. According to Selden, the team had to adapt to San Marin’s defensive tactics.

“They left our [main offender] wide open, but then when we passed it [to her], they would foul and they would [swarm] the girl with the ball. So we couldn’t actually do anything, and we were forced to drive [to score],” Selden said.

Kallmeyer added that, despite the 15-point win, there were still cracks in the team’s performance.

“Sometimes, when we play a team that’s better or worse than us, we tend to play up or down to them,” Kallmeyer said. “Today, we played down to [San Marin], especially in the first quarter. By half[time], we figured it out and started scoring a lot more and getting the ball to the net.”

This year, goalies Stella Cico and Piper Tonne, a freshman and senior respectively, have been crucial to the team’s success, filling the spot left after the graduation of Katie Treene.

“Our goalies and our defense were a big part of the win today,” Kallmeyer said. “Our defense allowed only two goals, because we were only giving the other team bad shots. The goalies and the defense worked really well together.”

In addition to the Giants’ defensive team, new freshmen also contributed to the win, according to Kallmeyer. Cico and the other three freshmen on varsity have proven to be strong in the pool.

The Giants managed to close out the game strong, scoring six goals in the fourth quarter. According to senior Cassidy Fragakis, the team will continue working on strength training in practice moving forward.

“We’ve been working on conditioning and shooting in practice,” Fragakis said. “That has helped us a lot so far this year. It brings us closer as a team and keeps us pushing still at the end of every game.”

Elevated fitness will reinforce their resiliency in the fourth quarter, which will prove useful against competitive teams such as Drake, according to Fragakis. She added that the team-building benefits of this conditioning in practice were already visible in the game against San Marin.

“Our teamwork carried us today,” Fragakis said. “We worked hard to see different opportunities that came up in the pool, and that got us the win.”

The Giants play their next game, at Marin Catholic on Thursday, Oct. 24 at 5 p.m.