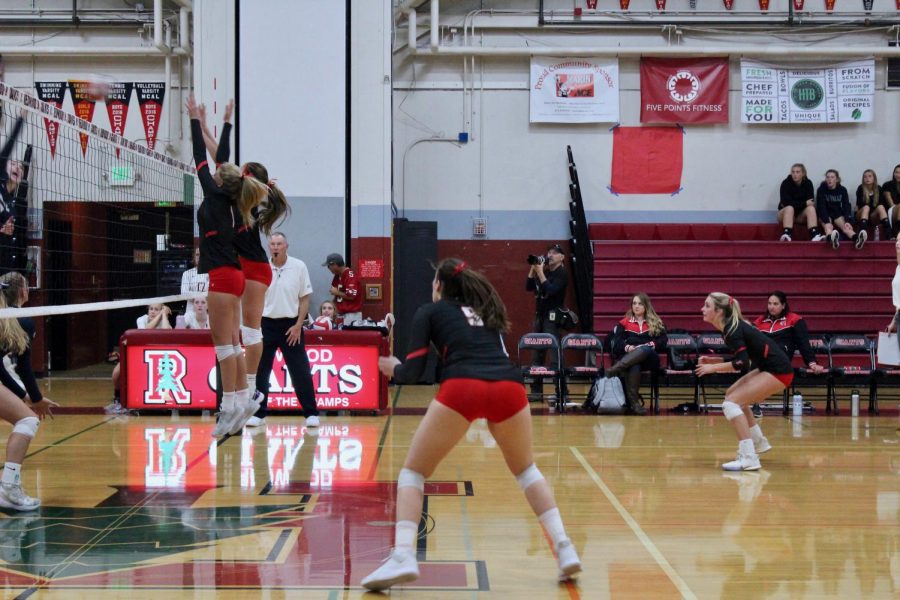 Blocking a strike from an MC hitter, Kemp and Mathews performed well defensively for Redwood.

Marin Catholic (MC) is a notorious competitor in MCAL girls volleyball, especially with this years’ strong roster including Harvard and Loyola Marymount University commits. Prior to the game the team felt a lot of pressure and the Giants anticipated a hard fought match according to senior Jordan Perry. However, in the first quarter, the team fed off the adrenaline pumping throughout the Redwood gym, pulling away with a 11-6 lead with consecutive kills from junior and University of Pennsylvania commit Ella Green. According to Perry, the student turnout fueled the intensity.  The Giants won the first set, 25-19, as the electric student section rallied and chanted. Despite the strong performance in the first set, the Giants fell to the Wildcats, who won the three following sets.

“Sometimes our team goes on a roller coaster with our energy levels. Even when we were losing or falling behind, we would get a kill and hear everyone screaming, it was such a confidence booster,” Perry said.

According to senior captain Noe Corren, the team executed their three goals in the first set: covering, communicating and consistent energy.

“Offensively, we tried to move around the ball as much as possible. We threw in a lot of tips and roll shots that MC wasn’t ready for,” Corren said.

Coming from their post-quarter huddle, MC brought the heat largely carried by 6’ 6’’ senior Kari Geissberger, who contributed multiple kill. According to MC senior captain Olivia Cooper, the team needed to settle in before they were able to play to their full potential.

“We have never been in that loud of an environment. We’ve played in those big games before, but this was the largest one all year. We came out a little shocked,” Cooper said. “All that was said after the first set was that we needed to settle in and get the nerves out. Redwood played amazing, so our goal was to mix it up. We were playing comfortably and they capitalized on that.”

Redwood’s success in the second quarter came from senior Elsa Kemp and freshman Kaley Mathews, who were a collective barrier for MC’s hitters.

“[Kemp and Mathews] shut down MC when we needed them to. [Mathews] really contributed to the court, especially as a freshman in a really high pressure situation,” Perry said.

Redwood’s morale dampened as the score proceeded from 22-22, to 26-24, an initiation to the loss of momentum for the Giants. According to Corren, their initial strategy lost its effect as MC adapted to their play.

“[Redwood’s strategy] worked well for the first set but they started reading our movement more. MC adjusted their defense which is why it didn’t work as well throughout the rest of the game,” Corren said.

Redwood will face off against the Tamalpais Hawks on Monday Oct. 7 at home at 6 p.m.