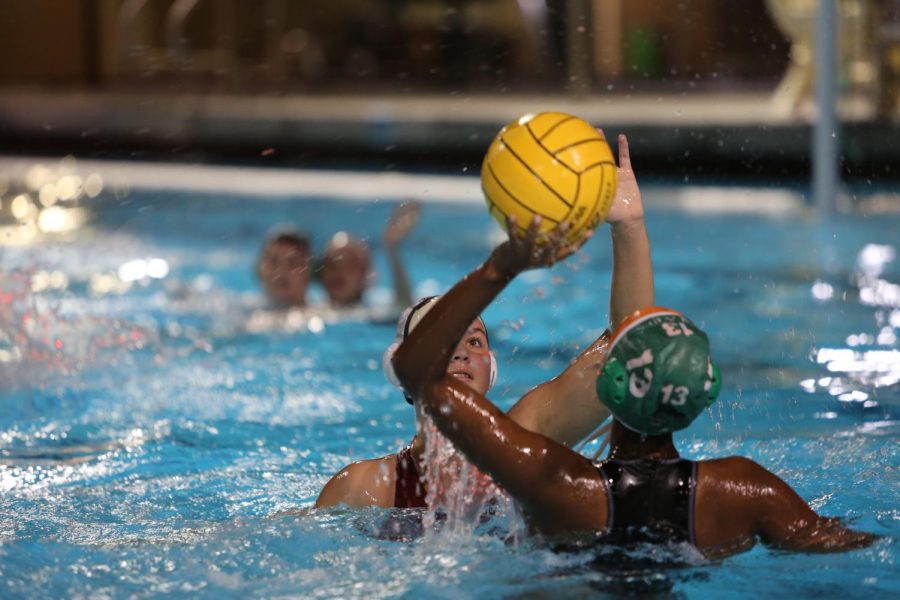 Redwood blocks Drake offense in an attempt to score.

The steam rose off the water of the pool at Drake High School late Tuesday evening before the Redwood girls’ junior varsity (JV) water polo team took the plunge. The team fought hard against their conference rival, however they fell to the Pirates with a score of 7-2.

Tension ran high among fans and players alike as the Giants huddled up in anticipation of their first league game. Freshman first-year player Gemma Favaloro knew the task of beating the Pirates would be a formidable one.

“[It is] the scariest just because they are so good, but I think we are really confident about it and are going to play our best,” Favaloro said before the game.

In the second quarter, junior Sasha Grams hurled the ball directly into the corner of the goal, where it was blocked with tremendous effort from the Drake goalie. After nearly scoring their second point, Redwood players seemed to display renewed energy. Coach Frank Cardinale commented on the Giants’ defensive strength.

“They are aggressive without being violent, so they play excellent defense which is key,” Cardinale said.

For the remainder of the game, Redwood played with more focus, but was unable to deter the Pirates’ strong offensive pressure.

Drake scored their fifth goal in the second quarter, bringing the score to 5-1. Nonetheless, the Giants’ positive attitude and mutual support persisted and should serve them well going into the season, according to Cardinale.

“The team’s biggest strength is the fact that they all actually get along. It’s a good, cohesive group of people,” Cardinale said.

“There is a difference in the pool from being helpful to just yelling at people. Sometimes other teams get aggressive towards their own teammates which creates a bad environment for the game,” Allen said. “We all try to be really supportive of each other which gets people motivated to do better.”

The game concluded with a fourth-quarter goal by Allen. The Redwood crowd and teammates erupted with cheers for Allen’s hard-fought point. Allen believes that if the team plays to their full potential, they should win most of their games this season.

The Giants will be playing James Logan High School in an away tournament on Oct. 4.