The Impossible quest to find the best vegetarian burger 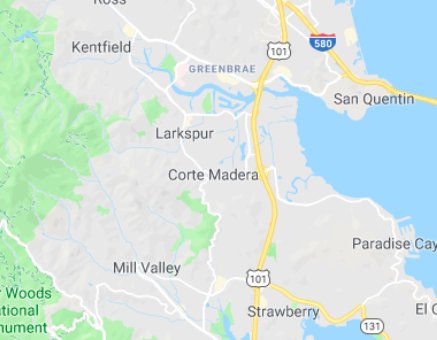 Being a vegetarian for nearly three years, I often face the dilemma of not knowing what to eat when I go out with my friends. I’ll step into a restaurant excited to order a juicy burger with a large side of fries, then look at the menu and realize I can’t eat 99 percent of the options. Or so it seems. Lucky for the other herbivores out there, I have conducted a deep investigation into the best (and worst) vegetarian burgers in Marin so together we can eradicate this problem once and for all.

I went to four of Marin’s most popular burger joints and ate the recommended vegetarian option. I either ordered the suggested vegetarian option on the menu or asked my server what they thought was my best bet. I then judged the burger on presentation, taste and price to bring you the most accurate five-star rating possible. Enjoy. 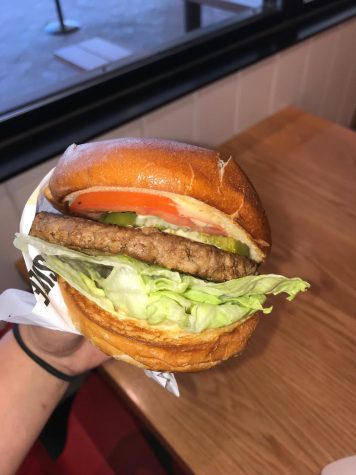 There are no recommended vegetarian options on the Gott’s menu, however, they offer both a vegetarian and Impossible patty. Obviously, this decision was too monumental to make myself so I asked the server what she recommended. I ended up ordering a basic hamburger with lettuce, tomato, pickle and special sauce and substituted in an Impossible patty. For those of you who have not yet ventured out of the world of medium-rare cheeseburgers, take a look around: Impossible burgers are plant based and infused with the molecule, heme, to replicate a beefy flavor. According to Impossible, heme is an “essential molecule found in every living plant and animal… Here at Impossible Foods, our plant-based heme is made via fermentation of genetically engineered yeast.” Though this may sound gross, the final product is pretty good. This was not my first time eating an Impossible burger, however, the resemblance to actual meat still surprised me. At first, the unfamiliar flavor of meat made me feel a little nauseous, but by the end of the burger, I was pleasantly reminded of the meat flavor I choose to live without. The savory combination of pickles and Gott’s secret special sauce complimented the meat flavor well, but it also made the eating process a little messy. The overall cost was $11.99, which included a four dollar addition for substituting in an Impossible patty. Although this is a little more than I would have preferred to spend on a relatively basic burger, the satisfaction of eating a tender Impossible burger sandwiched between perfectly fluffy buns and slathered in yummy sauce made it worth the price. 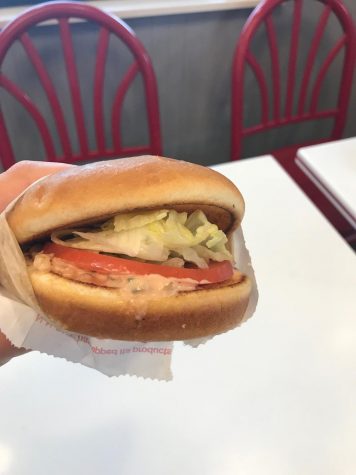 Staring at the In-n-Out menu, I saw absolutely no mention of anything that may possibly resemble a vegetarian alternative, which gave me an uneasy feeling early on. However, the server quickly pointed me to an un-posted menu item referred to as “The Veggie.” The Veggie consisted of lettuce, tomato and secret sauce between two hamburger buns, making it more of a sandwich than a burger. My first observation upon biting into the creation was that the lettuce was extremely crunchy. Yet, this enjoyment was soon overcome by globs of secret sauce which, although good, overpowered the taste of lettuce and tomato and caused the sandwich to become soggy after only a few minutes. Additionally, with only bread and condiments, the burger/sandwich was far from filling. If you’re anything like me and always seem to be hungry, this product is not for you. I only ended up taking a few bites but with a price of $1.25, I didn’t feel too guilty about wasting my food and money. 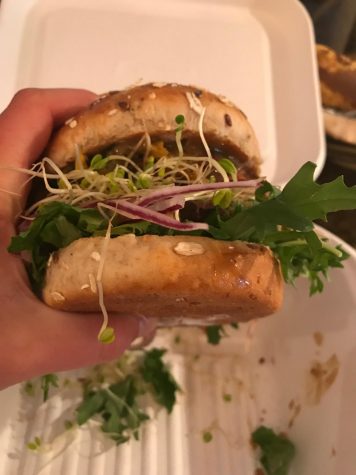 My ordering experience at The Counter was relatively easy due to how the menu features a pre-created vegetarian burger, which was strategically placed front and center. The Sprouted Veggie burger consists of a veggie patty topped with mixed greens, red onion, alfalfa sprouts, dijon balsamic dressing and red bell peppers (which I left off due to a matter of personal preference), all between a multigrain bun. I was not optimistic going into the first bite because it all just seemed too healthy: sprouts, multigrain, come on! However, the dijon balsamic covered up the earthy flavors to make it taste sweet and crunchy. I was thoroughly enjoying myself until I got a bite of something strangely chewy and realized something was off. Looking down at my plate I noticed a scattering of dried cranberries. Not only am I strong opponent of fruit in savory dishes, but the sweet, sticky cranberries distracted from the burger-like flavors that should have dominated the patty. The price of the burger was $11.75, which, similarly to Gott’s, is more pricey than I would have preferred, but this time, was not worth the expense. However, The Counter also offers an Impossible burger which although costs a whopping $17.25 without premium toppings, may be more tasty. 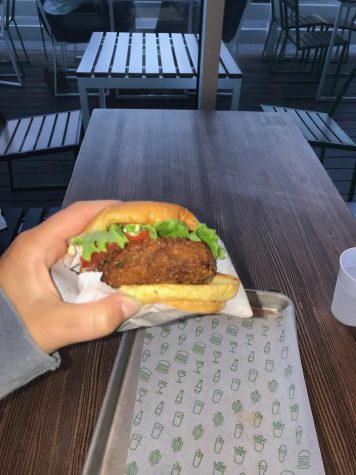 The best word I can use to describe Shake Shack’s only vegetarian option on the menu would be… creative failure. To put a twist on the classic Portobello burger, the mushroom was stuffed with muenster and cheddar cheese and then battered and fried so the edges were crispy. Additionally, it was topped with lettuce, tomato and Shack sauce. The mushroom was satisfying to bite into because there was an immediate crunch as my teeth bit through the fried edge. However, the Portabello itself was undercooked and felt rubbery in my mouth. The cheese combination created a warm, mac-n-cheese-like flavor, and resulted in a mesmerizing cheese pull. Unfortunately, there was so much cheese that I found myself pulling it out of the burger and placing it on my tray. Although I appreciated the creativity, the combination of fried mushroom, gooey cheese and mayonnaise-based sauce was a huge flavor overload. Luckily, although it included flashy ingredients such as Portobello and Muenster, the burger (if you can call it that) was reasonably priced at $7.99.