Satire: ‘Mom, can I go to Outsidelands? I want a photo with the WINDMILLS’ 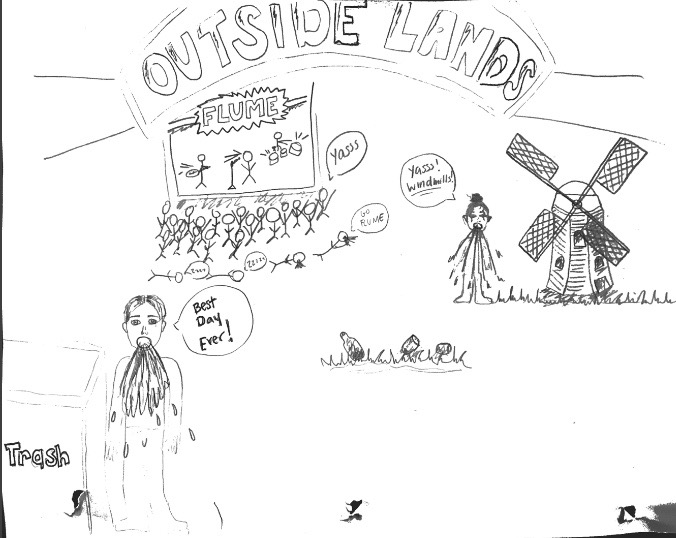 On Aug. 9 2019, Golden Gate Park in San Francisco opened its gates to a crowd of angsty teenagers eager to consume whatever mind-altering substance that would serve their purpose that day.

The annual Outsidelands (OSL) music festival is an event that anyone between the ages of 14 and 21 cannot miss. If a 400 dollar ticket is not purchased months in advance, those not going might as well pack their bags and move to a different state where Rolling Loud tickets are still for sale. Not only would moving away from the festival allow them to wallow in fear of missing out (FOMO) due to the endless amount of Instagram photos, but it would also dismiss them of the humiliation of not going. FOMO has actually been scientifically proven to cause mental health issues.

According to a recent study by Pew Research, 97 percent of mental health problems among teenagers stem from being absent at OSL.

Due to this shocking study, the Wellness Center has decided to devote all of its resources to raising awareness towards FOMO prevention among the student body. The Wellness Center will be giving out free #nofomo stickers and hats during lunch next week on the south lawn.

While it is crucial to attend the festival as it can provide blissful therapy for the mind, it is even more imperative to prepare for it in the correct way. Approximately 99.9 percent of high schoolers who go to the festival will be, as people say, either “shitfaced” or “hammered,” therefore going sober to this event is not an option. Here are some tips and tricks to ensure that you will not remember a single thing from day one, day two and definitely not day three.

Go to Golden Gate park two months before the festival and bury a couple handles of peach flavored Svedka Vodka. That way when the festival comes up, you’ll only need to bring a shovel with you and you’ll be good to go. X marks the spot.
Learn to reseal an Arrowhead plastic water bottle so security won’t suspect you replaced the water with liquor.
Make sure to throw yourself into every mosh pit with shoelaces tied tightly together (if you have your ears pierced, it’s always fun to wear huge hoop earrings that could potentially get magnetized to someones juul). This makes the experience more of a challenge and overall a whole lot more fun.
Make sure to chug at least four Whiteclaws beforehand to ensure no awkward encounters with any of your peers at the festival.
If the “GoGo Squeeze” trick doesn’t get past security, pull the classic, “Look, a tiger!” trick and run.

People who attend the festival do deserve some credit for the creative approaches in concealing their substances while walking through security. However, many people including myself believe that the private security and San Francisco Police Department (SFPD) should ease up on those young adults. Allowing rampant drug use and teenagers to roam around a grass field while intoxicated is the perfect way to escape the mental burden of their helicopter parents and hours of unnecessary college counseling and tutoring.

According to the SFPD, many of the officers’ favorite way to waste time at the festival is to place bets on how many people they will see puking in trash cans. The winner gets a gift certificate to either Starbucks or Soulcycle.

Officer Jordan O’Hennessy enjoys this friendly competition each year and even compares it to the hype behind Fantasy Football. Sometimes he thinks it has the potential to teach the young a lesson.

“I hope those obnoxious and self centered teens will learn their lesson by getting sent to the hospital. Sometimes I’ll see a youngster sneaking a sip of vodka and won’t do anything,” O’Hennessy said.

According to O’Hennessy and many other officers, the WINDMILL section of the festival grounds is the prime area to spot hundreds of intoxicated teenagers running around like wild animals. There has only been one arrest at the WINDMILLS ever, and that was due to a crackhead climbing up the decorative piece and falling onto an innocent child.

As the OSL music festival becomes more popular, it’s important to remember that security will soon no longer be an issue. Soon teenagers will have the ability to experiment with whatever kinds of drugs they wish to without authorities getting in the way. This beneficial change will finally let OSL be a hub for fu**ed up teenagers to dance to music they have never heard before. Haley Hendrix who?