Why smartphones need an age restriction in an increasingly digital world 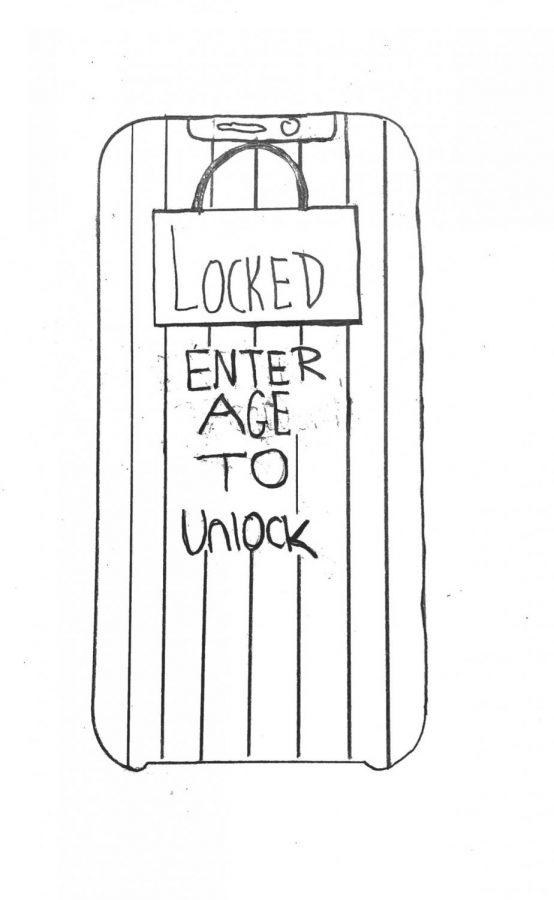 “Like any parenting issue, everyone has an opinion,” says Washington Children’s Hospital pediatrician Wendy Sue Swanson in an interview with the New York Times. “I ask parents if their child pretends to talk on a cellphone. Almost all of them do,” Dr. Swanson said.Young children often play with smartphones, which could be interpreted as funny, cute and even entertaining. Likewise, children playing cops and robbers can create a humorous atmosphere while negating an unpleasant connotation.

Although both of these activities are fairly entertaining to watch, playing with a phone is not the same as playing cops and robbers in your backyard. While smartphones may seem harmless, they negatively affect children’s long-term mental health. Smartphones are creating a severe dependency and addiction, which some professionals, such as Dr. Swanson, say is similar to giving children hard drugs and alcohol.

At some point, we will have to decide a proper time for children to possess their own smartphones. That time is now.

Children constantly beg their parents to buy them their own smartphone—I know I have. I was dreaming of getting the brand new iPhone 6 when I was 12. At that age, almost all of my friends had already received their first smartphones. This trend appears to be the norm now.

At the time, like most kids who did not own a smartphone, I was left out of texting, calling, using social media and playing games. Due to my fear of missing out (FOMO), I decided to create a pitch to my parents as to why I should get my own smartphone and I had some great points: I will only use it for educational purposes, and I will not do this, or that and so on. Naturally, most kids, like myself, will do almost anything to get what they want. I was completely unaware of how much time I would be spending on my smartphone, and how much I would now rely on it. Just like millions of other children in the U.S., I quickly became dependent on my device and eventually developed an addiction to it after a few weeks.

With a new Growing Wireless study which demonstrates that 38 percent of children under two use mobile devices for media intake such as TV shows or games, it should come as no surprise that some people are stuck to their phones like glue, especially when they are introduced and become so familiar with them at a young age.

In fact, giving children smartphones is like “giving them a gram of cocaine,” according to Mandy Saligari, a rehabilitation specialist at Harley Street, a drug and alcohol clinic in the United Kingdom. Salgari noted that parents and teachers tend to completely underestimate how addicting digital technology is for children, particularly for children between the ages of 12 and 15 years old.

Getting my smartphone at the age of 12 still seems young looking back at it now, and I am able to see why I was so addicted. Brightly colored pictures, games and access to practically anything is why most kids are stuck looking down at their screens. Smartphone companies and app programmers are basically wiring phones to look pleasing for all viewers. A poll on mobile device usage from Common Sense Media found that 50 percent of teens said they “feel addicted” to their mobile devices, and 59 percent of parents thought their children were addicted to their mobile devices. Some children become so addicted that they are forced to go into electronic rehab, or e-rehab. In Seattle, one rehab center is treating children who are addicted to their mobile devices in an intensive six-week recovery program to help them detach from their screens.

With new methods coming out on how to combat electronic addiction, some parents have decided to take matters into their own hands by starting a nonprofit organization called, Wait Until 8th. These parents aim to delay the age that children receive smartphones until eighth grade, by encouraging parents to sign a pledge. Their main arguments are that mobile devices are addictive, an academic distraction, alter children’s brains, impair sleep, interfere with relations, put children at risk of cyber bullying and sexual content and greatly increase the risk for anxiety and depression.

My thought process is that if you can’t drive until age 16, purchase cigarettes and tobacco until 18, or even buy an alcoholic drink until 21, then why are children allowed to possess their own digital crack pipes at age 10 when studies show they contribute similar symptoms to other addictive drugs which have age restrictions.

People in the U.S. need to look up from their glowing screens and support future laws and regulations surrounding digital age restriction. In 2017, Colorado proposed a 13 year old minimum age restriction for mobile devices, however was unable to pass the bill. Similar ideas have been brought up in California and other states, but have not been selected to be voted upon. Although there is yet to be legislation that restricts the usage of cell phones for youth, it is evident that the country may be heading in that direction.

If we fail to do so, children might evolve to be more technologically dependent than any other generations—and not in a good way. Smartphones are addictive and create major distractions from the little things in life that matter. A phone is a virtual world that harms the mind, therefore children do not need to be distracted from life any more than they already are. Phone addiction is an issue and the way to combat it is through regulation, take a look around and look at how many people are on their phones. Tons. Realize the consequences and understand the value, phones need to be regulated for safety, health, and a better society.