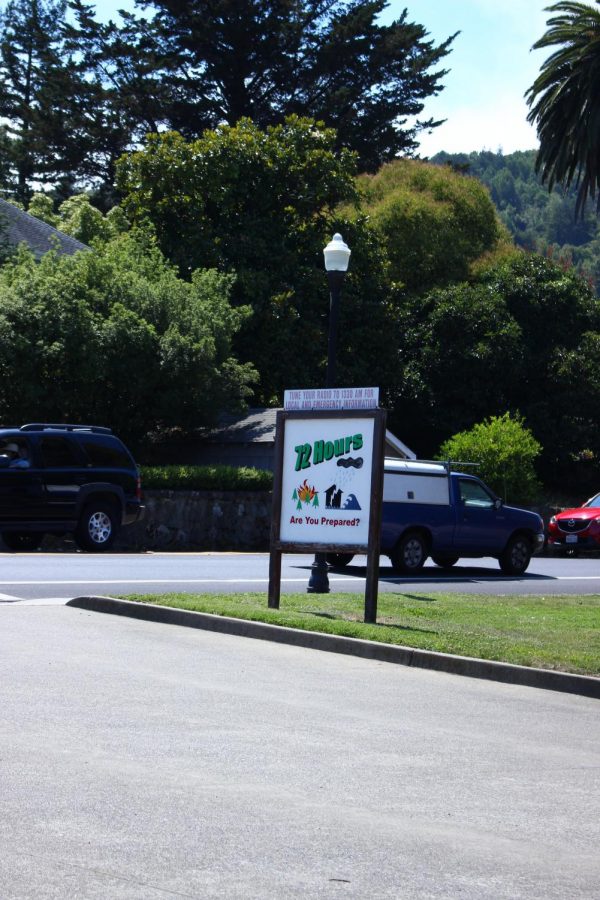 “Are You Prepared” sign, located outside of the police department in Corte Madera.

As fall approaches, people across the country are looking forward to a cooler season. They are excited to witness a gradual shift from green to red leaves, a nice drop in temperature and steaming pumpkin spice lattes. Unfortunately, the experienced Californian knows that instead of a drop in temperature, there soon may be a cloud of gray looming above the state. From May to November, wildfire season is unpredictable in Marin County, especially for devoted emergency responders.

For the past two years, wildfires have ravaged the California countryside, leaving destruction and ash where neighborhoods once stood. According to The Washington Post, the Nov. 2018 Campfire destroyed 14,000 residences and killed 85 people.

Since this fire, counties statewide, including Marin, have taken thorough measures to prevent major wildfire destruction in the future. Don Stasiowski, Deputy Chief of the Central Marin Fire Department, affirmed that the department is taking new measures to heighten fire safety precautions this year.

“The whole county is ramping up, and we’re trying to do more when it comes to prevention,” Stasiowski said. “We are sending crews of people to go check people’s properties and make sure that it is in good shape.”

Overgrowth on private properties can be a huge issue in regards to fire safety precautions. Joe Stewart, Sustainable Agriculture, Ecology and AP Environmental Sciences teacher, knows that certain invasive species can be dangerous to the community and may increase wildfire risk.

“A really good example of an invasive non-native [species] that is a fire danger is eucalyptus trees since they are really high in oils,” Stewart said. “They were brought over here around a hundred years ago, and they’ve really been successful because they come from a similar habitat. They don’t have a lot of natural predators or diseases to keep them in check.”

The importance of maintaining the land can become a life or death situation in the case of a wildfire, especially when the overgrowth appears after an exceptionally wet winter.

According to a press release from Marin County, Fire Safe Marin, a non-profit organization intent on preventing wildfires, has coordinated with the Marin County Fire Department in order to create the Wildfire Prevention Initiative. This measure is looking to apply an additional parcel tax to bring in around $20 million per year.

On Aug. 13, the Marin County Board of Supervisors expressed unanimous support for this initiative, which will undergo a countywide vote in March of 2020.

This initiative only goes so far to protect the residents of Marin County, and, in the case of an actual emergency evacuation, family and neighborhood plans could be essential to staying safe. Martin Wahl is a Corte Madera resident and participant of the Central Marin Neighborhood Response Group (CMNRG), an organization run by residents in Marin to create plans in case of emergency situations such as earthquakes and wildfires. He is impressed with the fire safety commitment and actions taken by the Fire Department.

“There has been very effective communication by the fire department on what you should do to prepare, much more than just to clear the brush around your house,” Wahl said. “There is a coordinated effort among the various jurisdictions [in charge of] open space, such as the State Park and the Marin Municipal Water District, to reduce the fuel usage and PG&E has been scared into compliance.”

Not only has the department sent out fire marshalls to examine the overgrowth of properties in Marin, but it has also sent out a “Living with Fire” magazine that focuses on how each household should prepare for an evacuation. Ranging from a checklist for a grab-and-go emergency kit to the components of a fire-resistant house, this magazine guides families through escape plans and methods for staying in contact with one another during an emergency.

Deputy Stasiowski highlights the importance of having an escape route out of your house and neighborhood and that every family should have an emergency plan.

“There are many facets to being fire wise and prepared. A lot of that will roll over, not only with fires

CMNRG knows that the key to being fire ready and safe is communication. Each family should know where to meet if they are split up during an emergency, according to Fire Safe Marin. CMNRG was created as a means of communication between the residents and the emergency services. According to the CMNRG website, “Let no neighbor be overlooked” and “We are stronger together” are two of their mottos. They have elected and trained block captains who remain in contact through radios and are in charge of keeping track of the residents in their designated neighborhood during emergency situations.

Wahl, a block captain, understands that communication between residents and emergency responders is of critical importance.

“Communication is the key to making any of this really effective,” Wahl said. “We gather information on our neighbors, but it is not publicly available. The people in command can figure out if you have a four wheel drive vehicle, if you have a generator, tents, pumps, etc.”

Fire prevention may be improving, but climate change continues to increase the amount and size of wildfires per year. Deputy Stasiowski has noticed how much these fires have increased in the past 30 years.

“When I first started in the late eighties we worked on wildfires outside of our area maybe once every couple of years. In the last couple years we go about six to eight times a year,” Stasiowski said.

Stewart believes that while humans are helping prevent the fires, they are also the cause.

“There is a weird cycle that occurs with fires because a lot of the things that we do as humans might increase the likelihood of there being a fire,” Stewart said. “We are causing global warming, which creates droughts where it is more likely for fire to burn. But we are also suppressing fires and more fuel accumulates over time. Then, when a fire starts, it is harder to put out as it burns since the intensity of the fire is greater.”

As the amount of fires in California has increased, the paranoia surrounding the issue has as well. Wahl has noticed that people are more aware of fire dangers than they were in the past.

“There is a lot of overreaction,” Wahl said. “In fact, you’ll notice that the sheriff now proactively announces that there’s a controlled burn and not to call 911 because people jam up the lines.”

The first responders have taken it into their own hands to improve the fire safety precautions in the community and many of the residents have noticed and are appreciative of the early safety measures. Although Wahl is more active in fire preparation than he was ten years ago, he knows that wildfires still pose a dangerous threat.

“The good news is that [safety measures and preparation] are getting better,” Wahl said. “We are better prepared than we used to be, but is it enough? The bad news is we may have to find out someday.”