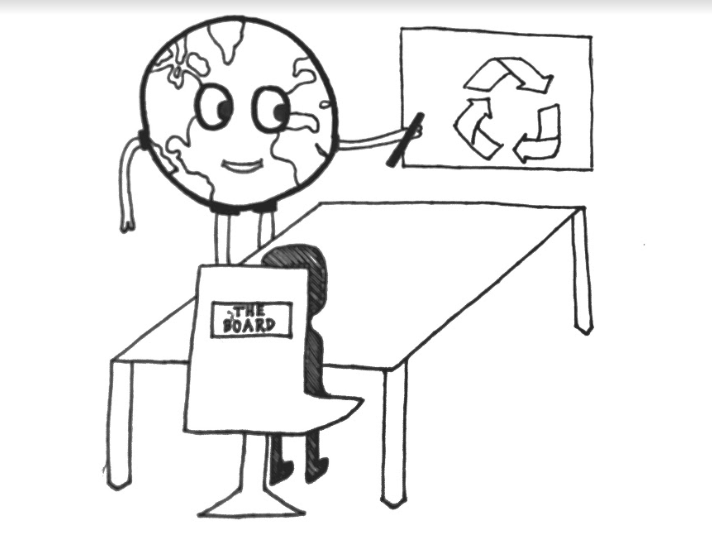 “Global Warning” is a column discussing relevant environmental concerns that our planet faces today. The column aims to provide thought-provoking commentary on such issues and offer reasonable solutions that will propel our world towards sustainability.

Upon Googling the word “capitalism,” the word “profit” is attached to nearly every definition that pops up in the search. Profit maximization seems to be the key driving force of our entire economic system. But where has our greed gotten us? According to Conservation.org, the concentration of carbon dioxide in our atmosphere is the highest it has been in three million years, and 17 of the 18 warmest years in recorded history have occurred since 2000. We are in a climate emergency and our corporate system, which has degraded natural resources over time, must change if we are to meet the 11-year climate deadline set by the UN.

One way to start is by having major companies hire a Chief Sustainability Officer (CSO), whose duties include but aren’t limited to: creating sustainability strategies, monitoring existing environmental concerns and researching new products and programs. Additionally, CSOs should look towards expanding their role to ensure that sustainability is a key pillar in major companies.

One of the most valuable aspects of employing a CSO is that they work directly with the heads of other departments, enforcing a culture of sustainability that reaches into every corner of company operations.

For example, Kathleen Talbot, head of sustainability and business operations at fashion label Reformation, has taken on a new sustainability project. She has begun identifying the various components of their clothing’s fabric dye in order to figure out how to reduce pollution.

Such a process is not an isolated initiative; sustainability officers must be in communication with the department of operations management and the accounting department in order to implement new practices based on findings. Because CSOs are evaluating the environmental status of their company from all different angles, they are in an advantageous position to weave the thread of sustainability throughout.

According to Business Ethics Magazine, even though companies are increasingly devoting more resources and time to shift towards environmentally-friendly practices, a disconnect between business strategy and sustainability still remains. Instead of being part of a corporate narrative or mission that is presented to all stakeholders, sustainability is often only used as a marketing tool with little action to back it. According to a report by the MIT Sloan Management Review and The Boston Consulting Group, 40 percent of the companies examined lacked an effective strategy to ensure sustainability. More frighteningly, 70 percent of executives who responded to a survey by The Conference Board said that their boards spend four hours or less a year discussing sustainability topics. These statistics not only illuminate the need for a CSO but suggest that their roles should be expanded.

A profit-seeking management board might argue that hiring a sustainability executive is too expensive, as boards often care only about financials and believe that they will give up valuable salary space if they hire a CSO. If they cared about sustainability at all, consultants could be hired for a cheaper cost, covering some of the work that a CSO would be assigned to. However, the firm would be missing out on a more impactful role, and short-term consultant work is often not as tailored to the company.

Although every bit of small-scale change does create a positive ripple effect, the most impactful action to save our environment can come only from corporations; they had the power to damage the planet for so many years, but they also have the power to spearhead change.