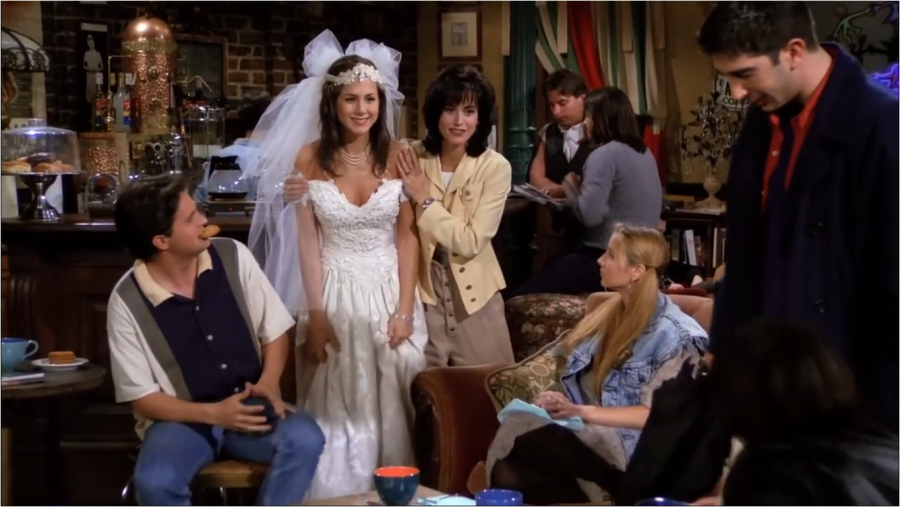 Monica introduces her friend from high school, Rachel, to the gang.

One of America’s most popular and iconic TV shows, Friends, celebrated its anniversary on Sep. 22, 25 years after the first episode premiered. Friends lasted a full 10 seasons, from 1994-2004, and is about a group of friends: Chandler Bing, Monica Geller, Rachel Green, Phoebe Buffay, Joey Tribbiani and Ross Geller, who spend practically their entire adult life together. Throughout the show, there are many relationships and plot twists, but the whole show returns to its main point: they are not just friends, but family. So in celebration of its 25th anniversary, grab some snacks, a blanket and get comfortable to watch these episodes on Netflix with your best friends! Also, minor disclaimer: there are spoilers ahead!

WHEN YOU WANT TO:

Season 4 Episode 1: The One With the Jellyfish — Ross chooses between Rachel and his bald girlfriend, Bonnie. Joey, Chandler and Monica have an encounter with a jellyfish at the beach and one of them steps up to do something none of them ever want to speak of again. To me, the parts with Chandler, Joey and Monica added humor to the episode when talking about the jellyfish, which contrasts the intense scenes where Rachel and Ross were arguing. I really never liked when Ross and Rachel argued because it always came back to the infamous catchphrase “We were on a break!”

Season 5 Episode 14: The One Where Everybody Finds Out — In one of the most famous episodes, Phoebe finds out about Chandler and Monica’s relationship in an unconventional way. She then proceeds to gossip about it with Rachel. I love the way everybody reacts to the news, especially because they all have comedic reactions, such as Ross, who yells when he finds out.

Season 10 Episode 2: The One Where Ross Is Fine —  Rachel and Joey have a dinner date with Ross and his girlfriend, Charlie Wheeler, where Ross keeps saying “I’m fine,” about their relationship, in a frightening tone. The best part of the episode is when he ends up drunk and yells, “I’m making FAJITAS!” and shares a personal love story.

Season 3 Episode 16: The One With the Morning After — Ross tries to stop Rachel from finding out about him sleeping with another woman. They end up having a real heart to heart conversation. If you start to watch this episode without any tissues near you, you might want to grab some because I sure needed them.

Season 9 Episode 21: The One With the Fertility Test — Chandler and Monica secretly go to a fertility clinic only to find out that they cannot have a baby. When I watched this episode, I could only feel sympathetic for them, even though I knew that it was only a TV show. *Little fact: Courtney Cox, who plays Monica, had to film the episode the day after she had a miscarriage in real life, how sad.*

Season 10 Episode 16: The One With Rachel’s Going Away Party — The gang throws Rachel an emotional and heart-warming goodbye party. Throughout the night, Rachel talks to everyone individually. This episode will have you crying for every single minute as the legacy of the show comes to a close.

Season 4 Episode 24: The One With Ross’s Wedding Part 2 — Ross accidentally says “I take thee Rachel” instead of “I take thee Emily” at the altar, which leaves the audience and attendees in complete shock, especially Rachel, who had just talked to Ross right before the ceremony about her feelings for him. I don’t think Rachel should have talked to him about her feelings, especially when he was about to get married. Although she just wanted to tell him how she felt, I personally don’t think that was the right thing to do at a wedding.

Season 8 Episode 24: The One Where Rachel Has a Baby Part 2 — Rachel accidentally says yes to Joey “proposing” to her, with Ross’s ring! I thought this was surprising and influential for the future seasons because after she said yes to him, they started to figure out they had feelings for each other, an aspect that I personally grew to hate.

Season 10 Episode 18: The Last One Part 2 — In the last ever episode, Rachel leaves for the airport to go to Paris for her new job. Monica and Chandler pack up their apartment to move to their new house. The whole show ends in a perfect, yet surprising way. During the episode, I was on the edge of my seat because, in the last few minutes, Rachel does something very unexpected that I’m pretty sure every “Friends” fan wanted.

Season 1 Episode 15: The One With the Stoned Guy — A restaurant owner munches on the gourmet meal Monica cooked as part of a job interview. She later finds out that he is high. It is filled with comedy and jokes that really make it feel like you are in the kitchen with them. I thought the acting was really enjoyable to watch, especially from the stoned guy.

Season 3 Episode 3: The One With the Jam — Monica makes loads of jam to get over Richard Burke, her ex-boyfriend. I loved this episode because Monica making the jam, and Joey gobbling it up –– it made me laugh super hard.

Season 8 Episode 2: The One With the Red Sweater — The girls in the friend group speculate about the father of Rachel’s baby. I loved the surprising ending because the father wasn’t who you might have thought. I also enjoyed the search for the father for the entire episode since it was so crucial to know for future episodes.