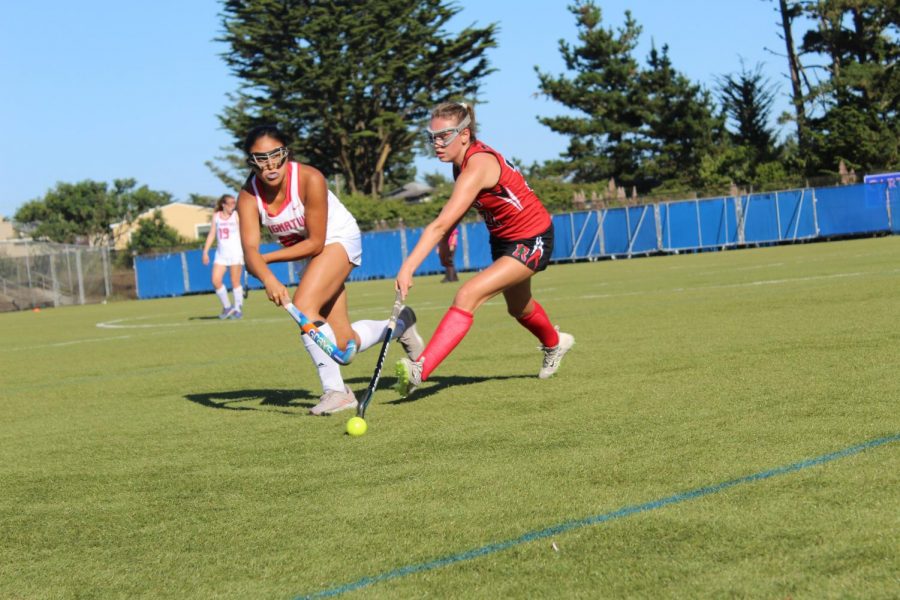 Junior Camille Ray slashes at the puck to stop an SI attacker.

On Aug. 29, the Girls Varsity Field Hockey team competed against an experienced St. Ignatius (SI) team for their season opener. After a hard-fought battle, Redwood fell to the Wildcats by just one point, ending the game with a final score of 1-0.

The Giants started the game off strong, pressuring the opposing team by firing off numerous shots in the first few minutes. SI responded to the Giants’ strong offensive play with swift counter-attack shots, but were unable to break down Redwood’s defense.

As the half progressed, the intensity remained high between teams, leaving the score 0-0 at the half. After the halftime huddle, the Wildcats outplayed the Giants early in the second half byscoring in the first eight minutes. Redwood kept fighting, but was unable to score for the remainder of the game.

Head coach Jen Reidy said that despite the loss she is extremely pleased with her team’s performance, especially against such a competitive program like SI.

“I’m so proud of the girls. SI is a very well established team. They are in a different league, the Blossom Valley league, and they are dominant. For us to show up in our fifth year and play so strategically, aggressively and never give up, the game could have gone either way,” Reidy said.

According to senior captain Camille Goodhart, although the game didn’t end in a win for the Giants, morale remained high. Goodhart says the team feeds off of each other’s positivity, allowing them to start the game prepared and focused.

“We build on each other’s skills and are super positive in our warmups. Our cheer is a really good motivational speech allowing us to get out there ready to play,” Goodhart said.

Sophomore goalkeeper Sarah Steele finished her first varsity game with an impressive 10 blocks. Steele was impressed by her team’s performance, acknowledging that it was their first game of the season.

“Tonight I think my team did well at working with each other and playing as a team,” Steele said. “Typically it takes teams a long time to mesh together and know how each other plays. Considering it was our first game, I am extremely proud.”

According to Reidy, the Giants are ready to improve.

“It’s exciting. This team has really grown up. Some of the best athletes at Redwood are playing field hockey, so the program has transitioned so much in five years,” Reidy said. “The level of play for the first game is amazing, and to lose just 1-0 is fantastic. I’m really energized by where we are going to go from here, and I think we are going to have an amazing season.”

The Giants will take on the Drake Pirates next Wednesday, Sept. 4 on the Ghilotti field.