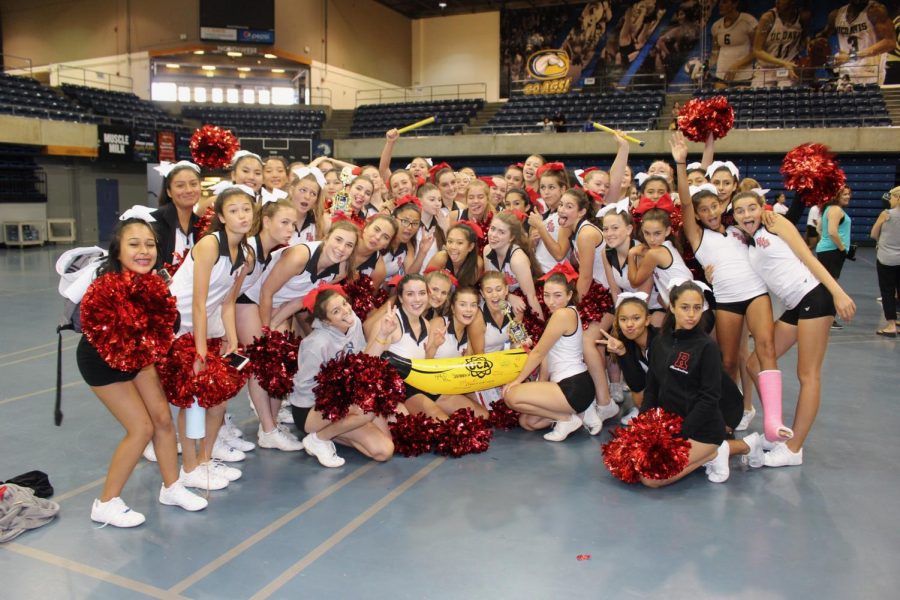 (Courtesy of Shannon McGuinness) Both teams hold up their spirit sticks and bananas.

While many students spent their summers traveling, working and enjoying the break, the Redwood cheerleading teams were hard at work at the University of California, Davis (UC Davis) cheer camp from July 27 to July 29.

The Redwood cheer teams have attended the camp for two years in a row. Before, the teams would alternate between UC Davis and University of California, Santa Cruz, until UC Davis became a preference.

Shannon McGuinness, the current junior varsity and varsity coach, believes that cheer camp is essential to the season.

“It is a great way for the team to get in shape and learn the technique for how to stunt,” McGuinness said.

Throughout the three-day camp, the cheerleaders practiced rigorously, starting at 8 a.m. and ending at 8:30 p.m. The day concluded with awards, in which many of the teams won ‘spirit sticks,’ or ‘the banana.’ The spirit stick is awarded to a team for being cheerful, while the greatest award a team can get is called ‘the top banana,’ which is given to the most spirited team of the day.

Annika Geissberger, a varsity team captain who has been on varsity for three years, feels pride in her team’s performance at the camp this year.

“I am so proud of the outcome of camp. We got a ton of spirit sticks, the banana on the first day and the top banana on the last day,” Geissberger said.

Not only did the cheerleaders perform new stunts or moves, but they also used camp as an opportunity to build team chemistry.

Savannah Williamson, a varsity team captain, discovered more effective ways to communicate with her teammates while at camp.

“I learned a lot about how to be empathetic because as a captain you have to be able to push your team to want to be the best, so we had to know our teammates better,” Williamson said.

According to Geissberger, although the cheerleaders were able to experience three days with their team learning new stunts and forming bonds, the exhaustive nature of cheer camp took a physical toll on the team.

“It is super intense. Everyone cries. It’s a lot of hard work––it’s physically and mentally exhausting,” Geissberger said.

Another challenge at camp this year aside from the emotional toll taken on the cheerleaders was the number of injuries. According to McGuiness, the injuries, aside from being a physical difficulty, are also a learning curve.

“We did have quite a few injuries at camp, far too many for me to name. It was something that teaches us that if one person is out it affects the whole team because even though it is a team sport, we rely on each other a lot more than other sports,” McGuinness said.

Despite the challenges at camp, McGuiness thinks that overall it was necessary for the team and was worth the time and effort.

“Due to the fact that we are together for three days, everyone tends to know each other a lot better after camp and communicate more at practices, along with the fact that their strengths and technique have improved in terms of being able to stunt,” McGuiness said.

After attending the camp and performing through stress, Geissberger believes that UC Davis allowed the team to have a sneak peek of what the team is capable of.

“I think we know that we set the expectations really high for this year because we got to see how spirited we can be and how rewarding it is to do so,” Geissberger said.