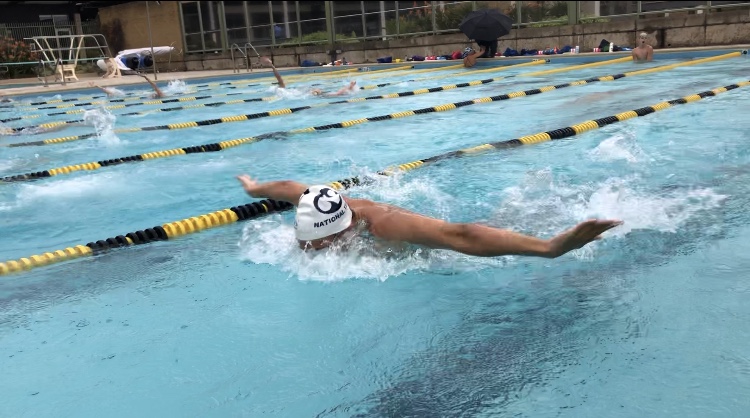 Focusing on technique, this swimmer practices on his butterfly stroke.

“The hardest thing I’ve ever seen is a swimmer trying to take a breath and throw up, then keep swimming,” Don Schwartz, a North Bay Aquatics coach, said. Although this was a one-time experience for Schwartz, he watches his swimmers push themselves with the same intensity six days per week.

North Bay swimmers get up before dawn three days a week to attend weight room sessions at 5:50 in the morning. Later, as soon as the final school bell rings, they are off to the pool to train for another two hours. It is not uncommon for student-athletes to train with such vigor; most are in the pool for 15 hours a week, with extensive in-season travel and early morning practices that limit sleep, according to the National Collegiate Athletic Association (NCAA).

Around 90% of the swimmers representing North Bay Aquatics get recruited to swim in college, according to Schwartz. Many of which are granted full or partial athletic scholarships. Though North Bay’s high recruitment rates may create the facade of an unchallenging transition from junior to collegiate swimming, these spots are not handed out like coupons. College recruiters scout out the best, most hard-working swimmers to enlist to their teams, which cuts slack and creates an extremely competitive playing field for student-athletes. The high recruitment rates of North Bay are a result of the acute expectations swimmers are held accountable for meeting.

“We provide the outline and then we step back and say, ‘Okay, who’s going to come along with us? Who’s going to be a part of this thing that is available, but you have to decide that you want to do it? Because we don’t wear the speedo,’” Schwartz said.

To secure a spot on a college sports team, many student-athletes, like UCSB commit Jackson Mason, prioritize their training over everything else.

The dedication required from competitive sports such as swimming does more than improve athletic performance; it teaches valuable life lessons.

“It’s just something to focus on and be really proud of. It’s something that is a defining characteristic for me: the work that I put in for this sport. I wouldn’t be the same person without it. The work ethic that it has taught me is incredible,” Mason said.

Dedicated swimmers like Mason are extremely fit on both mental and physical fronts. However, because of the time and energy the sport consumes, often times other aspects of athletes’ lives suffer.

“If I didn’t swim I would have a lot better grades. It’s definitely hard to manage school and swimming. You know, I fell asleep last period,” Finn Aunne, sophomore and North Bay swimmer, said.

According to TIME Magazine, student-athletes in college tend to take easier classes and get lower grades than non-athletes. One can argue student-athletes simply prefer their sport over their academics, however Daniel Oppenheimer, UCLA professor, experienced the opposite.

“I’ve taught hundreds of Division 1 student-athletes at several different schools, and they have been among the hardest working students I’ve encountered. The student-athletes I’ve worked with have viewed their sport as a complement to, not a replacement for, their studies,” Oppenheimer wrote in a TIME Magazine article.

Not only do their academics suffer, but time demands serve as a frequent stressor for student-athletes. Managing both sport and academic responsibilities often result in elevated stress, inadequate sleep, and an inability to participate in other extracurricular or leisure activities that help promote overall well-being, according to the NCAA.

Another frequent stressor is pressure to perform athletically, which can be self-imposed or induced by coaching style. According to the NCAA, anxiety and distress from athletic pressure can cause burnout and eating disorders.

Fortunately, many competitive sports teams such as North Bay Aquatics have resources available to assist athletes in times of trouble. For many North Bay swimmers like Finn Aunne, Schwartz serves as a friend in addition to a coach.

“Two days ago, on Tuesday, we had such a hard set. In the beginning I wasn’t feeling too great, but then Don [Schwartz] said his words of wisdom and I had one of the best practices of my life. He always listens to us. It feels like he is more than just a coach,” Aunne said.

The demands of competitive sports are what it takes today to get recruited for college. Student-athletes must be more organized and driven than the average student, as well as endure more physical and mental scrutiny. But, according to Aunne, athletes would not have it any other way.

“I couldn’t even imagine my life without swimming. When I’m in practice and everybody’s just swimming as fast as they can and yelling and screaming, you just kind of get sucked in to it… I’m always tired and I’m always hungry but I love it,” Aunne said.