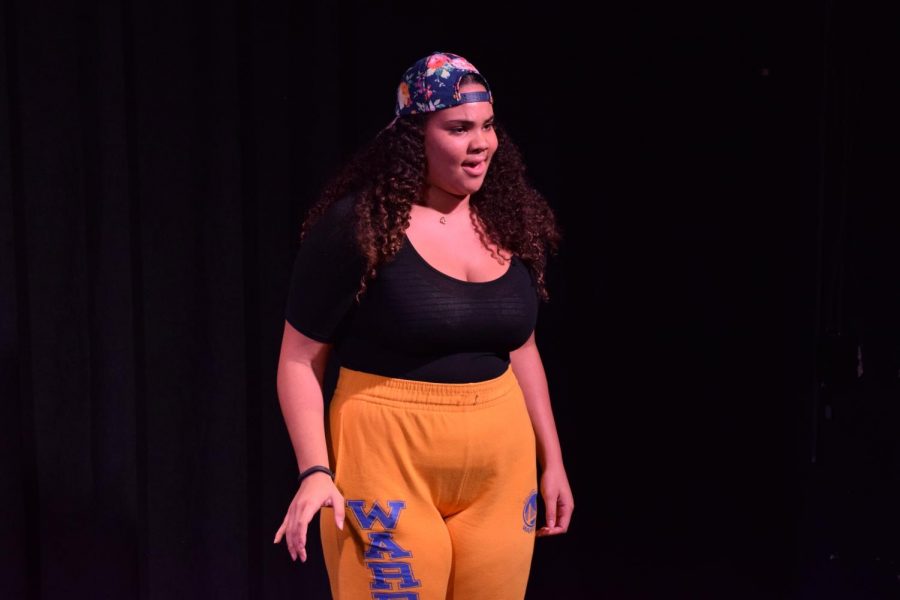 After weeks of rehearsal at the American Conservatory Theater (A.C.T.) rehearsal studio, the day of the show has finally arrived. Hours spent rehearsing have brought the actors together, and through the collaboration of learning novel songs and acting as an ensemble, they prepare to perform in The Garret of the A.C.T.’s Geary Theater in San Francisco. The room’s exposed brick walls and hanging lights create a New York-style setting and contribute to the feeling of an intimate cabaret performance. Aspiring actors throughout the Bay Area audition, practice and perform in theaters such as these, and junior Lili Gibson is no exception.

Gibson’s life has revolved around theater ever since she can remember, and has upheld a balancing act between theater and everything else. The theater has shaped who she is as a person and, for her, is more than just playing a part: it requires and teaches lessons from everyday life as well.

Gibson’s acting career started with small-scale shows, little musicals and plays, but the magnitude of her undertakings grew quickly.

“I think that being so young and being put full force right into [acting] made me see how much I love it,” Gibson said.

Though she continues to act in musicals around Marin, Gibson has expanded her horizons. Four years ago, she joined the A.C.T. cabaret ensemble, a competitive acting program with a strict audition process that selects only the best actors in the Bay Area. She has even performed with the Broadway Princess Party, a show with the greatest Disney princess actresses from Broadway. Last summer, Gibson studied at a three-week acting intensive at the British American Drama Academy, considered an honor in the acting world.

Although Gibson had to work hard to improve her repertoire and acting skills, her decision to pursue drama further came easily. Her first memories as a child are of performing onstage at a young age. She found her calling with the help of her parents, who instilled the value of pursuing her interests into her. From a young age, Gibson attended countless musicals and plays, and she was enrolled in theater, singing and dancing lessons. Her parents also encouraged her to find confidence within herself, and to have no shame of her vibrant personality.

“As a person, I’m very social, very outgoing, and a lot of times in theater there are people who are really shy, and when they get on stage it brings them out. But me, I’m not like that; I’m really open and just being on stage makes me even more like myself,” Gibson said.

However, as her acting progressed, she realized an outgoing personality alone could not carry her to success.

Redwood drama director Erik Berkowitz explained that Gibson has to be able to draw from personality traits that are not a part of her own personality in order to create characters dissimilar to herself.

“There is a lot to her acting that she brings that is not part of who she is as a person. She knows how to go into herself to be able to create characters that are unlike herself,” Berkowitz said.

Gibson has had to use her own life experiences as a guide to portray her roles.

“Every experience that I’ve had, every person I’ve met, every culture I’ve explored, has influenced my acting,” Gibson said.

Not only have her life experiences contributed to her acting but the roles Gibson plays has influenced her own life outside of theater as well.

“For me personally, acting has made me a lot more confident because it is something I can express myself in and something I am good at… Doing musical theater as well gave me a sense of self that I never had before and influenced me as a person to think differently and think deeply about things that are going on,” Gibson said.

Jill MacLean, the A.C.T Young Conservatory director, has worked closely with Gibson and said theater allows actors to empathize with the characters they portray.

As an actor, this art form plays into all aspects of life, and life plays into all areas of the art form. For actors like Gibson, knowing this may lead to ultimate success in the acting field.

“It’s really inspiring, all the things I’ve done, to know that it’s only impossible if you make it impossible, and everyone will always tell you ‘Oh, you’re going to be an actor? That’s so hard, you’re never going to make it,’ but if you never lose your passion and your drive, you can not miss your moment,” Gibson said.