A lack of voter knowledge and participation tears down American ideals 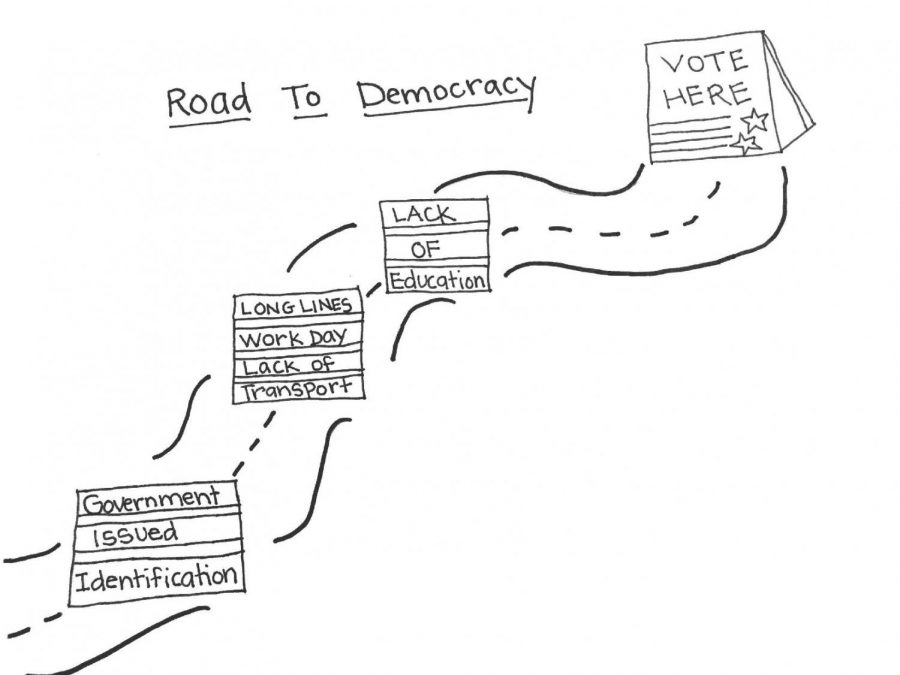 Democracy is a word most Americans understand. It is something inherently American, a fundamental value in our society that is a source of pride and confidence for many citizens. Yet, in the 2018 midterm election, only 47 percent of eligible Americans voted, and currently only a quarter of Americans can name all three branches of government, according to a national survey conducted by the Annenberg Public Policy Center. How can Americans continue to maintain our so-called “valued” democratic ideals if citizens don’t have the understanding or means necessary to voice their informed opinions at the polls?

The answer is: we can’t. However, these issues don’t simply arise when Americans turn 18—they begin in the classroom. Although taking a government class is required for graduation at Redwood, currently only 11 states across the country have no civics or U.S. government requirement, according to the State Department of Education. A lack of government education in high school shouldn’t prevent voters from going to the polls fully informed about the current political issues. The failure to politically educate in the classroom of  should not be the cause of failure on election day. However, if all high school seniors are required to take a government class that educates them about both the workings of government as well as how to decide who and what to vote for, the classroom can evolve into a place that not only inspires greater voter participation but also a greater abundance of informed voters. In doing so, the American ideal of democracy would become reality.

Though education is an important part of the larger issue of low voter participation, there are many other obstacles that result in eligible voters not showing up on election day. According to the Pew Research Center, the United States falls 31st out of the top 35 developed countries in voter participation which in large part could be because of America’s inefficient registration process. Additionally in Australia, which has a 96 percent average voter turnout rate, not only is voting registration automatic for every eligible citizen, but not voting in elections can also result in a $20 fine. This process and voter participation is a stark contrast to the U.S. procedure, where 19 states require identification to register while eight require government-issued identification. For many low income Americans who don’t have the financial resources or time to obtain a current g ID, this requirement prevents them from voting. Though there is variation between states on both sides of the political spectrum, the lack of an automatic voter registration results in many voters being confronted with strict ID qualifications, long registration periods, time-consuming lines at the polls and election day being on a working day.

These factors not only play a part in the overall low voter turnout, but also disproportionately affect lower-income citizens. According to Politico, a news source focused on politics, in the 2012 presidential election, 80.2 percent of Americans with an income of more than $150,000 voted, while only 46.9 percent of Americans making less than $10,000 voted. This disparity of voter turnout among class lines leads to a dangerous level of misrepresentation in American politics. In addition, the support of likely voters was split evenly between Barack Obama and Mitt Romney according to the Pew Research Center, in the 2012 election, however, 59 percent of non-voters supported Obama, compared with Romney’s 24 percent. This highlights how the registered voters and election results don’t always represent the actual American public.

With the American voting process working against low-income groups, elections as a whole remain biased and their results don’t represent the country in its entirety. This class disparity of voter turnout not only has the potential to alter elections and the next generation of American politicians, but also the power to influence significant policy changes. According to Politico, the demographic of voter turnout has a large impact on the policy that is passed following the election.

Without low-income citizens being equally represented in American elections, their wants and beliefs will continue to be ignored and the government will fail to recognize the needs of all citizens and achieve democracy. The United States is often associated with the idea of democracy and representation in America, but how can America continue to preach democratic ideals when within its own borders, a large portion of its citizens is going unheard?

To combat this epidemic of low voter participation and education as well as the class bias of the voting process, the Department of Education should implement a mandatory American government class for all high school seniors that teaches the basic functions of the government, instructs students on ways to gain reliable information on upcoming elections. This curriculum should be standardized across the country and states should oversee districts to ensure teachers or administrations aren’t relaying the information in a biased manner.

In addition, states with high performing students in the subject along with a high percentage of students registered or pre-registered to vote, should, in turn, receive supplementary funding as an incentive. With this greater education, not only would American society be more informed as a whole, but more students would graduate high school with an interest or at least an understanding of politics. This would result in youth being more likely to not only got to the polls on election day but also to fill in their ballot as informed citizens, therefore protecting the American ideal of democracy.

These reforms to civics education, in combination with a national automatic voter registration process for all citizens who turn 18, would enable people of all classes and backgrounds to have the knowledge and opportunity to have their opinion accounted for.

Every election year American politicians preach about the democratic ideals our country holds. However, until my high school peers and I are better educated about the election process and automatic voter registration is implemented, these democratic ideals will continue to be meaningless words at campaign rallies as opposed to reality.