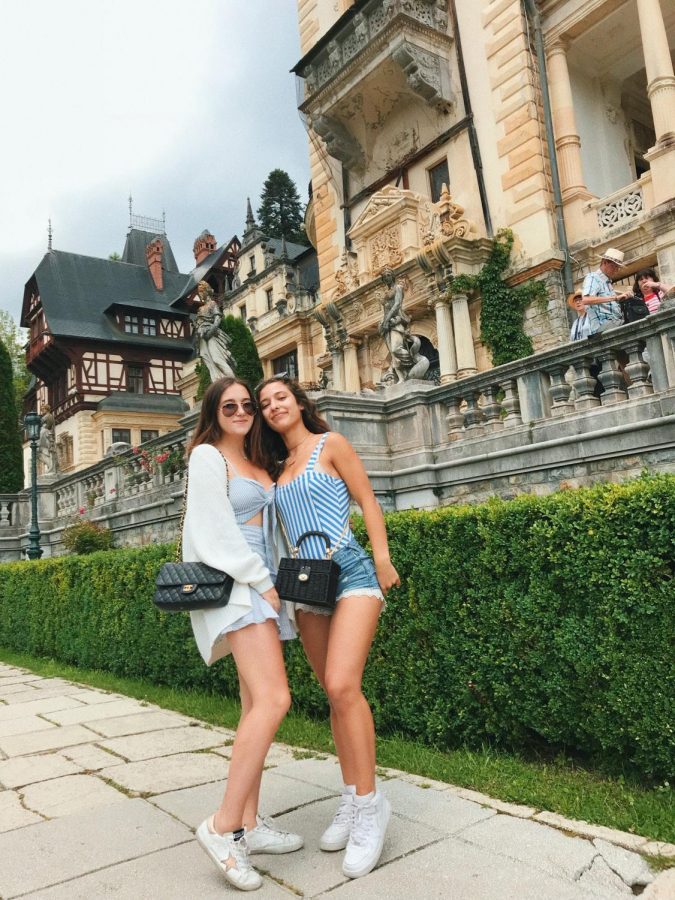 On graduation day, many seniors proudly wear their caps decorated with the bright colors and mascots of American universities that signify the school they will be attending in the fall. A majority of the graduates leaving Redwood, whether it is to college or an alternative path, will remain in the United States. However, every so often there is an Eiffel Tower on someone’s cap amidst the Massachusetts, Arizonas and Californias. As an alternative to attending a U.S. school for the first semester or first year, many universities offer study abroad programs that allow incoming freshman to begin their college experience overseas. Seniors Lauren Conrow and Mary Conner are apart of the small group of students at Redwood that will be departing to London and Paris, respectively, in the fall.

From a young age, Conrow has always loved to travel with her family to get a better sense of not just the various cultures that the world has to offer, but of the places she might want to revisit at an older age. Although jump-starting her college career with a semester in London wasn’t plan A, when Conrow was selected for Northeastern University’s international program, her hesitation towards this unfamiliar program instantly transformed into excitement. The Office of Global Services of Northeastern is associated with 147 different countries around the world, giving students who are apart of the program the opportunity to decide which one of these countries they would like to live in through the semester.

“The program is designed to push you out of your comfort zone a little bit and make you experience things you wouldn’t usually experience here at home,” Conrow said.

For Conrow, she hopes that her love for traveling and the responsibilities she takes on in this program will result in a whole new level of independence.

“Obviously my parents are super present right now in my life and have helped me with a lot of stuff, but in London, we will be on our own taking the Tube because some of the housing isn’t in walking distance [from the university] and becoming more self-assured that we can travel alone,” Conrow said.

Fortunately for Conrow, she won’t leave all familiarities behind as she goes overseas. Branson senior Grace Herbst has been Conrow’s best friend since the two were nine years old and will also be attending Northeastern’s College of Humanities in central London.

“We didn’t plan on going to school together, but it ended up working out that way. We haven’t been going to high school with each other for the past four years, but we still stayed super close, but obviously it’s different from being able to see each other every day,” Herbst said.

It’s evident that the two are excited to be spending the next semester of their life in London together, but Herbst and Conrow won’t just be constrained to staying in London for the entirety of the semester. According to Conrow, the program offers and encourages weekend excursions to many other countries while studying abroad.

“I do hope that I don’t just stay in London. Lauren and I have plans to travel around Europe and maybe go into Asia and other parts of the world. England is similar to the United States in some ways so I would really like to see how other people live and understand the different customs of certain areas,” Herbst said.

Although Conrow and Herbst are thrilled with this opportunity to explore the city of London and other countries, they also acknowledge the fact that they are about to fully plunge into independent living and take on a greater sense of responsibility. While this large step into adulthood seems intimidating, for Herbst, she’s thankful to be expanding her horizons.

“I think it will be a cool experience to let me mature as a person away from my family. Yeah, Boston’s far away from [California], but the time difference and distance [in London] from home will be a good experience for me,” Herbst said.

Similar to Conrow and Herbst, Mary Conner will be journeying overseas to the American University of Paris (AUP), and subsequently the University of Southern California (USC) in the fall of 2020. USC’s Trojan Transfer Plan works with AUP, and similarly to Northeastern, this international program aims to broaden students’ interests and transfer the credits earned abroad back to USC for their sophomore year.

“I planned on going abroad at some point, but I did not plan on it being my first whole year. USC was my dream school, so any path to get there I would take, and even if it is different and new, it’s something a lot of people don’t get to experience, so I should take advantage of this opportunity,” Conner said.

Along with this big step are some challenges that Conner realizes she will face when there, one being the language barrier. At Redwood, Conner has taken four years of French and hopes to become more fluent while in Paris.

“I think it will be hard to adapt to a new city especially when I don’t know the language. I think I’m also nervous about being independent in a foreign country,” Conner said.

Going into a foreign city solo and facing the obstacles that come with it will significantly reward Conner in the future. Whether it’s gaining more independence, speaking a language more eloquently or discovering a new interest, all of these accomplishments will require Conner to demonstrate her maturity and confidence.

Whether it’s in London or Paris, Conner and Conrow will commence their college careers in a way different from many Redwood graduates. Stepping away and disconnecting from day-to-day routines at home, these girls will have the opportunity to take the lead and expand their networking skills in another country.