Global Warning: Our Planet, Our Responsibility 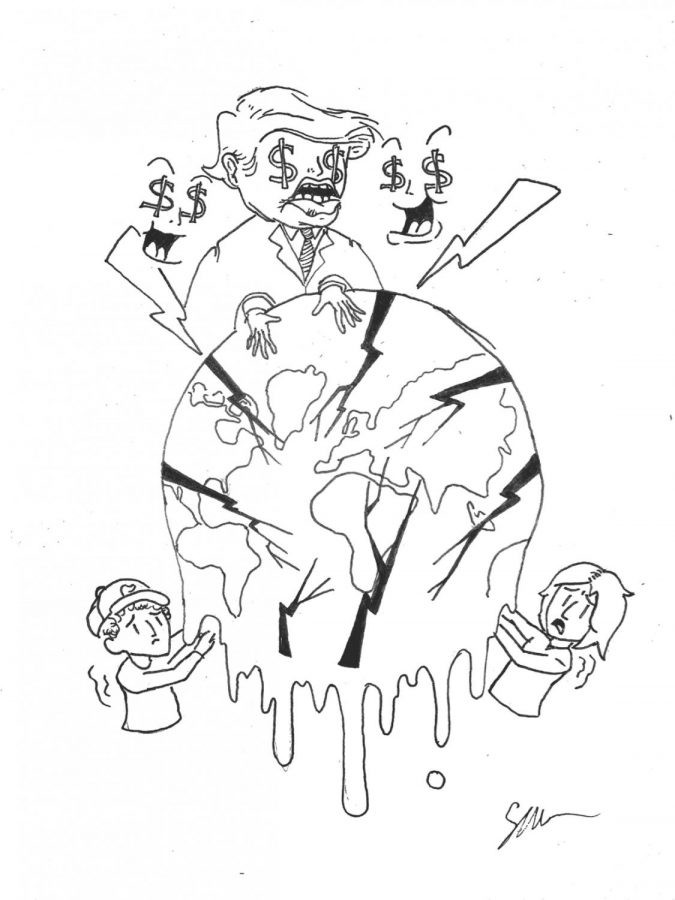 “Global Warning” is a column discussing climate policy under the Trump administration, focusing on the environmental repercussions of proposed legislation in the face of climate change.

When the Notre Dame Cathedral erupted in flames on April 15, the world watched in horror. Across the globe, newspaper publications rushed to cover the tragic event, and just two days after the smoke had cleared, over $1.8 billion had already been raised to restore the Parisian icon to its former glory.

The majority of these funds have poured in from individual European donors, namely Francois-Henri Pinault, luxury goods magnate, and Patrick Pouyanne, Chief Executive of French oil giant Total, who offered $112 million each to rebuild the beloved cathedral.

How can a handful of individuals raise over $1 billion in two days for an iconic structure, but environmental cleanup, research and technology has yet to be heavily invested in despite the years of degradation and destruction that we have witnessed firsthand? Although I do not criticize the generosity of these billionaires, over the past several days I have begun to question the true meaning and impact of their philanthropy.

Where is the empathy for our planet? Why does no one seem to mind that our sea caps are melting and our animals are going extinct at unprecedented rates? How do we expect climate change to absolve itself if no one really cares?

The money that was donated by Pouyanne, $112 million, would have been enough to completely clean up the Great Pacific Garbage Patch, a belt of marine debris particles that spans 600,000 miles in the north central Pacific Ocean, according to NBC 7 San Diego. This gigantic pile of trash, garbage and toxins has been sitting in our ocean for 22 years, and kills over 100,000 marine animals every year; that’s over 2,200,000 animals that have died as a result of our world’s selfish consumer behaviors. The wellbeing of our oceans and ecosystems is arguably more important than any individual building, and should hold just as prominent of a role in our news outlets in order to promote cleanup and garner philanthropic attention.

According to the Intergovernmental Panel on Climate Change, efforts to stabilize levels of greenhouse-gas emissions would require investments of about $840 billion per year through 2030 which would, in essence, allow for society to reverse the effects of climate change and bring global warming to a halt. Although it is unreasonable to assume that our government or the combined generosity of a few billionaires could cover this amount—even though they can—it is not irrational to ask donors, nations and individuals to gear a larger portion of their investments and philanthropic efforts towards helping our planet.

I understand that Notre Dame holds tremendous meaning for many. It survived multiple wars and upheavals over the past few centuries, and it still manages to remain one of the world’s oldest, most beautiful structures located in the heart of a beloved city. But what about the strength, resilience and undeniable importance of our planet? It is time to gear our generous philanthropic efforts toward upholding the wellbeing and security of our planet to protect our communities, our ecosystems our societies and even future generations. It is time to invest in the future of our planet before we face an uninhabitable demise.

Our planet, as we know it, has been given a deadline: 135 months, according to The Guardian. One-hundred and thirty-five months are left to save ourselves, our grandchildren, our beloved animals and the only place we have learned to call home. What’s going to matter more in 10 years—the safety of our citizens and the wellbeing of our planet, or restoring a national monument?

Stop ignoring the science that should be alarming us. Tackling climate change requires nothing less than a revolution of the empathetic imagination. If you love our planet, work to keep it that way.

To conclude my column, I would like to quote The Lorax: “Unless someone like you cares a whole awful lot, nothing is going to get better—it’s not.”