What will you do with ‘104 days’ of summer vacation? 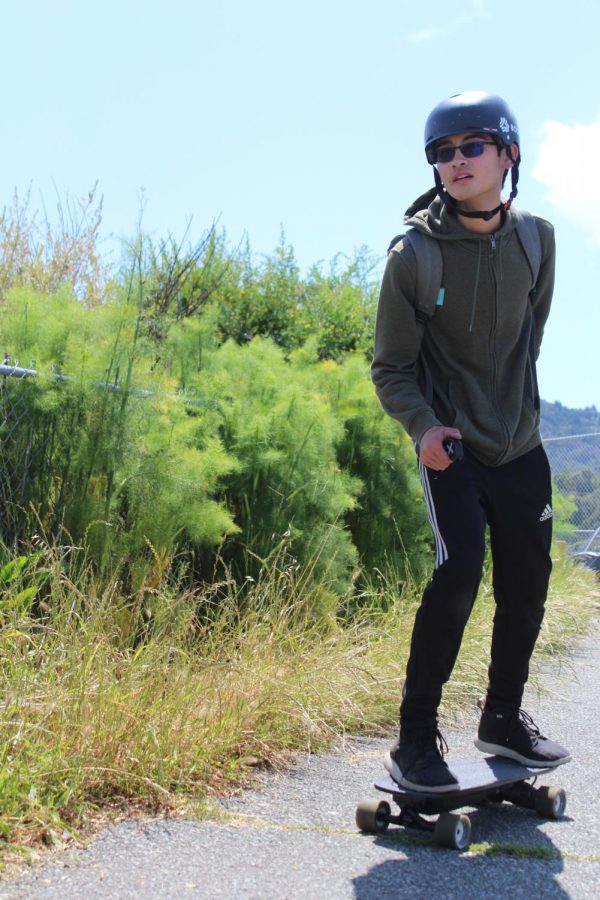 Summer vacation serves as a time to have enlightening experiences and relax after a grueling nine-month school year for most high school students. Whether students are laying on the beach under the gleaming sun, touring the towering ruins of Rome or spending time with their friends, this will be the seniors’ last summer before they part ways.

Here is a deeper look into what some seniors have in store this summer vacation.

Senior Richard Seidel will attempt to set a world record this summer for the longest ride on a commercially-available electric skateboard. He will travel from Larkspur to Los Angeles on the Boosted Board where he will be riding at an average speed of around 20 miles per hour for two to four days.

“I think biking, for example, is a lot of fun. But for [the Boosted Board], it’s just a matter of hitting go and you ride forward. That’s it. So it’s kind of where a practical tool meets something fun like snowboarding,” Seidel said. “It’s something that’s practical, economical and honestly quite cheap to maintain. And it’s just the way I get around. It’s also a great way to clear my mind with the speed and the adrenaline because I get that fresh breath of air.”

Seidel is also planning to intern this summer, building on his current enrollment in the Pathways program, which gives students an opportunity to intern as well as take classes at College of Marin. In addition to his current internship, which he plans to continue during the summer, Seidel is exploring options to intern in Germany for auto companies.

Seidel has been interested in engineering and business since a young age and believes that interning allows him to experience the best of both worlds.

“Getting this exposure early on is something that really motivates me and is quite fascinating to see. It’s something that you can’t learn as easily in a traditional classroom. You can’t just take a business class and learn all about this, you have to kind of be actually doing it to learn about this,” Seidel said. “So being able to learn about this at such a young age, I think it’s important for what I want to do.”

Senior Stevie Gould has played in multiple national junior tennis tournaments over the years, but he plans to elevate his play this summer by competing in multiple tournaments in a Pro Tour in France for two weeks. Not only will Gould have the opportunity to play against players from around the world, but each tournament has monetary prizes.

“Being able to play guys from all over Europe and the world, that’s just going to be different types of players and different people. Obviously, they’re all going to be really good players as well, so playing those people will definitely help my game,” Gould said.

Attending the University of Washington next year to play Division One tennis on a scholarship, Gould will focus on improving his skills and competing in other tournaments before the fall to prepare himself for the collegiate level.

As part of that plan, Gould will travel to Seattle to become more familiar with the University of Washington campus as well as become more accustomed to his future coaches, team and general surroundings.

“The more I can bond and spend time with my future teammates the better. I’m going to be spending time with these guys once they get there, so might as well start early and get to know them,” Gould said. “Another great thing about being there with my teammates is getting used to working out with the team, getting used to playing doubles with the other guys on the team and figuring out which teams work best with each other.”

Although many seniors are planning on traveling abroad for short vacations or excursions, senior Lia Gubau is spending her entire summer in her hometown of Barcelona, Spain. She will also separately explore the city with her friends for two weeks. Originally from Barcelona, Gubau has traveled there every summer since she moved to Marin in middle school, but this is the first time any of her friends are visiting.

“Since I’m from [Barcelona], I’m excited to show [my friends] around where I was born and hopefully they can learn about Spanish culture while we have a good time,” Gubau said.

Gubau will be able to help her friends in finding activities to do while they are visiting, such as tour La Sagrada Familia, a partly-built Roman Catholic church, in the day and attend concerts at night.

“On the trip, we will do a mix of typical things that you would want to visit in Spain, but then I made sure that my friends and I included some stuff that you wouldn’t get on a touristy trip,” Gubau said.

While all but one of the friends traveling with her will be attending college in California next school year, this summer will give them an opportunity to continue building their friendships with one another and strengthen their bond before they part ways.

“We really want to live it up and the do the best we can to spend time together and really enjoy each other … These are my friends that I really connected with and I’m excited to have my best friends come over to my family’s house in Spain,” Gubau said.