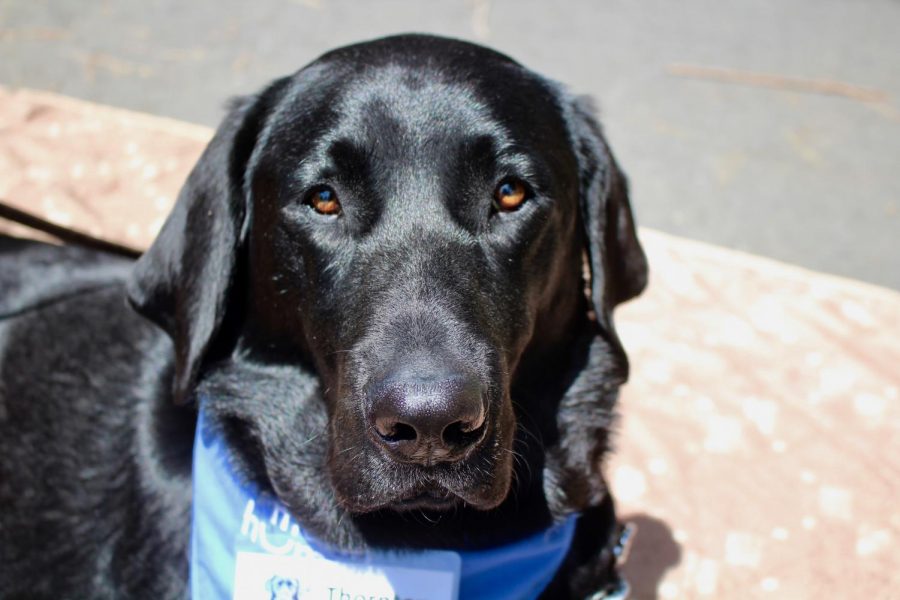 During the final days of the school year, the campus is buzzing with stress surrounding finals and deadlines. Amidst the unbearable energy, a source of calm can now be found walking around the Wellness Center at lunch in the form of two therapy dogs, Thornton and Rocket.

Every Wednesday and Monday at lunch, one of these certified therapy dogs will be present on campus for all students and staff to interact with. Led by Marin Humane Society volunteer Madeleine Metzger-Geloso, Thornton, a three-year-old black lab and certified therapy dog enjoys laying in the sun in the quad and allowing passersby to pet him. According to Metzger-Geloso, Thornton’s owner, the visits to campus are easy for Thornton as he has visited Hall Middle School, Marin General Hospital and various other locations in the past to volunteer. Being a Redwood parent and a substitute teacher in the district, Metzger-Geloso wanted to start this weekly program at the school to reduce student stress.

“When I was subbing, I noticed kids that had attention issues and they needed a break from the class because they just couldn’t handle it. So I said, ‘I just adopted this dog from Guide Dogs[for the Blind] and we do therapy work at Marin General. I wonder how [the Wellness Center] would feel about having a therapy dog at the school?’” Metzger-Geloso said.

As a puppy, Thornton was in training to become a guide dog, but due to his tendency to be distracted and affectionate, he had a ‘career change’ and made the transition to become a therapy dog. He and Metzger-Geloso have been part of the therapy program at Hall for two years. According to Metzger-Geloso, not only does Thornton enjoy his time volunteering, but she herself treasures the opportunity to serve the community and allow those at the school to get to know her therapy dog.

“I think it makes more of an impact to have a regular relationship because once the students get to know him, they look forward to him. It’s just such a happy, joyful way to kind of serve in the community,” Metzger-Geloso said. “Being a part of Guide Dogs, we always knew [Thornton’s] potential was great and that he was really worthy of just doing great things. They always called him kind of a diamond in the rough, so now I think he’s really shining.”

For the past few years, the Wellness Center has held a special event with therapy dogs during finals weeks called Pause for Paws. During these events, therapy dogs such as Thornton make visits to campus at lunch and interact with students. According to Wellness Outreach Specialist Cera Arthur, the benefits of having the dogs on campus led her to organize more frequent visits.

“It was a district-wide decision and the counselors all decided that they saw the benefit of dogs, not only for finals,” Arthur said. “When you can see someone from far away smiling and running over to the dog, it’s really positive. I know last week we actually walked over to the AP exam as [the students] were waiting, and they were all so happy.”

Metzger-Geloso sees changes in students’ mindsets when they see therapy dogs on campus. She believes that the unconditional love from the dogs can ease the stress many students may feel on a daily basis, such as in the case of the AP students waiting to take their exam and their responses to Thornton.

“It was a relief. [The students] just felt like, ‘Oh, I really needed that,’” Metzger-Geloso said. “It’s like eating comfort food. I think having a dog is putting you at that comfort level of reminiscing about your own dog and happy times and kind of brings you to a good place in your mind.”

The Wellness Center has been working on reaching out and informing the community of the therapy dogs in an effort to get students more involved. As many are unaware of this new program, students, such as senior Jackson Barry, are often pleasantly surprised to run into the dogs around school.

“Seeing the dog relaxes me. You know, I can go do my homework now. It’s great,” Barry said.

Senior TJ Ross especially enjoys seeing Thornton at Redwood, as he has his own dogs that stay at home while he goes to school.

“You know, it just reminds me of my labs back at home,” Ross said. “We’ve got a lot of dog people around this campus, so this is great.”

Aside from the mental health benefits of the program, Arthur also believes the therapy dogs can help students further develop other life skills.

“Another really awesome [aspect] is some really awesome modeling that dogs can do for empathy and inclusion. I think those are so important. And also modeling of how you take care of something like a living creature, like how to pet it and be gentle and things like that,” Arthur said.

According to Arthur, the Wellness Center is hoping to grow this program next year and potentially have the dogs visit classrooms to spend time with students and teachers. For now, Rocket and Thornton can be visited outside of the Wellness Center during lunch on Mondays and Wednesdays. Metzger-Geloso also hopes to see the dogs continue their work at Redwood, as she has seen firsthand just how much of a difference a visit with them can make.

“I noticed in the hospital that I don’t know anything about the history of these people, but I walk in the room and they forget about their pain. They just interact with this dog,” Metzger-Geloso said. “I think it just breaks down all barriers on such a human, intimate level. I think with the students here there may be some social nuances going on or conflicts, but they forget about everything when they reach down and touch a dog. It’s acceptable to just love a dog.”