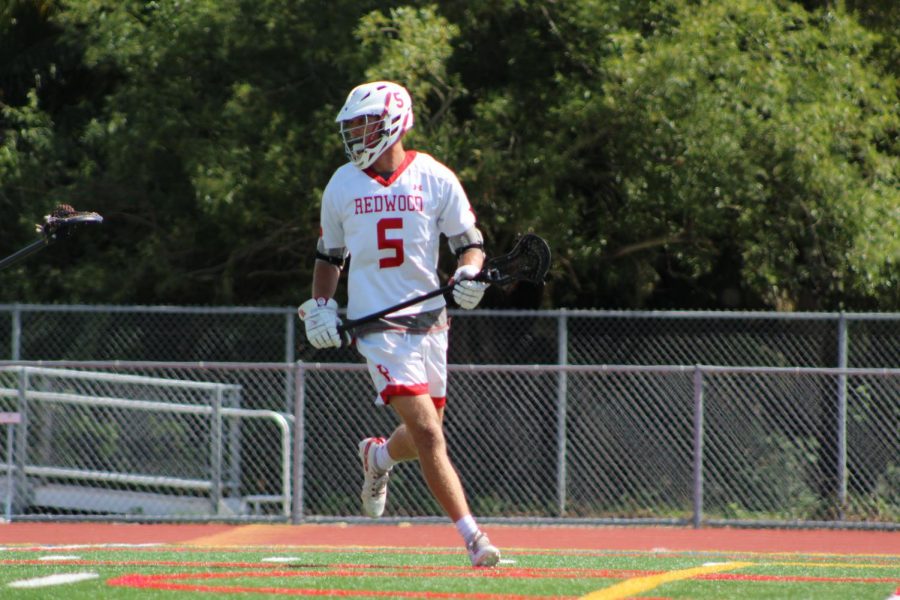 Playing sports at the collegiate varsity level entails days on end of practicing while also having to balance school and social activities. For the athletes who want to play their sport past high school, but not at the highest level of commitment (Division One (DI), DII or DIII level), there are club sports which any athlete can tryout for if they are interested in continuing to play a sport in college at a competitive level. This happens to be the case for many athletes at Redwood including seniors Alex Aguero, Georgia Bennett, Harri Hetrick and Jackson Barry.

For Bennett, soccer has been a part of her life for almost 12 years. It is ingrained into her schedule with daily practices for either her high school or club soccer team: the sport helps to define her. Although she didn’t pursue soccer at the collegiate level, Bennett isn’t ready to let it go and feels that playing club at the University of Washington will help her stay connected with the sport as well as allow her to meet many new friends.

“I played at Marin FC all throughout my life and that’s where [people from] different club teams come together so I was able to meet lots of different people from different high schools,” Bennett said. “Being able to play soccer and meet a lot of new people will be a really good platform.”

Similar to Bennett, Barry has been playing baseball since the T-ball level and feels that playing club will allow him to meet others. These reasons ultimately influenced him to bring his baseball talents with him to the University of California, Los Angeles (UCLA). Since the DI team is highly ranked, Barry decided to take the more relaxed route where he will be able to simply enjoy the sport of baseball.

“I’m super sad that the [Redwood baseball] season is ending soon and obviously I can’t play on the UCLA varsity team. With that [in mind], I just wanted an activity to find friends there and I want to continue playing baseball,” Barry said.

Aguero experienced a more unique situation. He was previously committed to play D1 football at the University of San Diego (USD), but rethought his decision after being accepted into California Polytechnic State University (Cal Poly) in San Luis Obispo, where he intends to pursue his career in rugby by playing on the club team.

With this new plan in mind, Aguero looks forward to continuing to play on high-level rugby teams while also prioritizing his life as a student. At Cal Poly, he hopes to continue to further his academics in the classroom as well as being an athlete. Even though he may not be playing at the highest level, he feels that he will experience a similar level of competitiveness while also being able to have a well-rounded college experience.

Aguero’s decision to play rugby instead of football was influenced by the overall feel surrounding both sports as he enjoys certain aspects of rugby more than football, which tends to be a more competitive environment.

“[Rugby is] a really great game and the whole brotherhood aspect [is special]. After the games it’s a community and it’s not like in football where there’s always rivalries,” Aguero said. “After the games, you don’t really come together and have dinners [in football], which we do after almost every rugby game. You get to know the other guys [in rugby], it’s just a really loving community.”

For Hetrick, he initially pursued an opportunity to play lacrosse at the DI level. Unlike most sports, in collegiate men’s lacrosse there aren’t any men’s DI teams west of the University of Utah as most are back East or in the Midwest. With this in mind, Hetrick wasn’t able to pursue recruitment to the California schools he was interested in so he aimed to attend universities on the East Coast.

Through his recruitment process, Hetrick had his mind set on four main schools, and when these opportunities became extremely competitive for the small number of spots on each team, he began to explore the option of playing club lacrosse at a large school on the West Coast. With this in mind, he applied to other schools and now plans on playing at the club level at the University of Southern California (USC).

Hetrick is looking forward to bringing his talent in lacrosse to a new team, while also attending a top-ranked school. His connections with current and incoming teammates will also help the team continue to build and achieve success at the club level.

“There’s four or five guys who played at some of the D1 schools I could’ve played at and they [transferred] and are on the USC team. Also, there are guys that are going to USC in my grade who are pretty good who will make a large impact,” Hetrick said. “I think the team is going to have a high level of [play].”

Both Aguero and Hetrick look forward to continuing to play the sport they love and with that will come a high level level of competitiveness. At the club level, they will continue to stay in shape through the many practices and games. For Aguero, the rugby season requires lots of physical preparation.

“Rugby is a really tough sport. You need to be super fit and you need to be able to withstand injuries, so it’s really competitive and if we’re going to play competitive teams, we have to try to match that as best as possible,” Aguero said.

Even though all athletes hold their own motives for playing club sports in college, they all share one common desire: to continue on with the sport they are passionate about.

“Regardless of whether you’re committed to play a sport or you’re going to play club or intramural, I think that just playing a sport is a really good way to continue doing what you love, and if it’s a sport you’ve grown up playing your whole life, you can keep doing that,” Bennett said. “It can be a good way to help you get acclimated to wherever you’re going to school because you meet so many new people. It’s another activity that you know you always have and you’ll always have that group of people.”