The most Giant moment in sports from the last four years 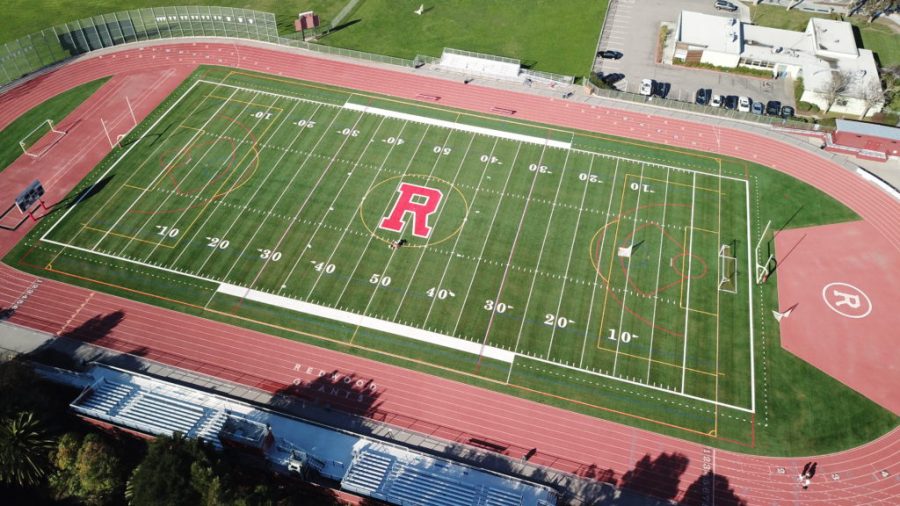 Going into the season, the lady Giants had high expectations for the season. With seven seniors on the roster committed to play in college, such as captains Elly Lundberg and Lily Barber, this star-studded side ran away with the Marin County Athletic League (MCAL) title with ease, going 14-0 in the regular season. After taking care of San Marin in the semifinals in straight sets, Redwood faced Marin Catholic (MC) at College of Marin in a rivalry match for an MCAL championship banner. After beating MC in the previous two meetings, sweeping sets in both matches, the Giants were confident going into their final MCAL battle. However, the atmosphere of a championship game got the best of Redwood and they found themselves in a 2-2 tie with one set for all the marbles. In this tightly contested final set, substitute Amanda Lamar came in and provided a spark for Redwood with several huge kills and blocks. This momentum was enough for the Giants to take the last set and complete the double banner season. Senior Ella Spaethling, whose sister Marguerite was on the team that year, believes that the moment was so special because of how talented the senior class was at that time. It is hard to find any class with that many athletes going on to play in college for any sport, and that championship was the culmination of their hard work and dedication.

Leading into this highly entertaining game, Redwood had rolled through the MCAL regular season much like years in the past. However, according to senior Luke Elders, who started on this team as a sophomore, the season was quite up and down. With the MCAL being filled with such easy competition, the Giants had to get some experience through playing out of league games. Losing seven of these tough out of league matchups, Redwood had not shown that they could take care of a decent opponent like the one waiting for them in the final: MC. The Giants had trouble figuring out the zone defense MC threw at them but still managed to go up 2-0 with goals from Cameron Breck and Reyn Reeser. MC then stormed back late in the game, erasing the two-goal lead and tying the game up 2-2 in the fourth quarter. With time running out, Brendan Hackett got the ball right in front of the crease and buried the game-winning goal to secure a win in a defensively oriented game. According to Elders, every year leading up to that one had been a building year for the seniors and finally getting the MCAL banner was a special moment for that senior class.

This championship squad took a very different route than the volleyball and lacrosse teams. After starting out hot, Redwood lost one of their best players and leaders, Anthony Pomilia, on top of two others quitting the team. According to current senior pitcher, Kyle Felder, this shook the chemistry of the team and the Giants started losing key games after that point. Going into the playoffs as the fifth seed and not pitching well, hitting well or playing good defense, this team needed a miracle to win the championship. With offensive help from Dane Goodman and Mackie Skall and pitching from current junior Nick Welch and senior Robbie Wilson, the Giants pulled off two upsets in the quarter and semi-finals and reached the finals to face the Drake Pirates who had defeated Redwood in the previous two games during the regular season. With the score all tied up 1-1 at the end of seven innings, the Pirates were forced to take out their star pitcher Ryan McLaughlin, who went onto win MCAL Pitcher of the Year, due to pitch count, and the Giants capitalized by scoring three runs in the eighth inning to complete the massive upset and bring home the MCAL championship. Felder says this moment was so memorable because, despite all the ups and downs the team endured throughout the season, they were still able to come out on top.

After coming into the year as the top-ranked boys cross country runner in the nation according to MileSplit, senior Liam Anderson was the favorite for every race he ran this year. After placing third in the event his junior year, Anderson justified his rank by winning the Nike Cross Nationals and being the first ever to run a 5K in under 15 minutes at the Nike Headquarters in Oregon. He then racked up the accolades by winning the Clovis Invitational, running a two-mile course in eight minutes 52 seconds at the Arcadia Invitational and nearly breaking an MCAL record mile time by coming in at four minutes and eight seconds. The culmination of all these accomplishments came on Feb. 27 when Anderson was awarded Gatorade National Boys Cross Country Runner of the Year with a huge reception in Redwood’s Covered Eating Area. He was the first ever California native to win the award and the first ever Redwood student to win any Gatorade National Athlete of the Year award.