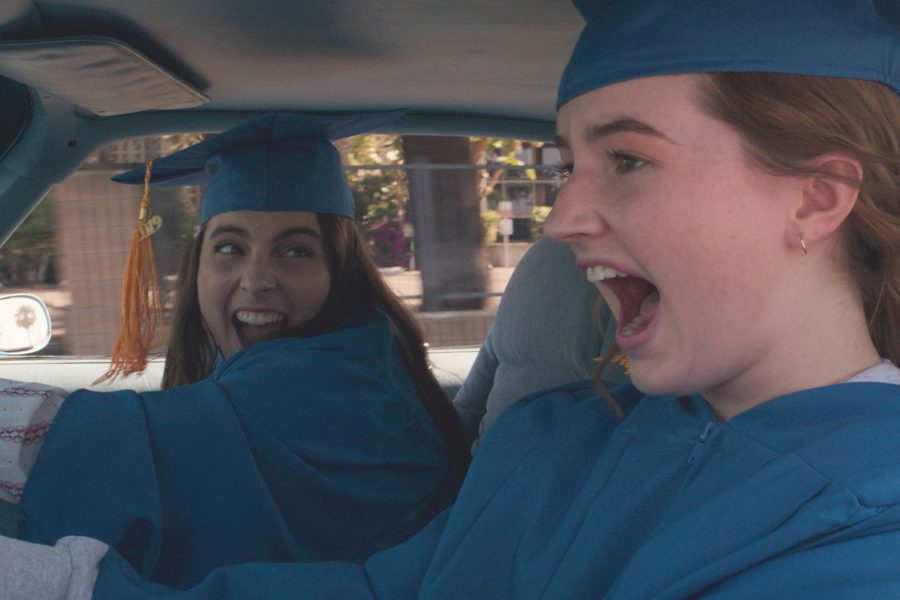 Zooming away, Molly (Beanie Feldstein) and her best friend Amy (Kaitlyn Dever) speed to their last day of graduation in the movie Booksmart directed by Olivia Wilde.

With every new generation of adolescents emerges a high school movie that becomes a cornerstone for the times. No matter the age, the vast majority of Americans are familiar with iconic movies such as “Grease,” “The Breakfast Club,” “Clueless” and “Ferris Bueller’s Day Off.” Decades have passed since the public decided to claim the next sensational film as their own, yet now may be the time for our generation to claim a new high school movie as the one that defines us—Gen Z—with the new movie “Booksmart,” directed by Olivia Wilde.

By portraying all-nighters, partying on a school night, fake IDs, oh yeah, and a whole lot of drugs. “Booksmart” hits the mark of every typical high school cliché. However, the raw perspective into the real and relatable side of the high school experience is what drew me in. It highlights the stories of valedictorian Molly (Beanie Feldstein) and her best friend Amy (Kaitlyn Dever) on their last day of high school. College has been Molly’s primary goal throughout high school and she hopes to follow in the footsteps of women like Susan B. Anthony and Ruth Bader Ginsburg to one day be the youngest supreme court justice. However, Molly is surprised to find that her classmates who partied every weekend still managed to get into Ivy League universities.

Through the film, Molly and Amy’s experiences are constantly captured on Snapchat and Instagram, and they travel around Los Angeles in Lyfts throughout the course of their last night as high schoolers trying to find THE party. The protagonists are realistic, new-wave, teen feminists that chose to release themselves from expectations and party all night. Whether their interactions be awkward run-ins with the principal or uncomfortable conversations with a crush, the film reaches out to the girls of our generation by using real and relevant stories—an aspect that recent movies have yet to do. The film also casually depicts lesbian relationships, and even goes as far as to destigmatize female masturbation, something that has been widely disregarded by society. Wilde not only depicts a funny story but does so by making a societal statement, which is impressive.

Through the film, an easily recognizable ensemble of up-and-coming actors graced the screens, as well as classic performers. Right off the bat, Molly was easily identifiable from the movie “Ladybird,” where she played Julie Steffans (Ladybird’s best friend). Jared (Skyler Gisondo), the richest kid in town, can be seen in the comedy “Vacation.” Amy’s mom was an all-time favorite, Lisa Kudrow, from the hit sitcom “Friends.” Many of these actors are familiar faces, but put on a new show that made the film compelling to watch.

Wilde proceeds to break barriers through the depiction of the high school experience. In most typical high school movies there are the jocks, nerds and cheerleaders. Wilde initiates the film by filling in the expected clichés and then proceeds to break them all down and rebuild the characters as complex, dynamic individuals. As a high schooler, the perspective into the true and complex nature of our peers resonates throughout the film.

While the movie’s explicit humor or controversial topics may have turned some viewers away, the general consensus was that of great appreciation for Wilde’s astonishing creation. Wilde did what very little people want to do—she returned to the true nature of the high school experience and adapted it to fit modern-day standards, acing it.