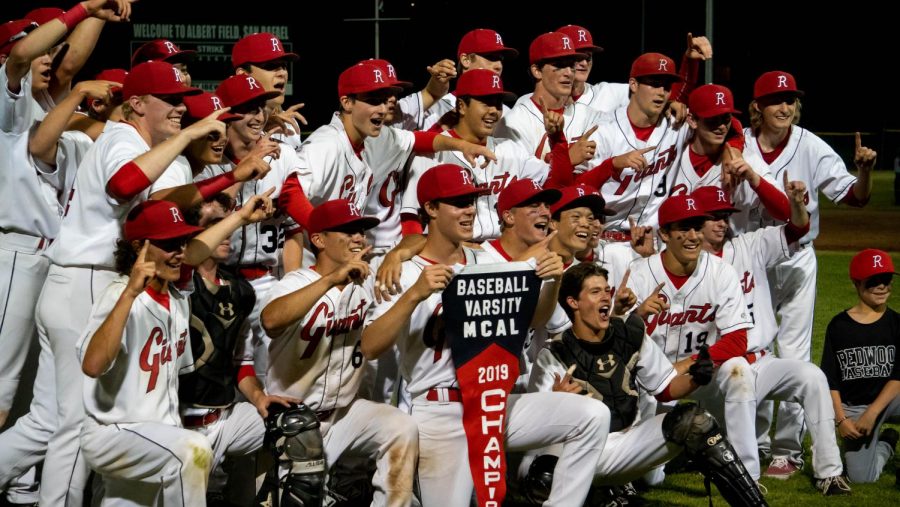 After students cleared the field, the players smiled for photos.

On Friday night, May 10, Redwood students poured into the bleachers at San Rafael’s Albert Park to watch the boys’ varsity baseball team take down Drake High School in the Marin County Athletic League (MCAL) championship. Drake students were dressed in a blackout theme and, despite their spirited chants throughout the game, the Pirates were unable to secure a win. At the end of the seventh inning, Redwood was victorious 6-4.

The Giants started off energized offensively, with sophomore Ben Cohen’s two RBI single bringing the score to 2-0 in first inning. Senior starting pitcher Kyle Felder was lights out from the first pitch, throwing  6.1 innings, having eight strikeouts and only giving up two earned runs. According to senior catcher Jake Nordstrom, the first innings of the game set the tone for the win.

“We really came out strong in the beginning, we had a really good intensity level and everybody was on their game. Felder came out and he was throwing hard, hitting his spots and he was really focused. I think everyone was really dialed in and everyone took advantage of [Drake], even in the first couple of innings,” Nordstrom said.

According to Felder, this championship was the most significant game that he has ever played in.

“I haven’t pitched in this big of a game before, so I was a little nervous, but I walked the first guy and that didn’t help. Then after the first inning, I felt pretty good,” Felder said.

After a home run in the third inning by Drake’s Eamonn Lance, Redwood’s Ben Cohen and Alex Hagen responded by both crossing the plate, making it 5-1 Redwood.

Redwood continued to advance their lead, as Hagen scored another run in the fifth inning to make it 6-1 Redwood. The team managed to keep Drake from scoring until the last inning.

Juniors Jesse Gassman and Lucas Roy both pitched in the seventh inning, with Roy closing out the game. Although Redwood appeared to dominate most of the game, Drake gained momentum as they rallied to put  up three runs in the last inning. The cheers from the Drake crowd heightened, giving the game some extra edge. However, Drake’s last-minute effort was not enough. When it was all over, a hoard of Redwood students jumped over the fence and stormed the field, crowding and shouting around the celebrating team.

“[Winning] probably felt better than last year, so that was great. It was just such a rush of emotion and we’ve worked so hard to get here and put in so many hours of countless drills,” Nordstrom said. “It was a really great moment to see all of it come together like it did.”

Head coach Mike Firenzi also reflected on the effort and dedication it took to get the finals.

“This team took a lot of gut punches; we lost a few, then we’d win a few, but we always talked about this from January that we want to be in this Friday night game at Albert Park for the MCAL championship,” Firenzi said. “And yeah, there were times where it wasn’t looking too good, but we kept fighting and we started winning the games we needed to win.”

The win was the team’s second straight MCAL championship and they earned the top seed in the North Coast Section (NCS) tournament. Their next game is Wednesday, May 15 at home against Bethel High School.