Unknown to well-known: the story behind the painted faces in the crowd 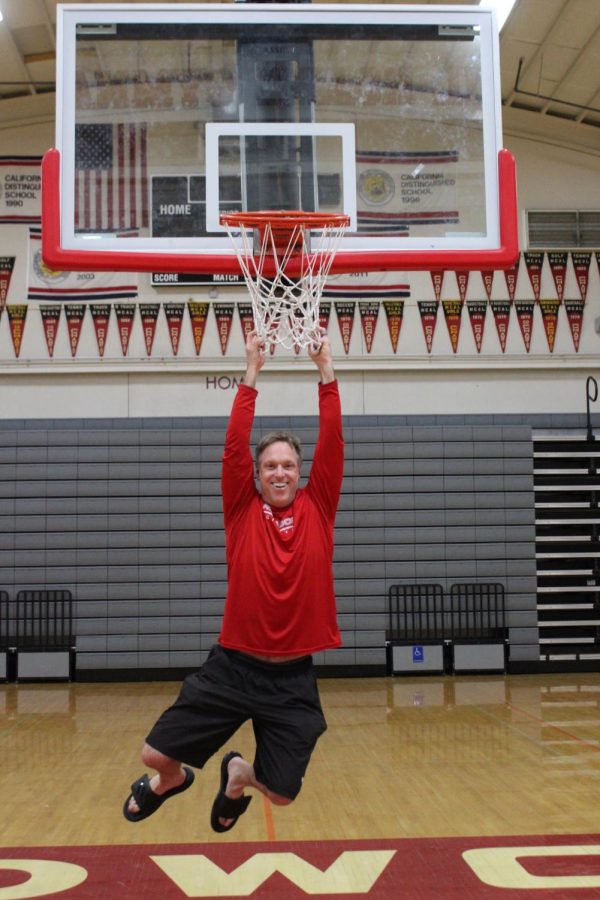 After graduating around 20 years ago, Rich Weingart returns to the Redwood gym.

“Part of the reason why you see the ‘no face painting’ and ‘no inappropriate cheering’ signs at Redwood now are because of the ‘Unknown Animals,’” said Rich Weingart, a 1987 Redwood alumnus.

Weingart belonged to a legendary group of Redwood students known as the “Unknown Animals,” who inspired both chaos and camaraderie in the Redwood gym from 1983 to 1987. According to Weingart, the “Unknown Animals” wore red face paint, occasionally went shirtless to basketball games and chanted cheers, some of which were provocative. Led by valedictorian Brian Ohleyer, the group included Rich Weingart, Dave Allen, Kevin Erikson, Jason Lewis, Matt Brown, Kim Wagner, and many others.

As freshmen, the group started out with around 10 to 15 close friends who joined together in an attempt to increase school spirit. As the audience’s attitude toward the group positively changed, it began to expand.

“I’d say [the attitude] started out with ‘What is going on?’ Then it became one of those things like, ‘Hey, that could be kind of fun.’ Then before you know it half the stands were packed with guys with their faces painted that were joining the cheers,” Weingart said.

As the excitement towards the group increased, they became progressively inclusive. Dave Allen, another member of the group, enjoyed that aspect.

“The Unknown Animals were not limited to just a group of people … the entire class of ‘87 [was involved]. If you wanted to, you were in,” Allen said.

Their black and red painted faces initially acted as a mask for the group. However, despite being called the “Unknown Animals,” it was not long before they were discovered.

The actions of the “Unknown Animals” were viewed as controversial. On one side, staff members enjoyed the increased spirit that the group brought to the school. On the other side, most of the administration was against the disobedient actions of the group.

Despite their rebellious ways, Allen believes the group used their platform to exercise their rights and diminish what they perceived to be the unjust power held by the administration.

“Probably every other Monday I was pulled into the principal’s office along with some of my other ‘Unknown Animals’. We kind of came up with a way to defend ourselves by saying, ‘Hey, we are just exercising our freedom of speech,’” Allen said.

“I thought the most effective way to sell tickets [to the reunion] was to bring people back to their high school ways, and there’s no better way to do it than to show people the ‘Unknown Animals’,” Lewis said.

As a writer for The Redwood Bark and The Twin City Times, a Larkspur-Corte Madera local newspaper, Lewis wrote numerous articles about the “Unknown Animals” and the following reactions of Redwood students throughout his high school career. Seen to be “egging them on,” Lewis and other members of the Bark faced criticism from the administration, especially the principal Kate Blickan. Lewis was constantly being told to stop writing about the “Unknown Animals,” but he countered by claiming he was only writing about the truth.

“The Bark at the time was turning this into a freedom of speech movement. There were all these discussions about ‘can teenagers say what they want to say?’ and ‘can teachers regulate what a person wears to a sporting event?’” Lewis said.

The intruding pressures did not stop Lewis from enjoying his role in the “Unknown Animals.” The sporting events became more of a comedy show than a game to him.

“There was sort of this energy between the players, the ‘Unknown Animals’ and the audience. It was sort of like this trifecta of enthusiasm,” Lewis said.

For all of these alumni, their days in high school have created a bond not only between each other, but with Redwood as well, and many of them are still in contact. The years of the “Unknown Animals” will always remain in the history of the Redwood gym and the Marin County Athletic League (MCAL).

“[Unknown Animals] is something that I think will live on in infamy,” Allen said.