Teacher Alex Franklin brings his perspective of race to Redwood 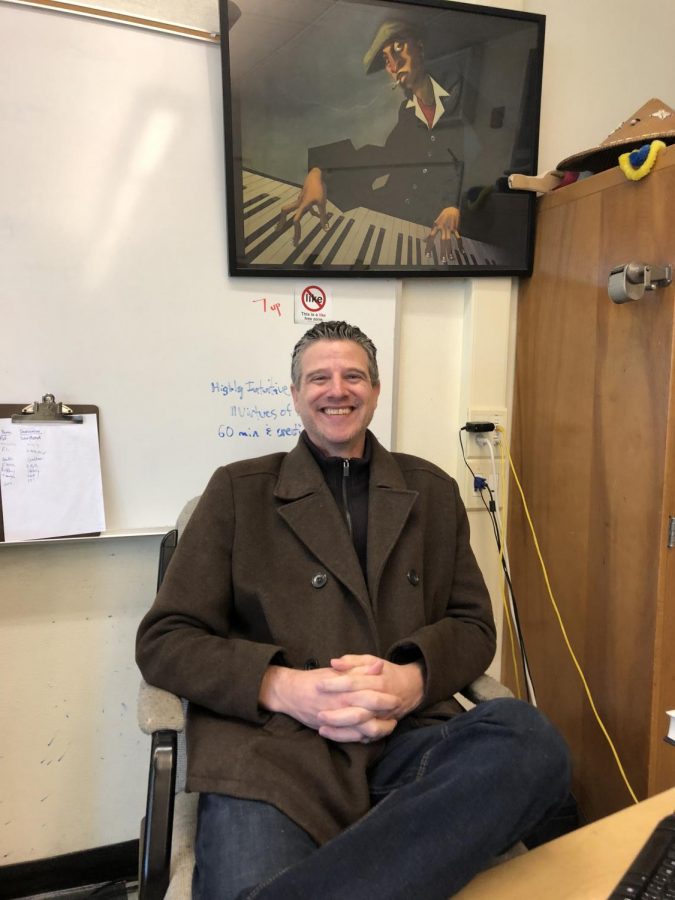 Growing up in Richmond, Calif., Alex Franklin was a fish out of water. Franklin was among the few White students to attend his elementary, middle and high schools, putting him in the minority. When Franklin first began teaching English at Redwood, he not only had to adjust his teaching style but also his personal beliefs to accommodate Redwood’s predominantly white populace. Having taught in Redwood’s English department for 15 years now, Franklin has left a meaningful impact on his students and fellow teachers, all while imparting important lessons on equality and understanding one another.

According to Franklin, these lessons were first inspired in middle school, where his race made him a target for bullying.

“I probably had about a dozen fights in junior high school. In a good portion of those, more than half, there was definitely racial elements that happened: being targeted for being White,” Franklin said.

One incident, in particular, occurred when he was 16, on one of his first dates with his current wife, Latrina, an African-American woman. Four Black men interrupted the two with a question for Latrina, “Why are you with a White boy?” The verbal harassment quickly escalated to violence. After Franklin thought the men had left, they returned with a 40-ounce glass bottle and slammed it against the back of Franklin’s head.

“The four males that struck me with a bottle [had] nothing to gain from hitting me. Their lives [didn’t] change. It’s a little moment of revenge, but [they weren’t] changing the things that made them angry, which are the racial barriers that they face,” Franklin said.

Now at Redwood, Franklin is glad to see equity training for the teachers help break down some of these racial barriers. According to Jeff Ryan, a longtime friend of Franklin and English teacher, Franklin has always placed an emphasis on enforcing racial equality.

“For people who aren’t familiar with people of color in their daily lives, they tend to—even though they try not to and they’re intelligent enough to not think this all the time—have certain preconceptions. I think [Franklin] is very good at disabusing people of those notions and dealing with people on a much more realistic level,” Ryan said.

When Franklin switched to teaching at Redwood in 2003 from his previous position at El Cerrito High School, he noticed how different the two schools were.

“I experienced some culture shock coming across the bridge. I first started teaching at El Cerrito High School and there were a couple of things that really struck me. One, the issues here are very different from the issues over there,” Franklin said. “Potential violence over there was something that students faced. Here, I’ve seen a couple of fights in my 15 years of teaching.”

At Redwood, racial diversity is limited, with a majority of students being White and Black enrollment at one percent, according to Data USA. In Franklin’s first year teaching at Redwood, the impacts of the school’s lack of diversity were put into perspective. A student brought to Franklin’s attention that other students were accusing Franklin of trying to “act Black,” which came from the inflections in his voice, tone and slang.

“It really stunned me because I didn’t realize that they thought I was trying to act Black, rather than I was just bringing with me what felt normal. So, I became more conscious of how I presented myself as a teacher here. I didn’t want that perception to leak into this idea that I’m putting up a false front and that would then interfere with my credibility and my delivery of the curriculum,” Franklin said.

Although Franklin changed the way he speaks in the classroom, he is still able to translate meaning from his experiences in Richmond, according to Ryan. Franklin has had a positive impact on Ryan’s perspective of Black culture.

“He made me understand the differences between Black and White cultures in a way that I hadn’t really before. I’d understood it in a more abstract, intellectual way because I’m just aware of the world, but he kind of made it real,” Ryan said.

Franklin’s understanding and background have made a positive impact on the lives of his students as well. Senior Helen Schwartz, a previous student of Franklin’s, created a close bond with Franklin in his class, Humanities/Short Story.

“Just hearing the stories that he would tell about some of the students he would interact with [in Richmond] really opened my eyes to how different it is. He also taught us about how he used Zen Buddhism to change how he was as a person and how he ended up becoming a lot more understanding of people and that other people’s actions aren’t a direct attack on him all the time,” Schwartz said.

Having lived in two distinct places, Franklin has a complex understanding of different cultures and the problems of many who identify with these cultures. At Redwood, Franklin tries to enlighten his students and fellow teachers on these issues.

“I think he’s probably one of the smartest people I’ve interacted with. He just has an advanced understanding of the world and how it works. I really took everything he said with a lot of meaning,” Schwartz said.