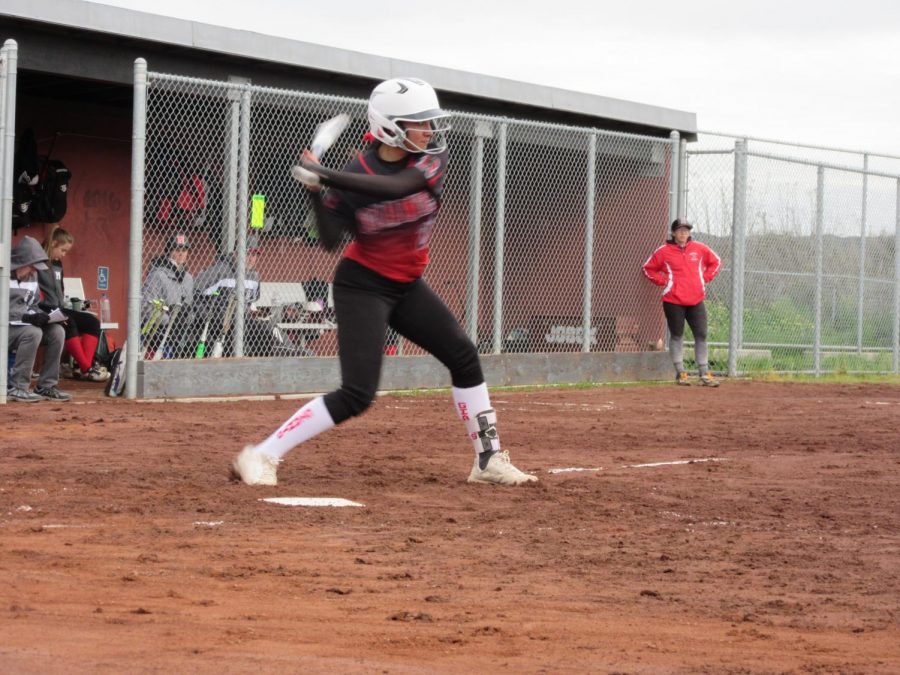 Hoping to spark a run, Kaleikini hit’s a leadoff single to open the inning.

Following a devastating 5-2 loss in the North Coast Section (NCS) championship to Livermore to end last season, the girls’ varsity softball team looks to bounce back this spring. Although they lost a strong group of seniors last season that led the team to both the NCS championship and Marin County Athletic League (MCAL) championship, the team remains confident in their athletic abilities to continue their success this year.

This year will be a lot different than past years because Redwood is without former seniors Catherine Jensen, Annie Connors and Cammie Klemme. To many opponents, the loss of a dominant senior class might make Redwood seem vulnerable but varsity coach, Emily Atkinson, thinks they will catch a lot of opponents by surprise.

This year, the team only has four seniors as opposed to the seven they had last year. Since the team is unusually young this season, Atkinson is relying on senior captains Kama Kaleikini and Alexis Gero, along with other upperclassmen to help lead the younger players.

“We have a lot of seniors and juniors that have played on the team last year with mostly seniors, so they will have to step up and show [the underclassmen] what it’s about,” Atkinson said.

Kaleikini has been on varsity since her freshman year and has experienced the strong senior captains she has had in the past. This experience has taught her that just working hard in team practice doesn’t guarantee results and she hopes to relay that message to them.

“I think that working hard outside of practice, and putting in that work is really going to help [the underclassmen] going into a game,” Kaleikini said.

With a new burst of energy from the along with the leadership of the veteran seniors, Atkinson and the whole team is confident they can make some noise this season and get back to the MCAL championship.