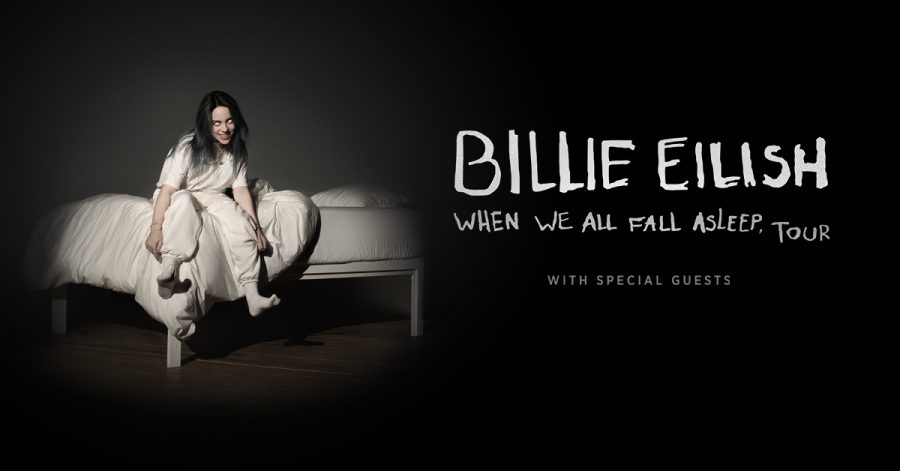 Eilish announces third tour of freshman album WHEN WE ALL FALL ASLEEP, WHERE DO WE GO?

“The whole idea of the song is it’s kind of a joke,” Billie Eilish said in an interview with PopBuzz about her new single, “wish you were gay.” “It’s kind of like ‘I’m an ass and you don’t love me.’” On March 4, Eilish released the song, a fresh, powerful sound with a problematic title.

Eilish rose to fame as a 14-year-old when she released her first piece, “ocean eyes.” The tune quickly gained popularity, accumulating over 15.4 million streams on SoundCloud. It was written by her brother and producer, Finneas O’Connell, who she began collaborating with at the age of 11, and “wish you were gay” was co-written by Eilish and O’Connell.

The hit opens with Eilish’s intense, moody vocals complemented by faint acoustic guitar. The tapping of a percussion pad starts the chorus and also marks the moment it peaks. The pairing of the guitar and percussion pad are reminiscent  of Eilish’s unique, extraterrestrial sound. She uses a compelling artistic approach, offsetting the minimal instrumentals by incorporating sounds of a studio audience, including a laugh track and applause. The praise of the studio audience fit the calm tempo as if they were reacting to a symphony.

Through the song, Eilish applies a clever approach to the lyrics. She counts down through a verse, eventually reaching one: “Baby, I don’t feel so good/Six words you never understood/I’ll never let you go/Five words you’ll never say/I laugh alone like nothing’s wrong/Four days has never felt so long/If three’s a crowd and two was us/One slipped away.”

The song features two extremes; most verses are mellow background music that could play during study hall, and they later advance into the jumpy, more powerful chorus. The energy of the chorus constructs catchy lyrics, embodying uptempo music. “I just wanna make you feel okay/But all you do is look the other way/I can’t tell you how much/I wish I didn’t wanna stay/I just kinda wish you were gay.” In the words, Eilish reflects that her heartache would be alleviated if her crush liked boys instead.

“Wish you were gay” provoked controversy immediately following the release of its title, catching the attention of the LGBTQ+ community. Many members of the community anticipated the song would provide positive representation, but were disappointed to learn that the song did not contain the message of inclusiveness and acceptance they had expected.

“First off, I want it to be so clear that it’s so not supposed to be an insult. I feel like it’s been a little misinterpreted,” Eilish stated in the behind-the-scenes video on her YouTube channel.

Eilish’s use of a debatable title is unfortunate. A more generic title might have allowed the track to stand on its own as a great piece of art, instead of evoking controversy. Eilish finds herself in hot water due to the mistitle, which could negatively affect how her upcoming projects are viewed. What’s not controversial is the song’s ear captivating edgy beat.

“Wish you were gay” succeeds in providing an authentic blend of sounds and vocals, building anticipation for Eilish’s first album, WHEN WE ALL FALL ASLEEP, WHERE DO WE GO?, which premieres on March 29. After the release of her album, Eilish plans to embark on her third tour starting April 24, and she will perform in San Francisco the following month.