The Bay Area’s hidden identity as a sex trafficking capital 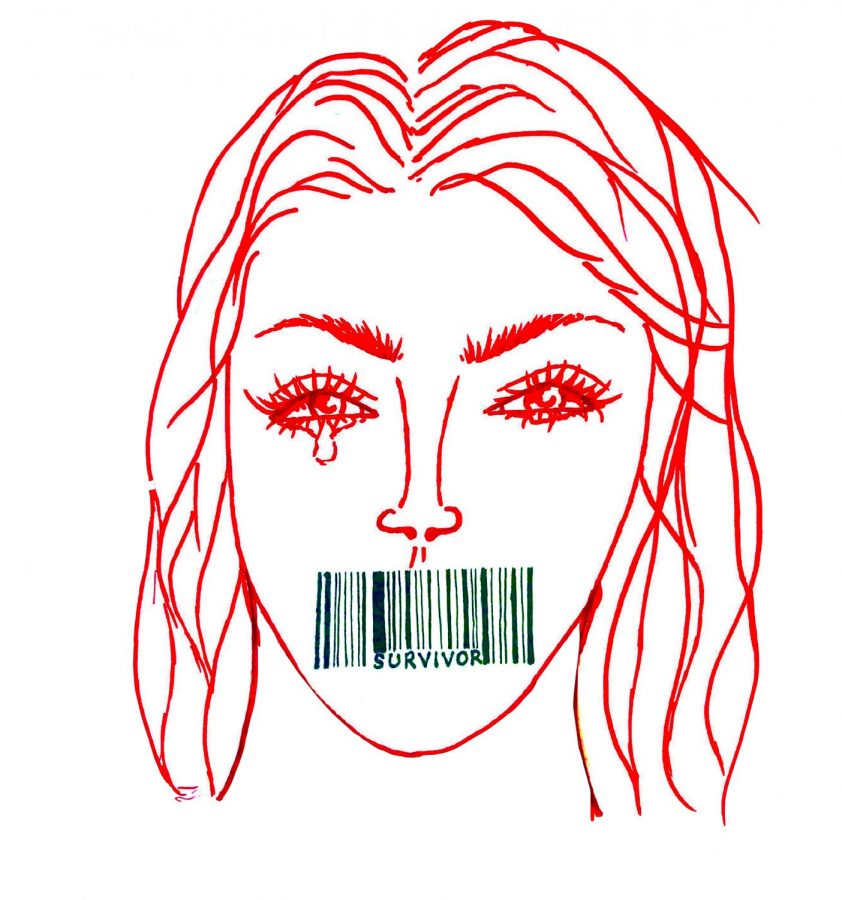 When thinking of the word “traffic” in terms of the Bay Area, the backups along the Golden Gate Bridge during rush hour may come to mind, or perhaps the congestion along Highway 101 driving towards Silicon Valley. It can be easy to forget or not even be aware of the other form of traffic that is concentrated in the Bay Area: sex trafficking.

Sex trafficking thrives in the Bay Area for multiple reasons. The diverse transportation options, including San Francisco International Airport (SFO) and other local airports such as Oakland International Airport (OAK), allow victims to be easily moved, especially those who are arriving from other countries. Brian Wo, co-founder and Chief Program Officer of the Bay Area Anti-Trafficking Coalition, believes transportation plays a large role in this issue and that the area’s varied demographic contributes to the problem once victims arrive.

“There’s just a lot of ethnic enclaves around the Bay Area. If you’re trafficking someone from another country, it’s really easy to bring them in through the transportation centers, but then also just to hide them in your ethnic area,” Wo said. “Often traffickers from other countries will traffic people from their own countries. If you’re a Filipino trafficker, you’ll bring in Filipino ladies to work at your nursing home or your nail salon.”

According to a Community Affairs Manager at victim care provider Freedom House, Ambria, who wishes for her last name to remain anonymous, there are other reasons for why the Bay Area is a sex trafficking hub. She said that San Francisco’s booming economy has resulted in gentrification that raises the cost of living, causing many people to be displaced from their homes and forced to search for ways to survive.

“It just causes a lot of vulnerability. If somebody is homeless, they’re more likely to engage in what’s called survival sex, which is a sex act in order to obtain some necessity for life such as food or shelter,” Ambria said.

The sex trafficking business is conducted in a variety of ways, but since it is often discreet, it can easily be overlooked by an outsider, according to Ambria. Trafficking can occur behind the facade of seemingly legitimate businesses, or in establishments like hotels—without the business knowing it’s happening.

According to Wo, Bay Area sex trafficking is frequently conducted out of illicit massage parlors, where the victims are usually from China or Korea. Wo also says that technology has allowed traffickers to arrange meetings at residential brothels, hotels or apartments through online advertisements. Sex trafficking can even occur on the street when there’s a pimp who benefits from a prostitute, which, according to Wo, is especially prevalent on Oakland’s International Boulevard. No matter the case, victims are being continually exploited––often  in a concealed manner.

The Perpetrators and the Survivors

The term “pimp” is one often heard in rap music, and in that cultural context it can actually be used as a somewhat respected title, according to San Francisco’s Assistant District Attorney (DA) Rani Singh. In regards to sex trafficking, however, it is the title of those who are abusing women of any age, forcing them to have sex with whoever pays the amount listed. Oftentimes, large-scale pimps will “brand” those who they control by tattooing barcodes, crowns or other symbols onto the women’s bodies, as stated by activist and New York Times columnist Nicholas Kristof. However, not everyone partakes in this act, including a more discreet yet very prevalent form of pimp called “Romeo pimps,” according to Wo.

“[A Romeo pimp is] one way that victims get recruited. For example, if there’s a vulnerable girl who looks like nobody in her life has really loved her, the trafficker comes in all lovey-dovey and pretends to be interested. [The pimp] starts buying her nice things and taking her to nice places, pretending to be the guy that cares about her,” Wo said. “But really all along he plans to turn the relationship around and start abusing her, convincing her that she needs to make money by selling herself for sex. What may seem like a good deal to her is, in reality, a trafficking situation.”

However, the pimp is not the sole perpetrator; the industry would cease to exist without the demand for it. The clients or customers, in many cases, can seem perfectly harmless, according to anonymous source and past victim of sex trafficking, “Jennifer.”

“We have this idea that people who do terrible things look like monsters, and then we think about serial killers like Ted Bundy, who remind us that not everyone looks like a monster. You can look perfectly normal,” Jennifer said.

She believes that a common misconception is that to be sex trafficked, girls have to be kidnapped. Since the victims of trafficking are often females, it can be easy to assume that women would not organize the trafficking themselves, according to Singh.

Throughout her career as Assistant DA, Singh has been involved in countless cases. She has not encountered a female pimp as of yet, however in one memorable experience she recalls prosecuting a male pimp who had trafficked numerous underage females.

“They are not humans to [the pimp]; they’re property. They might as well be dogs, cats, pets or anything else that you would need to train or break,” Singh said. “Think about a horse, right? You break them so that they can be gentle and you can ride them. It’s the same concept, except we’re talking about a human being, as horrible as that sounds. This is the mentality of people who traffic.”

According to Singh, pimps, as master manipulators, hold a deep understanding of the psychology behind who they’re trafficking. They must be able to pick up on minor signs that indicate that, for example, a girl is from a broken family or is struggling with a mental illness such as depression.

“If I’m a pimp and I see 10 girls in a room, I’m probably going to be able to spot the two that I can turn out––that I can make prostitutes––pretty quickly if I’m a good pimp,” Singh said. “I will know because it’s become an art form for me. It’s become a craft.”

The psychology behind the process doesn’t only apply to the pimp’s choice of who they are going to try to traffic, but also the emotional holds that pimps use to manipulate the victim and force them to stay.

“Traffickers are experts in psychological manipulation. For example, once [a pimp] starts exploiting a victim, it may be as simple as telling the victim, ‘I’m gonna tell your friends and family that you’re a prostitute.’ Or, ‘This is what you’re worth. This is your luck in life. You know if you talk to the police they’re just going to arrest you.’ They make the victim completely dependent on the trafficker,” Wo said. “The trafficker and the victim form what is called a ‘trauma bond.’ Even if you take the victim out of a situation, often they want to go back because that becomes what they’re comfortable with, as abusive as it is. Traffickers don’t have to lock up their victims. They can control them from a distance.”

There are numerous organizations and public services available to aid victims of sex trafficking and to raise awareness. The Bay Area Anti-Trafficking Coalition (BAATC) serves as a leader for other smaller anti-trafficking organizations while also working to educate the community. According to Wo, the BAATC began in 2011 when he and the other founders realized that the local organizations were not working cohesively to combat trafficking. Instead of providing services for survivors, they take on broader work to educate individuals and organizations on the issue.

“Essentially, we wanted to really build a unified regional response to trafficking and part of that on our end includes a lot of education and training. We’re really focused on building awareness, helping people understand what trafficking is, what the red flags are and what they can do about it,” Wo said.

A significant portion of the education initiatives that the BAATC provide is targeted towards certain demographics by training people who are more likely to come across trafficking so that they can recognize it. For example, they have worked with SFO to train airport employees to spot traffickers who may be transporting victims and have also trained property managers to look out for traffickers who might rent out their apartments.

Other organizations, such as Freedom House, take on direct work with survivors, providing care and services for up to 18 months at their care house, the Monarch. The Monarch can house up to eight women at a time, providing basics needs such as shelter, food and clothing. Once these have been established, Freedom House addresses the survivors’ other needs by providing them with therapy options, legal counseling and spiritual services if necessary. No matter how long residents stay, Ambria said that Freedom House does not break ties with the survivors.

“Once they graduate, we don’t just sever the relationship. Our survivors are always welcome to call us. We very frequently get phone calls from them even past graduation to just check in. We still want to make sure that they’re on a safe path post-Freedom House life,” Ambria said.

For those looking to join the fight against trafficking, Wo suggests the 10/10/10 action plan, which calls for actions that can be taken in 10 minutes, 10 days and 10 months. For example, in 10 minutes, punch the National Human Trafficking Hotline into a cell phone, in 10 days, conduct additional research on human trafficking and in 10 months, get involved with an organization.

“I think everybody can have some type of awareness and then if you have specific skills, like if you’re an attorney, you can do some pro bono work. I think there’s also the real general things that anybody can do because everyone has a unique sphere of influence where they can spread awareness. Learn the red flags and know how to call the hotline or the local law enforcement when you see something suspicious,” Wo said.