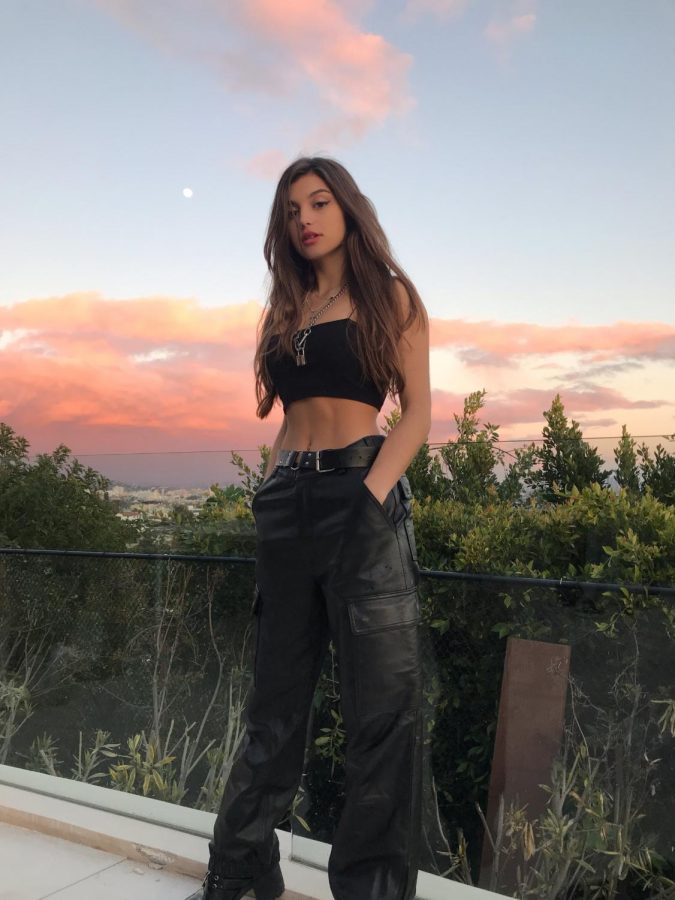 Gabriella Whited in Los Angeles posing in a photo shoot for her followers on her Instagram account.

Hundreds of thousands of people know Gabriella Whited as a popular YouTuber. She is only 17 yet has already gained over 940,000 subscribers on the platform over the course of three years by frequently posting videos, mostly about her workouts, day-to-day life, and her music. However, what people may not know is that Gabriella was a Redwood student, attending the school for her freshman year before moving to Los Angeles. During her freshman year, she posted her first video to YouTube.

“I really didn’t want to [post my first video] because I knew a lot of people would find it and I just did not want people to find it. People did find it and they made fun of me but I was iffy about continuing it…it was embarrassing but obviously, it was worth it,” Gabriella said.

Since posting that first video, “How To Get Your Needle in One Day,” which was a tutorial on how to hold your leg 180 degrees in the air, Gabriella has experienced a significant change. She moved to Los Angeles with her family during the summer before her sophomore year, not only to continue to grow her YouTube channel but also to pursue acting and music. However as Whited started to audition for various roles, she found it to be emotionally draining because of how difficult it was to be cast for roles when casting agencies already have distinct types of actors in mind for each role.

“I went on audition after audition, got so close to getting stuff and I just didn’t get it. It was like me against the other girl. ‘You’re a year younger than that age, or you have brown eyes or some dumb sh*t. It’s the littlest things, so that kind of discouraged me,” Gabriella said. “I didn’t want anyone to know that I moved here because of [acting] because I was embarrassed. So that’s when I started focusing on my YouTube because I was like, ‘let’s focus on what I have instead of what I don’t have, what I can do, how I can grow.’”

Once Gabriella fully dedicated her time to her YouTube channel, she was able to become more successful on the platform and began creating a variety of content. She decided to post more videos dealing with topics involving body-related issues because she realized that the large portion of her audience could relate to those themes, as many of them are teenage girls.

“A lot of girls struggle with body dysmorphia, body image, and I just wanted to do something to help people, so that’s how I found a passion to build a platform and posted videos that actually help people,” Gabriella said. She explained how it was the most views that she had gotten in a short period of time, as she surpassed 400,000 views in the first two weeks. “I kept consistently posting my workouts and I got really good feedback. People said it helped change their life [and] how they felt about themselves…they’re not just stupid videos, it’s actually helping someone [and] making a difference.”

However, her shift in content isn’t the only reason behind the growth of her channel. Gabriella’s best friend, Redwood senior Daisy Dalzell-Piper, credits her outgoing personality as part of the reason why viewers are drawn to her.

“I think she’s very out there and she’s not shy at all so maybe [that’s why she’s found success] and also she persevered with it for a while. She didn’t give up so that kind of helped as well,” Dalzell-Piper said.

Gabriella and Dalzell-Piper have been friends since they met in their fifth-grade class, and have kept in touch despite Gabriella’s move to Los Angeles.

By leaving her friends and the familiarity of Marin behind, she made an extremely difficult and significant leap to move to Los Angeles in pursuit of her career aspirations. Through all of this, though, Gabriella’s parents were always there to support her. Rob Whited, Gabriella’s father, saw a lot of potential in his daughter’s future and realized that in order for her to achieve her dreams, he would do whatever was needed in order to help her succeed.

While Gabriella has been able to find success on YouTube, she wants others to know that they can accomplish their dreams as well.

“If you have a passion to do something and you know that you love something but you’re scared other people are gonna judge you or put you down because you expressed yourself, don’t listen to those people. Don’t listen to anyone,” Gabriella said.