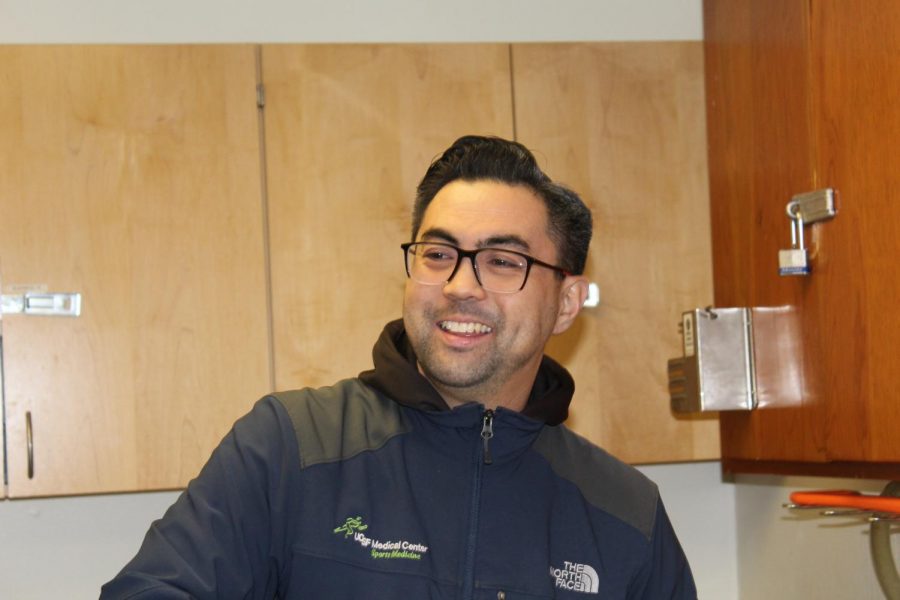 With ongoing budget adjustments being made in the Tamalpais Union High School District (TUHSD) due to the deficit, the athletic department has also undergone changes and cuts, though most won’t be visible to student athletes or have been alleviated by outside sources of funding. Community support for certain aspects, particularly the athletic trainers, was resounding at numerous open forums and board meetings. When the district announced another 10 percent budget reduction to the athletic department, the trainers’ positions were included as part of the cuts. The Redwood Foundation, a community-based fundraising organization, has stepped in to continue funding a full-time, on-campus athletic trainer after a request from TUHSD, as have the Foundations for the other district campuses of Tamalpais and Drake High Schools.

According to the Redwood Foundation’s treasurer, Katheryn Baldwin, the Foundation seeks to support the largest amount of students possible with their funding, and the athletic trainers fulfill this goal as they are imperative to overall student safety.

“To have the athletic trainers full-time on all three campuses is a phenomenal thing. There are a lot of districts in California and across the country that could not do the same thing, so I think we’re very fortunate to be able to support a program like that. Certainly it’s something our community really wants,” Baldwin said. “One way or another it would have been funded, but it would have taken a lot longer to figure out if the Foundation had said no.”

Although the athletic trainers are required by league standards to be present at boys’ football and lacrosse games in case of injury, access to them during regular practices and games for all sports is an important aspect of maintaining student safety, according to the athletic department head Jessica Peisch. At Redwood, athletic trainer Americ Alvarado provides various kinds of support for student athletes.

“From ice to severe injuries, he’s there every day to make sure the kids are safe. He’s the first line of defense,” Peisch said.

The absence of a trainer can result in student athletes missing entire seasons, according to Alvarado.

“If a parent takes a kid to a doctor and the doctor sits them out three, four weeks, that’s the whole season right there,” Alvarado said. “So having an athletic trainer makes sure these injuries aren’t lost and are taken care of so they can participate, and this affects them socially, emotionally, physically and mentally.”

Alvarado’s position, as well as the trainers for the other TUHSD campuses, were the heftiest portion of the district’s request, which also covered graduation expenses and teacher development programs. The request is for an interim, or temporary transitional period while budget adjustments are made. The Foundation will conduct a yearly vote for continuing the funding during that period, which could be up to three years. The trainers cost $185,000 yearly, making the cost for the trainer at each school $62,000, according to Baldwin.

“We’ve been really fiscally responsible the last two years so it should not be a problem,” Finnegan said. “The trainers are so important and so critical to the athletes and their wellbeing and safety that it wasn’t even a question for us; we’re happy to do it.”

Although in the past the Benchwarmer allocations were considered supplementary, according to Peisch, they have become instrumental in supporting athletics at Redwood and across the district.

“The athletic department is going to do our best to pay for all the officials, state dues and section dues. That’s all I know for sure. [The Benchwarmers] fund things from uniforms to balls to facility needs to transportation for playoffs. They do a lot; we’re very lucky to have them,” Peisch said.

Preempted by the budget crisis, the district’s request was not unexpected, according to Baldwin, though she does hope that they will regain the financial stability needed to pay for this program in the future.

“Is it common for the district to ask the Foundations to pay for something that is usually paid for by the district? Not really. It’s definitely a step that they take to ensure that critical programs can be maintained,” Baldwin said. “But it is a district responsibility so that’s why it’s only for two to three years. It does belong as a district expense, and hopefully the district becomes solvent again and can resume paying for something like the athletic trainers, which is a safety program.”

The ability to support such a program is a privilege, according to Baldwin, and various reductions to public school funding make the Foundation’s support all the more critical. Alvarado is glad for this support as it benefits the student-athlete community, but is aware that his position in the district is precarious.

“It’s in the back of my mind. Tam and Drake are also involved, so if they don’t have the [same] funding Redwood does then no one can have an athletic trainer,” Alvarado said. “That’s not fair for all the student athletes. I am happy that the Foundation and Benchwarmers are doing their part, and I’m hoping and praying that Tam and Drake can do their part too.”