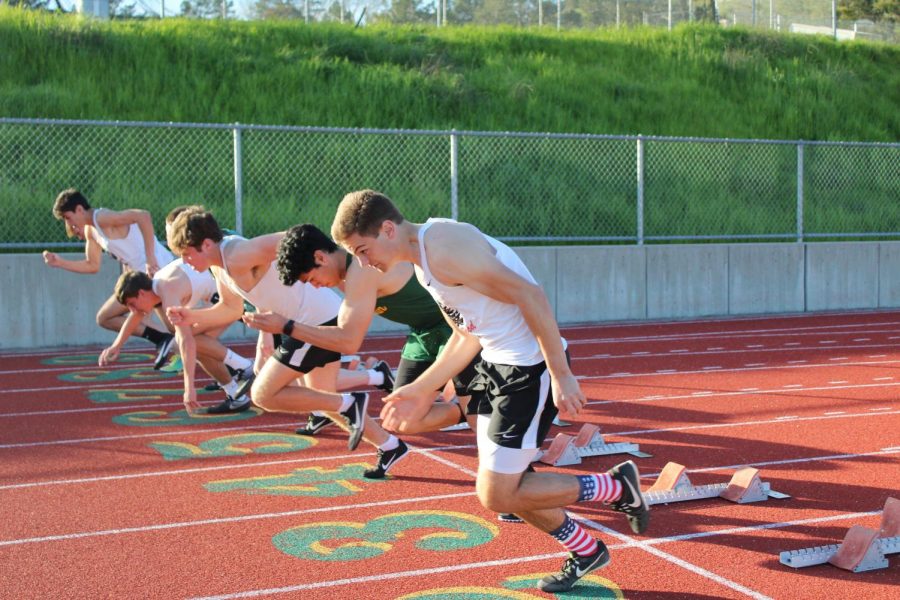 Redwood and San Marin athletes speed at the start of the 100 meter race.

On Thursday, March 14, at San Marin High School, the Redwood varsity track teams took on San Marin and San Rafael in their first meet of the season. Both the boys’ and girls’ varsity teams managed to prevail despite tough competition.

The teams started off strong with wins in the 4×100. The girls finished with a time of 51.09 seconds, a long four seconds before San Marin, and the boys with a time of 45.48 seconds. In the 1600 meter races, both senior Liam Anderson and freshman Helena Janku, who was performing in her debut, were able to finish first.

“The last race I did was [during] cross country season and now [this is] my first track meet ever with Redwood,” Janku said. “It’s really great to be out here and kick-start the track season like this.”

Redwood continued to dominate throughout the meet such as in the 400 meter races where junior Maya Holland earned a first place win with a time of one minute and 7.7 seconds, followed by fellow teammate sophomore Sofi Mincy who finished third in the race.

In the boys‘ 400 meter race, junior Charles Tantum and captain Austin Patel, a senior, finished first and third respectively. Although Tantum is accustomed to the event, Patel is typically a long distance runner and this was his first time running the 400.

“I think as long as the team is flexible in what event people want to do, we’re going to have great success,” Patel said on his changing role.

In the boys’ 800 junior Sahil Kapila led the race at a time of two minutes and eight seconds. Patel and sophomore Ari Kosorukov finished just behind Kapila allowing Redwood to take all of the top positions. Patel explained that it is extremely exciting to see younger athletes competing.

“I know a lot of freshman and new athletes have been stepping up so that’s been good to see the kids competing for their first or second time really doing well,” Patel said.

In the girls’ 800 meter, freshman Janku crossed the finish line on top with a quick two minutes and 33 seconds, followed by junior Tyler Woods and senior Neva Legallet. Despite her impressive win, Janku stressed that placement was not the most important aspect of the race.

“You don’t have to get a [personal record] time to feel good after a race, you just have to be able to stay strong the entire time and feel good and smile at the end,” Janku said.

In the field events, sophomore Sofi Mincy and junior Charlie Tantum placed second in the girls’ and boys’ long jump, while Junior Elena Sherman won the high jump with a height of 4 feet 10 inches.

As the evening came to a close, the boys’ relay team finished strong, winning the 4×400 relay by over 10 seconds and securing a Redwood victory for the dual meet.

Jake Schmitt, who is a coach for the distance runners, said that his confidence had been high going into the meet, even with some unexpected challenges.

“Our team has a great disposition this year. [There is] a lot of great leadership from our older athletes. Despite a little bit of weather adversity we’ve started the season off on a pretty positive note,” Schmitt said.

Last year the girls won MCALs, and boys placed third. This year, Schmitt’s goal is for both teams to earn first place.

“It’s been a few years since the boys have won the pennant, but I think this year it is a definite possibility,” Schmitt said. “[There is] a good contingent of boys that will score a lot of points at the meets.”

The Giants compete next against Branson at Terra Linda on March 28, and runners who qualify will participate in the Stanford Invitation Race on March 29 and 30.