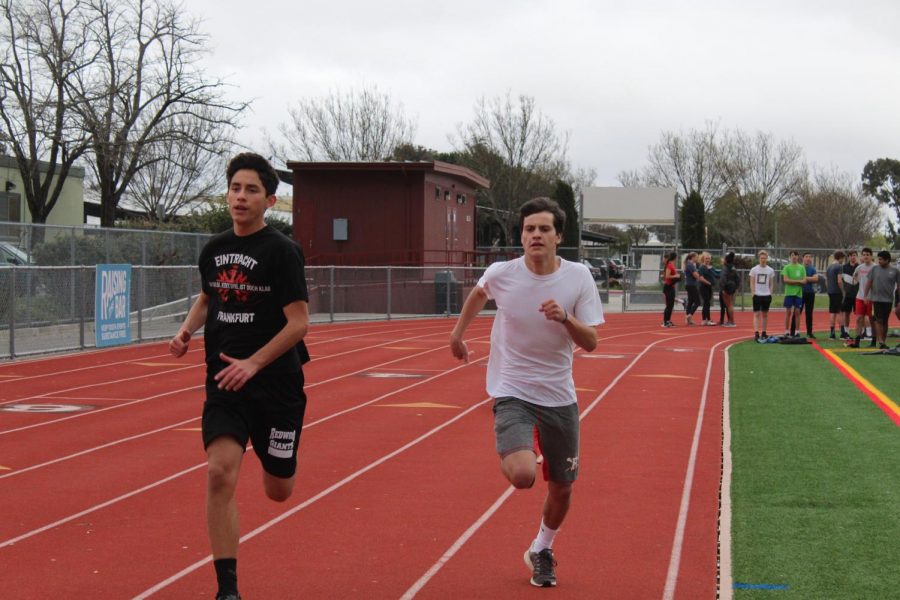 Eight runners jog in place at the starting line, getting into the perfect position for a swift start. At the signal, they bolt off on a 300 meter sprint, alternately trailing each other and pushing past their teammates in a dash to the white finish line. After placing several top 10 finalists in three events at the 2018 California State Championships, this year’s varsity track team is working hard to keep up its fast times despite setbacks from weather and smaller team sizes.

The team has significantly decreased in number since last year which will limit some of the options for events to enter in, including the four-by-one sprint team, a group that has historically achieved high scores. According to junior sprinter Ella Blazei, last year there were 10 senior girl sprinters on the team, and this year there are only two senior girl sprinters, Nicole Strub and Isabel Talke. While the smaller team size is partially due to some seniors graduating, including key sprinter Jacqueline Massey-Blake, who currently runs at Chico State, Blazei believes it may also be caused by an increase in difficulty of workout routines.

“The workouts have been harder this year and I think it’s because my coach is pushing people so that everyone will be more in shape for later in the season when it matters. There have been people that are dropping out because it’s so hard right off the bat,” Blazei said.

In addition to harder workouts, the high levels of rainfall at the beginning of the season have made it difficult for new members to integrate into the team. However, coach Nicole Graydon believes that the sprint team captains, junior Maya Holland and senior Shane Fricke, have been able to ease the process.

“[Holland and Fricke] set the tone for the team. Yesterday we were out here in the pouring rain doing bear crawls across the turf, and the captains were in front leading every exercise and staying positive the entire time,” Graydon said.

According to junior Charlie Tantum, who has been on the team for three years, leading seniors on the team and talented long distance runners have diminished the threat of competition.

“One team that’s probably our biggest competitor this year is Marin Catholic because they have a lot of guys that are fast, but of course, our long distance is better than any other school,” Tantum said.

The team went to a preliminary meet for sprinting and field events on March 2 and is competing against Terra Linda and Branson next, at Terra Linda on March 28.