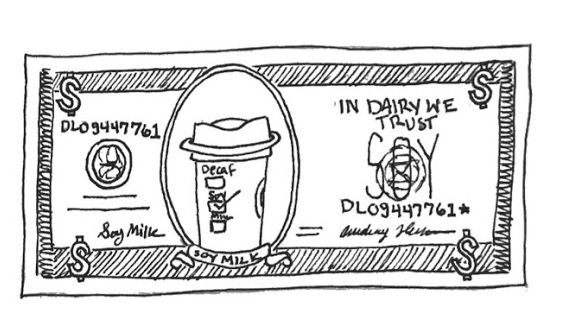 I am not an avid coffee drinker, however, I will admit I enjoy the occasional latte. A couple of times each month, I walk into Starbucks, wallet in hand, ready for the thick, creamy taste of coffee and steamed milk. I do not have to worry about my lactose intolerance, as I know large chains such as Starbucks have non-dairy options that can fit my medical needs. I order my grande decaf latte with soy milk and wait as the cashier punches in my order. Bold green letters flash across the screen in front of me, displaying my order and charge. However, instead of seeing one charge, I see two: one for the latte and an additional 60 cents for soy milk. Although I feel a twinge of disappointment each time I see that second charge appear on the screen, I have gotten used to it after several occasions, not just at Starbucks, but at many other food chains as well. And while yes, the cost of dietary substitution products are often more expensive, considering the actual price difference and use of these foods, we are being ripped off for having dietary restrictions.

I know you’re probably thinking “60 cents? What’s the big deal?” And while this is not a big deal to people like me who drink a latte once in a blue moon, some individuals may crave lattes far more often and even more people, myself included, are forced to pay a few cents extra for almost all the food they consume to accommodate dietary restrictions. When just drinking a soy milk latte every day as a morning fix of caffeine, the measly addition of 60 cents adds up to $219 a year just for the added soymilk, not even for the coffee itself.

Whether vegan, vegetarian, gluten free, dairy free or health-conscious, at least 60 percent of the adult population today closely monitors or restricts at least one dietary component, according to manufacturing.net. Therefore, it makes sense that major chain restaurants such as Chipotle, Panera, The Cheesecake Factory, Olive Garden, Starbucks and many others offer options that can fit almost anyone’s dietary needs. However, this comes at a price. Literally. More often than not, food options specifically designed with dietary restrictions in mind cost more than their “regular” counterparts. However, by examining the price differences of products, it is easy to see that we are being significantly overcharged for some dietary replacement products.

Although products used as dietary restriction-friendly substitutions for more common foods usually do cost more than the original, the system of pricing for these swaps is flawed. Again, soy milk lattes are a prime example of this. According to the prices of various products sold at Walmart, pasteurized two percent milk costs approximately 30 percent less than vanilla soy milk, as used by Starbucks. Specifically, one ounce of two percent milk costs 3.414 cents and one ounce of vanilla soy milk is 4.953 cents. In a 10-ounce Starbucks grande drink, 2 percent would cost 34 cents and vanilla soy milk would cost 50 cents, totaling to a difference of 16 cents. Considering that two percent comes “free” with a drink (meaning there is no additional charge), drinks made with soy milk should have an additional price of 16 cents, yet somehow 44 cents are added to make soy milk cost 60 cents extra. 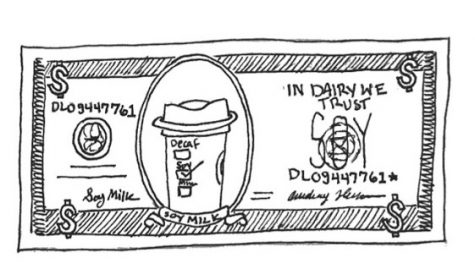 Regardless of the price difference of products, the distribution of additional charges are also illogical. Starbucks adds 60 cents to any drink with soymilk, regardless of size. However, the price of a substance directly relates to the quantity, meaning the additional cost should vary depending on the size and the amount of milk included in a drink. Similarly, several restaurants, such as Dominos Pizza, have an additional fee to replace pizza crust with a gluten-free alternative,  regardless of if the pizza is a single serving or could feed an entire family.

Some chains may even be charging extra for food replacement products in order to fund other programs or components of their business. Prior to 2012, Starbucks Rewards Gold Cardholders were able to purchase soy beverages with no additional cost, however, when Starbucks looked to update its reward program, it turned to the additional cents people will pay for non-dairy milk in order to make some extra cash to fund the operations, according to godairyfree.org. Not only did this create a slew of angry dietarily restricted customers, but also made it appear as if the franchise was using the money derived from the extra charge for soymilk to fund their new, yet obviously more expensive, rewards program. This leads me to question if using extra money made from the consumption of food substitution products to fund other aspects of a chain or simply boost revenue is a common phenomenon, and our dietary restrictions are being taken advantage of. Unless specific reports coming from the perspective of an insider in the food chain industry are released detailing this occurrence, there is no way of knowing for sure.

Of course, there are other aspects to consider when analyzing price differences such as different transportation expenses, sourcing difficulties and several other factors invisible to the consumer. It is also important to keep in mind that a large number of food chains do not charge extra for products commonly consumed to fit dietary restrictions, and for that, I am extremely thankful. However, in a world increasingly populized by individuals who cannot eat certain foods, either for medical, ideological or health reasons, it is the responsibility of food providers to meet the needs of all consumers, without an additional cost.