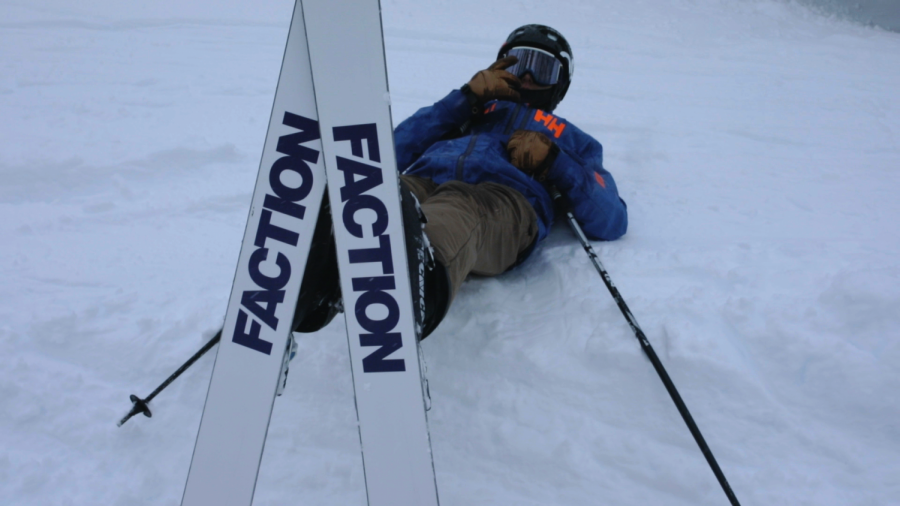 Luke rests on a snowbank after a run

“When we decided to have a family, we were so excited to raise skiers. We actually planned our family around ski season. We knew that we had to conceive between August and December in order to not miss a ski season. So Todd and I are very dedicated parents and skiers,” said Sumi Kaga, the mother of competitive big mountain skier and junior Luke Mclay.

At the age of three, Luke was already on skis. Two years later he joined Kirkwood’s Junior Expedition team and has been skiing with the program for 11 years. His very first season pass at Kirkwood mountain was free, as he was only three years old. By the time his first ski season was over, he had 40 days on the mountain. According to Mclay, he has been able to go up to Tahoe every single weekend of the season since he started, and is extremely dedicated to his craft. Todd Mclay, Luke’s father, is one of the primary instigators of that passion.

“I would do whatever it took to make him happy in the snow. I knew at that point, if he could go out in a snowstorm and not cry and complain, then I had him hooked. That’s what we wanted. We wanted both of our boys to be hooked on skiing because that’s what we do,” Todd said. “I was really proud as a dad when Luke took to skiing like that. We’d say things like you’re five, so you’ve gotta do at least five runs before you get hot cocoa. I’d lay in the snow and let him throw snowballs at me, jump on me, whatever it took just to have fun in snow. Then I knew he would be a skier.”

Big mountain skiing comes with risks. Luke jumps off of 40-foot cliffs and does tricks such as double back flips. According to Luke he does not take skiing lightly, and he isn’t thinking about much other than safety when doing stunts.

Luke has endured multiple injuries of ranging severity. In fact, while filming with the Bark, he cut his lip open after hitting a flat landing, requiring 5 stitches.

“Back in eighth grade when I first learned backflips, I did one and didn’t go far enough on the jump, so my [ski] tips dug and I face planted. I was knocked out for half a minute and my face ripped open,” Luke said. “A few years prior to that, I ruptured my MCL [medial collateral ligament] in my knee. Those were both quite painful. I just did all the physical therapy and everything I needed to do to get healthy and get back on my skis again.”

Watching Luke transition from downhill skiing to big mountain skiing has been monumental, according to Luke’s parents. Todd watched Luke do his first backflip, and cherishes the pride he felt for his son in that moment.

“He just looked at me, skied next to me and said, ‘Dad I’m gonna do a backflip.’ He’s going to do it whether I’m there or not. And then he just proceeded to do a backflip. He did three or four of them, and then that same day I was back at our house and he wound up in the Kirkwood clinic because he crashed on his face after his fourth backflip,” Todd said.

Kaga supports Luke, despite his many injuries. She knows that he’s a talented skier, and that’s what keeps her going even after some of his more major accidents.

“It’s tough. He has scars on his face and he’s had to recover from different injuries as a result of skiing and falling. What gets me through is when it’s good, it’s so good. It’s so amazing to watch him ski and to see how confident and competent he is. He has a gift and I’m just super, super proud of him,” Kaga said.

Despite his history of injuries, Luke’s unconditional love for skiing trumps the trauma. He skis with his team almost every Saturday and Sunday from when the mountain opens at 9 a.m., until it closes at 4 p.m.

“You just get an escape from everything that’s happening in day to day life. You get to go out there, jump off dope stuff and get mad adrenaline rushes,” Luke said.

The daily life of a big mountain skier is not all backflips, cliffs and tricks. It entails culture too. For example, Luke and his teammates use slang on the mountain to describe skiing and clothing style.

“Steez is one that we use. It’s a style thing. Like a certain style is considered steezy. It can be the way that you dress on the mountain or the way you do tricks. There’s a whole spectrum of steez,” Luke said. “Shralp. That’s a fun one. Shralpin’ is kind of like a different style of skiing. You’re not just skiing, you’re jumping off things that… F***k, what is shralping? You can’t really define shralp, you just do it.”

Sometimes it can be hard to transition away from the hardcore of regimine of training after the snow melts, according to Luke. When ski season comes to an end in late April, he plays a specific videogame on his phone, Shredsauce, to curb his hunger for skiing.

As he gets older, Luke hopes to continue skiing and eventually teach his own children how to ski even earlier than he did.

“I’m getting [my future kids] on skis at two years old. Not three. Two,” Luke said.