Who calls the shots at a basketball game: the impact of heckling on players 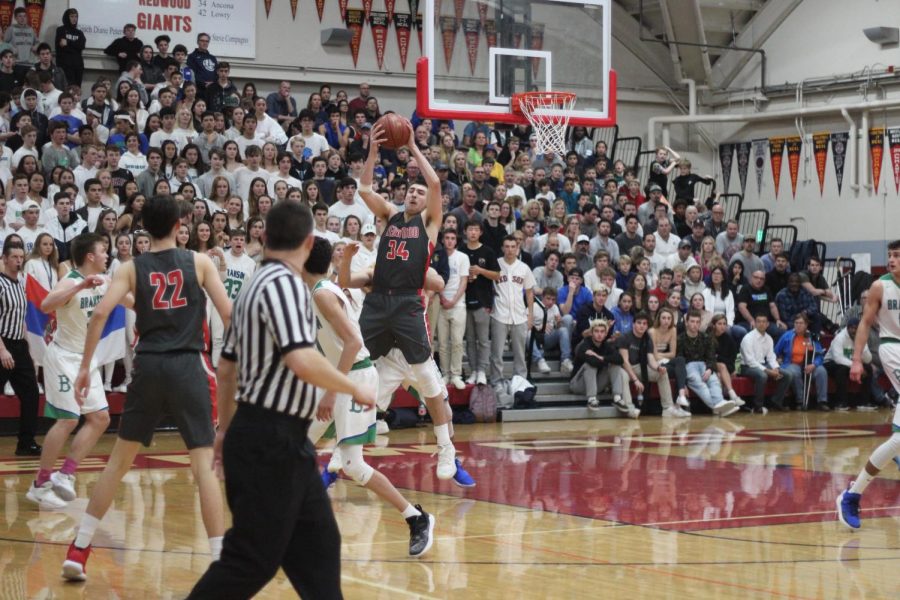 The electric pulse of excitement rippled through the crowd for Redwood’s Marin County Athletic League (MCAL) championship basketball game on Feb. 8 against a league powerhouse, Branson. Redwood’s Phil Roark gymnasium can fit a maximum capacity of 2,152 people in the bleachers, yet the gym surpassed this amount that evening with people overflowing onto the court. At other times, such as boys’ varsity basketball NCS (North Coast Section) and state playoff games, the audience consists of approximately 100 people, with occasional cheers from parents or siblings.

An audience plays a large role during a basketball game, determining the energy of the gym and players, according to senior Jenny Walker. Some players use the audience as fuel, however, Walker occasionally gets fed up with the invasive crowd. Being on varsity basketball for all four years of high school and committed to New York University, Walker has been the subject of jeers and many other disturbances.

“I have been attacked. [Audience members] have said, ‘No. 30 you look like a man,’ ‘You’re overrated,’ ‘NYU doesn’t want you.’ They’ll actually look up your name on MaxPreps and get your stats,” Walker said. “They’ve said some of the things on Instagram that you hear at games. I saw on someone’s post, No. 30 is a man.’ That was really mean. And you can’t say anything back or they win.”

Walker has experienced many forms of harassment inside and outside the gym. According to Walker, Marin Catholic students are the worst audience to play for.

“At MC, if the ball gets knocked out into the bleachers and you have to get it, there will be 100 [rowdy fans] behind you screaming at you,” Walker said.

Students are not the only participators in an aggressive audience. According to Walker, parents can be just as disrespectful as well. They not only yell at the players, but they yell at referees until they get a warning.

“[Parents] will yell at you and it does not matter if you are a high school girl. Big picture, why are you yelling at a teenager? This is a high school basketball game. They don’t really understand the basketball game, so they’ll say things that are just uninformed,” Walker said.

According to Walker, it’s much worse for boys’ teams. She explained how the crowd has “no mercy” and will go after a player’s personal life, which is especially hard when their parents are in the stands.

“One kid on MC had his sex life brought up by the crowd. They were yelling it. That’s so wrong. It’s just frustrating for me when I’m trying to play a game and the audience is saying hurtful things,” Walker said.

Senior Jack Gerson, who has been on the boys’ varsity basketball team for two years, has endured many personal attacks during games.

“When I’m at the freethrow line, fans will chant, ‘25 smells like s**t.’ That happened this year at Tam. Novato kids are ruthless. They’ll say things like ‘twig,’ ‘lanky boy.’ MC kids heckle for sure, but I’m friends with them, so they aren’t personal insults,” Gerson said.

Although verbal abuse from the opposing audience is common, Redwood does not tolerate its own crowd to do so.

“The [opposing] audience doesn’t have to participate in sportsmanship, but at Redwood they do. The admin at Redwood who guard the student section, they don’t let our fans heckle, and there are no signs allowed. Redwood has stricter rules than most, if not all other schools,” Gerson said. “For example, the things you hear at Drake or Novato or Tam, if a Redwood kid were to say something rude like them, they’d get kicked out of the gym.”

Many Redwood students feel that the verbal restriction of our audience is unfair. According to Gerson, Redwood seems to be the only public high school in Marin County’s athletic league that has banned its crowd’s expression.

About a month ago, during a boys’ varsity basketball matchup against Drake, senior Evan Solter, who is friendly with many of the Redwood players, was kicked out of the gym.

“The whole entire team is basically made up of all my best friends, so I feel like [the game] is personal sometimes. A kid on the other team threw an elbow at one of my friends and then threw down another one at my other friend. I got up and yelled and dropped an f-bomb. Ms. White wasn’t really having that, and kicked me out [of the gym], which I thought was unfair because it was my first warning. I think it’s interesting that one little word can do that,” Solter said.

Gerson not only views this limitation as oppression, but as a disadvantage for the team.

“We don’t get as big of an advantage as other schools because Redwood fans can’t heckle. I’ve seen teammates get called fat, and they’re not even fat. They’re just ruthless insults and no one stops [the other team’s audience] from saying them, which is fine; I don’t mind it. I just think it’s unfortunate that students here at Redwood don’t have the privilege to be as energetic as other schools,” Gerson said.

Solter believes that sports come with the typical rude comments from the crowd, which toughen players and continue the legacy of traditional sport culture.

“I understand where [Redwood administration] is coming from, but I also think that the whole point about sports is that players should be resilient in their mind, and know that you can’t let things affect you,” Solter said. “In sports, the whole point is that you’re competing and that you have to face adversity, and that’s a good learning lesson. They shouldn’t teach kids to not be able to put up with people being mean to them.”

Although Solter believes that heckling can be a good thing, the audience can ultimately make the decision to respect each player. Walker wishes that the audience would simply encourage their preferred team without attacking individual players.

“I would include the audience in sportsmanship. People need to recognize that you’re at a basketball game. Have fun, cheer for your team, stop yelling at people who are there to entertain you. It’s just wrong. If you’re going to a basketball game, just try to stay positive for your team and let the players play,” Walker said.