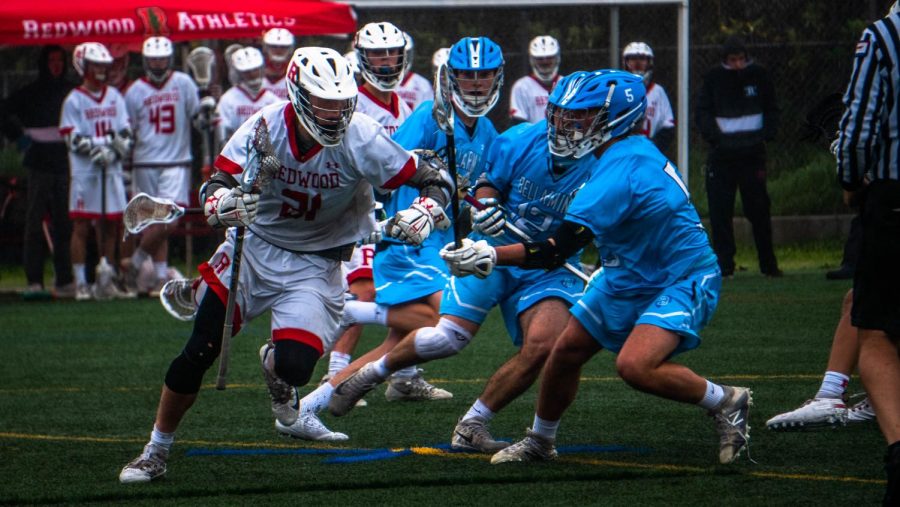 As a light rain began to fall, the Redwood boys’ varsity lacrosse team took the field against Bellarmine College Preparatory on Saturday, Mar. 2. The Giants came into the game armed with momentum from a 6-3 victory against the Jesuit Marauders on Feb. 27. That momentum fell flat, however, with a 10-6 loss against the Bellarmine Bells, a surprise considering their 9-4 victory against Bellarmine in the 2017-18 season.

According to senior Harri Hetrick, a captain and starting midfielder, the Giants came out  without an intense desire to win.

“This year they came out and they had a chip on their shoulder and they wanted to compete, and we didn’t come out with the willingness to compete so they brought it to us in the beginning. We couldn’t match their intensity,” Hetrick said.

The pace of the first quarter was set by the Bells with a strong one-goal per possession start to the matchup, for a total of four straight goals. Redwood was unable to assemble a strong offense to counter Bellarmine as they had limited shots on goal in the first quarter.

The Giants finished out the first quarter with a strong push downfield and an unsuccessful shot on goal by Hetrick.

“As the game went on we began to get a little bit of momentum, bursts of momentum, but I think that our unit as a whole was uncomfortable with the defense they were running and we couldn’t figure out how to penetrate,” Hetrick said.

Stockton attributed the slight shift in favor of Redwood to a developing understanding of how to counter the offensive plays of Bellarmine.

However, the Bells scored with four minutes remaining in the second quarter to make the score 5-2.

According to Stockton, Bellarmine had a strong x-attackman, a player who plays from behind the goal, and this was unfamiliar for Redwood.

“Some shots I really want back are [from] No. 10; he came from behind the goal and he would just sneak it by me,” Stockton said.

The Giants were also coming into this game on a two-game win streak, which led to some overconfidence, according to both Hetrick and Thoma.

“I think we just got cocky and we really didn’t play the good fundamental lacrosse that we usually play as Redwood,” Thoma said.

According to Hetrick, part of the loss was not coming out with anything to prove.

“After the game I talked to the guys and I said that in practice you need to be willing to look the guy next you in the eyes and say ‘I want to take your spot,’” Hetrick said.

The Giants take on Palo Alto at an away game on Wednesday, Mar. 6.