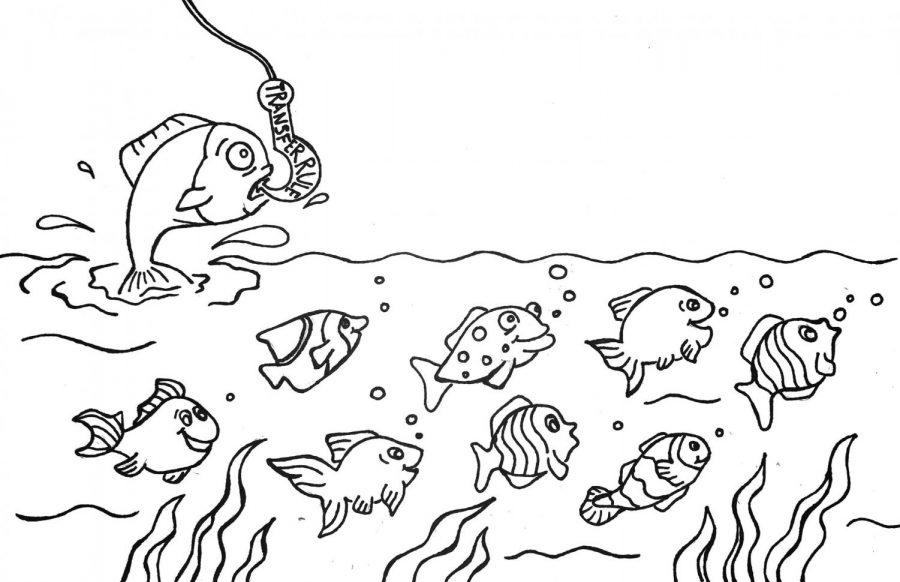 It is a warm spring afternoon at Redwood High School, where the Giants are hosting a track and field meet, as junior Elaina Sherman watches on. To the average passerby, it would seem as if she was there to cheer on her friends or maybe a sibling. However, even though Sherman has been practicing with the team all season, she has been sidelined due to the North Coast Section transfer athlete rule. Sherman, who transferred from Marin Academy following the first semester of her sophomore year, is in the same boat as many athletes who transfer to Redwood and are looking to play varsity sports.

When an athlete transfers to another school within the North Coast Section, they fall into one of three groups: residential transfer, hardship transfer or sit-out period transfer. Residential transfers are students who move out of one residence and into another with everyone from the previous residence. Hardship transfers are students who were forced to switch schools due to different hardships like having parents in the military or getting evicted from a residence. Students who do not fit into one of these categories must serve the sit-out period.  As of this year, an athlete who is required to have a sit-out period isn’t allowed to compete in varsity athletic competitions for 51 percent of the team’s season, added on to the minimum of 20 business days that it takes to review that athlete’s eligibility form.

Completely doing away with the harsh sit-out period of half the season wouldn’t be beneficial to players or coaches, giving athletes too much freedom. However, reducing the sit-out period is necessary to keep athletes engaged with the sport and their new team.

There are many factors that come into play when making a rule, like the NCS transfer one, because of the amount of athletes it affects. Athletes switching schools to play different sports in the same year and athletes transferring after getting cut from a team are all possible scenarios that have to be taken into consideration. Athletic Director Jessica Peisch, however, says that the rule was created for one specific reason.

“The reason for transfer rules is to stop having powerhouse schools where all of a sudden, you have all 15 players from your club team that don’t even live in the same county,” Peisch said.

Although there was a slight reduction in the sit-out period this year, further reduction down to at least 20 percent would still sideline the athlete for early, pivotal games, but allow them to play close to a full season.

In order for Sherman and all transfer athletes to play with a team, they have to go through the Athletic Director first to be deemed eligible. The director’s role in the process is to sit down with every student that wants to play a sport and go over their situation to place them into one of the three groups (residential, hardship or sit-out period). Ultimately, the Athletic Director is the one who has to figure out whether the athlete is immediately eligible or has to serve a sit-out period.

For Sherman, sitting out meets from the end of last January to late last April didn’t affect her as much as it affected the team. Being the best female high jumper on the squad, the points that Sherman racked up after her return gave the team a huge boost that they missed in her absence. Letting her team down lead Sherman to be opposed to the transfer rule.

“For me, I didn’t agree [with my sit-out period]. Obviously I’m not transferring from MA to Redwood because I want to be on a better track team,” Sherman said.

One of those athletes who was immediately eligible was junior Chenna Mandieta who transferred from San Rafael High School the summer before her sophomore year. After going over her details with Peisch, she was deemed eligible for the entire season and made the varsity basketball team where she made significant contributions, averaging 3.8 points and 1.1 assists per game.

“I didn’t start, but contributed by scoring points, on the defensive end and just being a support system for my teammates,” Mandieta said.

Mandieta’s situation and many others’ prove that playing a full season allows an athlete to get comfortable with the team earlier, making for greater contributions. Practicing with the team for half the season and not playing in games forces transfer athletes to make quicker adjustments to the game than those who have been playing since the beginning.

“I really just got a late start. I’m still getting accustomed to the games and fighting for more minutes when all of my teammates did that at the start of the season,” Minty said.

Both Sherman and Minty claimed that when transferring schools, athletics weren’t their top priority, yet they are still being treated as if they transferred solely for athletics.

Sherman wishes that the school would judge athletes on a case-by-case basis and evaluate every student based on factors outside of athletics. However, according to  Peisch, this is where you start to run into problems.

Although Peisch has a point, she claims that she is always able to get to the bottom of it.

“Some kids might not be as truthful to me, but the truth always comes out,” Peisch said.

Regardless of the reason, sitting out half of a season is excessive no matter who you ask.  According to a recent self-conducted Bark survey, 78 percent of Redwood students disagree with the current NCS transfer rule, proving that reductions must be made. Not only is the rule heavily unpopular, but the effects run deeper than the sit-out period. The team loses valuable talent for a majority of the season, and once athletes are eligible, it is difficult for them to get a grip on the game-like scenarios that can’t be mimicked in practice. For these reasons, and many more, it is clear that the NCS transfer rule sit-out period should be reduced to 20 percent of the season, and possibly less. This rule doesn’t just take away half of a season, but half of an experience that cannot be replaced.