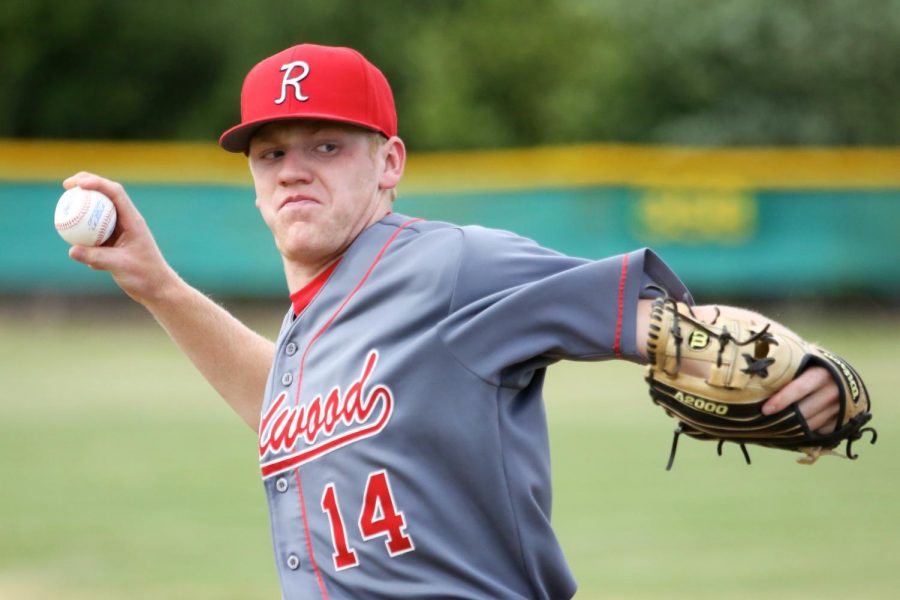 Senior varsity baseball pitcher Robbie Wilson has been playing baseball since he was in kindergarten. It wasn’t until the summer of 2018 when Wilson’s career took a turn for the worse: he found out he had broken his L3-vertebrae playing baseball last year.

“This pain kept on getting worse and worse; I didn’t know what was happening to me. But most importantly, I wasn’t sure if I was going to be able to play again,” Wilson said.

At Redwood, Wilson has played for the baseball team for all four years, playing his junior and upcoming senior year on varsity. According to varsity coach Mike Firenzi, Wilson’s pitching attributions were an integral part of the team’s Marin County Athletic League (MCAL) championship last year. However, after his injury, Wilson didn’t know if he was going to recover in time to successfully follow up this accomplishment in his last season.

Despite his role giving him physical trouble during the past season, Wilson’s passion for his position was sparked at a young age. His interest in pitching started as soon as he stepped foot on a small field in Little League Baseball in third grade.

“I was always kind of a bigger kid. I threw harder than everyone, so the coach decided to put me on the pitcher’s mound and I began to do my thing. I enjoy it so much because I like to be able to control the game. I like being able to have the game in my hands,” Wilson said.

However, as Wilson’s back pain progressed, that control was taken away from him. Prior to the start of the season, he played summer ball on a club team where he pitched for the entire season. The heavy workload led to the beginning of his agitated back pain, but Wilson didn’t think much of it.

However in April, Robbie woke up unable to move or feel his legs, forcing him to take two weeks off of the season.

“Some weird freaky thing happened with my sweat glands or something the doctors couldn’t really figure out. The doctors said it wasn’t connected to my back injury; it was some sort of infection the doctors didn’t know anything about so they just forced me to walk on it to get the pain to go away,” Wilson said.

Although Wilson was only out for two weeks due to his leg paralysis, he was still suffering a serious back injury. After Wilson recovered from his paralysis, his back pain began to intensify. Instead of taking a break, Wilson decided to ignore his irritation until May when he recalled his back hurting so badly while pitching a game that he had to pull himself off the mound.

“I finally decided to go get [my back] checked out. I got an X-ray and the doctors didn’t see anything wrong. But afterwards my back was still hurting, so I went back to the doctor to get an MRI and it turned out I broke my L-3 vertebrae,” Wilson said.

According to Wilson, the MRI showed that his back had been broken for three to six months prior. His doctors came to the conclusion that his injury slowly built up over time since it was a repeated stress injury resulting from the twisting motion of pitching.

Following his diagnosis, Wilson had to wear a plastic brace around his body for three months and attend physical therapy three times a week for two months, during which he was finally able to recover. Throughout, Wilson remained optimistic despite missing out on college recruitment season.

“Luckily, I talked with some people who have experienced a back break as well. I randomly ran into a senior basketball player, Omar [Elliot-Diab], and he told me that he was back on the court within six months, so I tried to think positively that I was going to successfully recover,” Wilson said. “So eventually I wasn’t too worried about it as much as I worried about college recruitment which I missed out on. But after a couple of months, I realized I had to move on.”

According to Firenzi, although there are ten other pitchers on the team, he is hoping to get Wilson ready in May for a potential position in MCAL games. Firenzi stated that Wilson is a unique player in his ability to work his hardest in any situation and maintain strong stamina.

“Robbie has a powerful ability to thrive in pressure situations. We stuck him in there and into some rough spots last year and it didn’t seem to bother him too much. I think [these are some] of his biggest attributes: his ability to pitch and play in high-pressure situations and stay positive,” Firenzi said.

Firenzi sympathized with Wilson, since he is aware how short his high school career is. As the 2019 season begins in February, Firenzi has a plan to eventually get Wilson back in the game as smoothly as possible.

“We aren’t going to try to rush him back in. They are high school athletes, and I’m of the belief that I don’t want someone doing permanent damage to themselves to just win a high school baseball game. So we are on the cautious side when it comes to injuries, especially [with] someone as viable as Robbie,” Firenzi said.

Baseball has been a very meaningful sport for Wilson, as he loves the team aspect of the game. According to Wilson, all of his teammates have become his longtime friends and he is excited to end his last season with those he has been playing with for so long. Wilson stated that his recovery brought him strength and happiness, knowing that he will return to the field.

“It’s been a kind of positive process in a way that I felt myself making progress, getting more flexible and a little stronger each time, which is nice. I enjoy seeing my teammates at school alongside the baseball field; I love the team aspect of it a lot,” Wilson said.

Along with staying open-minded about his injury, Wilson has also had the support and positivity of his friends to help him throughout his journey. Senior Genki LeClair, friend and teammate of six years, believes that having the opportunity to play alongside Wilson gave him insight on just how much Wilson has achieved over the years.

“It was really hard seeing Robbie go through his injury and struggle through it since he didn’t know what it was for so long and had no solution. But after his recovery, I am really happy for him because he was down for a while and gets to return and play his last season. Now he seems a lot less stressed about it and as a team, we’re ready for a great season with Robbie,” LeClair said.