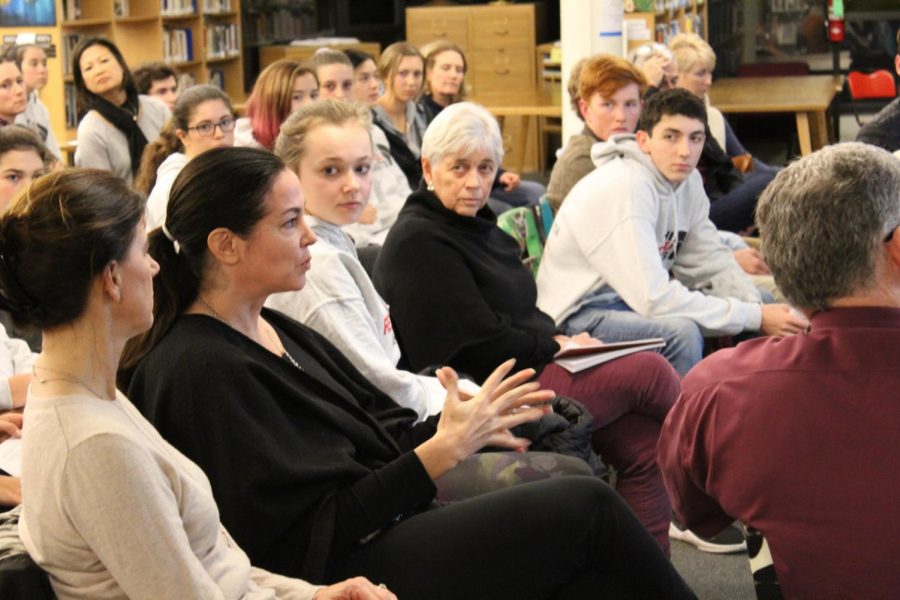 Proposing to cut or limit several programs in the TUHSD, district has received backlash from the Redwood community as it has spoken against many of the proposed budgets.

Despite parcel tax Measure J passing in the midterm elections on Nov. 6, the Tamalpais Union High School District (TUHSD) announced that they will have to cut an additional $3 million for the upcoming school year.

The initial draft of the budget cuts, formed by the Fiscal Advisory Committee, would save the district a projected $2.9 million. The draft includes several reductions such as decreased spending on technology, certified staffing, maintenance, athletics and therapists. The proposal also listed several eliminations to the budget, namely cutting certified librarians, evening community classes, athletic trainers and limiting student schedules to seven-period days.

While these cuts will affect many students in the district, Superintendent Dr. Tara Taupier believes that the Fiscal Advisory Committee is fully considering the many impacts these cuts could have. The district also sent a survey to students, staff and parents in September to gather information regarding which areas would be least hurtful to cut.

“There was a lot of thought, and we have a whole committee that looks at myriads of things and took in the feedback from the survey. I think they were trying to take in a broader picture and focused on student learning,” Taupier said.

Since the budget reductions will ultimately affect the entire district community, Corbett Elsen, the TUHSD Chief Financial Officer, said that the district is trying to have as much community influence as possible in their decisions regarding the budget, a goal both him and Taupier have been trying to accomplish since starting their positions last August.

“My main goal is to communicate the complicated financial situation to our community and staff so they at least have an awareness. When I first came in, there was no awareness, and you can’t solve a problem unless you identify it,” Elsen said. “We have to show the community we are active. Then how do we go about getting student input, staff input community input and parent input? We have the Fiscal Advisory Committee of 14 individuals and over a 1,000 responses on the LCAP (Local Control and Accountability Plan) survey that helped inform us where the community is at.”

After announcing the upcoming budget reductions, the district hosted community forums at Redwood High School, Tamalpais High School and Drake High School for feedback. However, there has still been significant pushback from the community regarding some of the proposed cuts and reductions.

Specifically, many community members and students expressed their concerns regarding the 50 percent reduction of the Bay Area Community Resource (BACR) services offered on campus. Junior Quinn Robbins, who attended Novato High School prior to this school year, emphasized the importance of having a high-functioning mental health support staff at the convenience of all students.

“I’m sure [Novato] had some training, but I never felt like I was getting the right support. They could only do so much, but the difference between that and seeing a therapist here once was that here they were so much more helpful because they are actually qualified to do these things,” Robbins said.

According to Robbins, the BACR counselors are essential to Redwood students because of their role in helping students cope with any difficulties they are experiencing.

“We didn’t have those wellness resources [at Novato] … I feel like if we’re taking away more things, there’s more opportunity for tragedy. They shouldn’t take any risk in possibly having something [bad] happen [if cuts are made to the wellness program],” Robbins said.

Furthermore, Redwood’s UCSF athletic trainer, Americ Alvarado, has taken action by outlining the drawbacks of eliminating all three trainers across the district in an email sent out to the parents of many Redwood athletes. In the email, Alvarado provided a link to a feedback form in order to generate input and support from the community. The feedback form closed on Monday, Jan. 28 and will then be forwarded to the Fiscal Advisory Committee.

“I think it’s unfair because there’s no plan moving ahead to at least have an athletic trainer. The plan for the district is to just cut it in general. If they were to say, ‘Hey, we understand the need for athletic trainers but we only afford two days a week,’ that would be better. But that’s not the case, and I feel like it’d be better presented if there was something we could work with,” Alvarado said.

According to Alvarado, having an athletic trainer on campus is especially vital to Redwood.

“I feel like it’s a necessity for student athletes to have some sort medical support. Forty percent of the student population plays some type of athletic event, so without having any support, these kids don’t feel like they can achieve or succeed in an afterschool activity,” Alvarado said.

There have been a few successful initiatives for combating some aspects of the proposed reductions. Originally, limiting schedules to seven-period days would have affected programs at Redwood such as Leadership and Link Crew, both during zero period. However, Principal David Sondheim announced that both Leadership and Link Crew would remain as zero-period classes for at least another year, and students would still be able to take an additional seven classes.

Sophomore Isabelle Valdes is currently enrolled in Link Crew, a class geared towards connecting the school community and helping new students adapt to Redwood. According to Valdes, Link Crew is crucial to Redwood as a whole.

“Link Crew is important because of freshman orientation and we are also trying to improve the culture of Redwood. We have Friday events and are trying to better link the groups and clubs within the school,” Valdes said.

If moved into the normal seven-period schedule, many current students in Link Crew would not have been able to take the class.

“I was a little sad at the moment because I realized that I was blocked for seven classes already and that I wouldn’t be able to take [Link Crew]. However, my teachers assured us that even though the class would be during the day, there would still be ways that they would contact anyone else that wanted to be in it so we could still go to the events and help organize anything,” Valdes said.

By not implementing the policy of moving Link Crew and Leadership into the seven-period day for this upcoming year, the administration and the teachers of those classes now have more time to plan on how to make both classes more equitable to students and available to everyone.

“It would have been hard to push both [Link Crew and Leadership] into the seven-period day. They think it would be better in the long-run, but for next year it would have been pretty big of a jump… the class is nice as a zero period because you can still take the same amount of classes as before,” Valdes said. “Now you can get a lot of kids that are trying to do a lot and are taking a lot of classes, but are still interested in helping the community.”

While some classes will not be altered by the upcoming budget cuts, many students and staff will be impacted. The Fiscal Advisory Committee and Taupier will present their budget proposal to the Board of Trustees on Tuesday, Feb. 12. The Board will then vote on the final budget plan on Feb. 26.