Altering public perception of abortion through the power of rhetoric 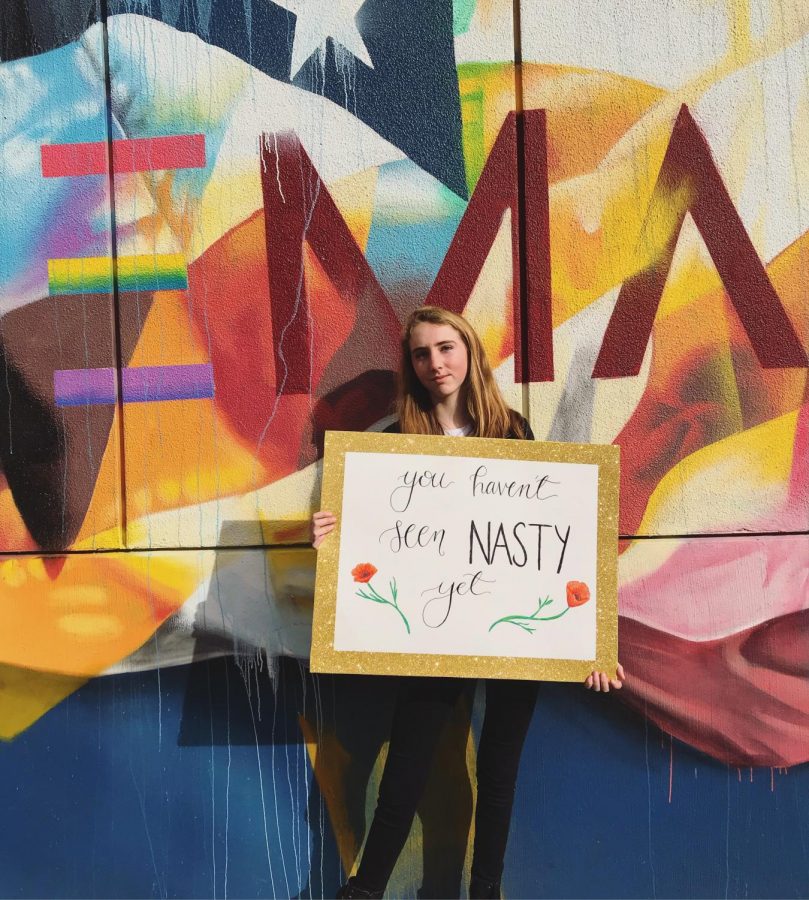 Getting ready to march, Willow Baker holds her artfully-made sign.

The abortion debate is a longstanding one, dating back to even before the famed Roe v. Wade Supreme Court case, which legalized the procedure nationwide. Initial talk of overturning abortion bans began in the 1950s, when the medical community called for more relaxed regulations, according to NPR. Women were forced to perform abortions on themselves in back alleys, and doctors couldn’t offer safer alternatives without facing legal charges.

Presently, abortion continues to be one of the most controversial topics in society. Events such as the Women’s March, held nationwide on Jan. 19, give women a platform to advocate their opinion. Many attendees sported pink pussy hats to proclaim their abortion rights, and occasional chants of “My body, my choice” pierced through the buzz of chatter for the duration of the march.

A large part of the debate, however, is about rhetoric. On Jan. 9, The New York Times published an op-ed written by Charles C. Camosy, a board member of Democrats for Life of America, the national organization for pro-life Democrats. He stated that he prefers to be called “pro-life” as opposed to “anti-abortion” because of the latter’s negative connotation.

Such rhetorical choices are also employed by several Redwood students, including junior Justin Langs. He is currently enrolled in AP English Language and Composition, a class that places a heavy emphasis on rhetorical analysis. He believes ‘pro-life’ is a better word to use, because it is more supportive of the potential child, but he is pro-choice.

“[I’m more likely to use] ‘pro-life’ because it has a positive connotation because you’re supporting a life you’re creating no matter what the situation is or the [mental health] of baby,” Langs said.

However, junior Anya Klein, who attended the Women’s March in San Francisco, believes the opposite. As a feminist and the president of the Work It club, which helps women re-enter the workforce after prison, she believes that the term “pro-life” is too aggressive and “anti-abortion” is more factual of a word to use.

“I think when you say ‘pro-life,’ you’re directly insinuating that you are killing something, and I don’t agree with that. I think if you’re at a stage where you’re getting an abortion, [the fetus] is not a person yet,” Klein said. “It’s a little more aggressive to use the word ‘pro-life’ and it negatively reflects on the pro-choice [side]. It makes it look like it’s the side that’s ‘anti-life,’ and that’s not the case.”

Although the terms that are used conversationally when addressing both sides of the abortion debate have a hand in forming people’s opinions about the subject, the rhetoric used in the media plays a part as well. According to a recent Bark survey, 52 percent of Redwood students self-reported that what they see in the media somewhat affects their perception of abortion, and 24 percent self-reported that their opinion is heavily influenced by the news.

Klein sees rhetorical bias in the media in California, and believes the pro-life side is depicted inaccurately.

“Whenever I see [pro-life] people protesting against [abortion], they are depicted in a really negative way, which, even though I’m personally pro-choice, at the end of the day, you have the freedom to say what you think … I think people get depicted as crazy or uneducated,” Klein said.

As a result of such bias in the media, the pro-life side may not always be accurately depicted. According to Klein, the pro-choice is “beefed up,” or emphasized more in the media than anti-abortion views, because of California’s liberal climate. This view is shared by sophomore Willow Baker, a feminist who attended the Women’s March as well.

“Around here, the [pro-choice side] is depicted more accurately, than say, a really conservative part in the Midwest. But again, it’s just exaggeration on either side. I think [that] pro-choice is given a lot more attention and thought,” Baker said. “Because pro-choice is so prominent around here, the few pro-life protests that we see tend to have a lot more negative connotations to them.”

Ann Jaime, who has been teaching Women’s History at Redwood sporadically since the class’s creation in 2004, believes the imbalance of language in the abortion debate to be a result of the emotional value of the topic.

“In reality, I feel like ‘pro-life’ could actually work for either side, because people getting an abortion a lot of times, it’s for their own lives, so it’s like ‘pro-women’s’ lives,” Klein said.

However, this view is contradicted by pro-life freshman Charlie Rehm’s perspective. He sees the media in California label the pro-life movement as anti-feminist, which he says is incorrect as he believes their intention is to save lives, not oppress women.

“I feel like pro-life people are described as terrible [and] against feminism, like masculinists or something,” said Rehm.

The difference between Rehm’s and Klein’s perceptions of the use of the word ‘pro-life’ lies in the art of definition. The same rhetoric, when applied differently, can result in widely varying opinions from across the spectrum.

As a result, it only takes a single word, such as “pro-life” to spark a discussion. From one small word spouts a multitude of individual opinions and thoughts, but also nationwide intellectual conflicts. Rhetoric is a powerful tool, leaving nothing and no one untouched, least of all the abortion debate.