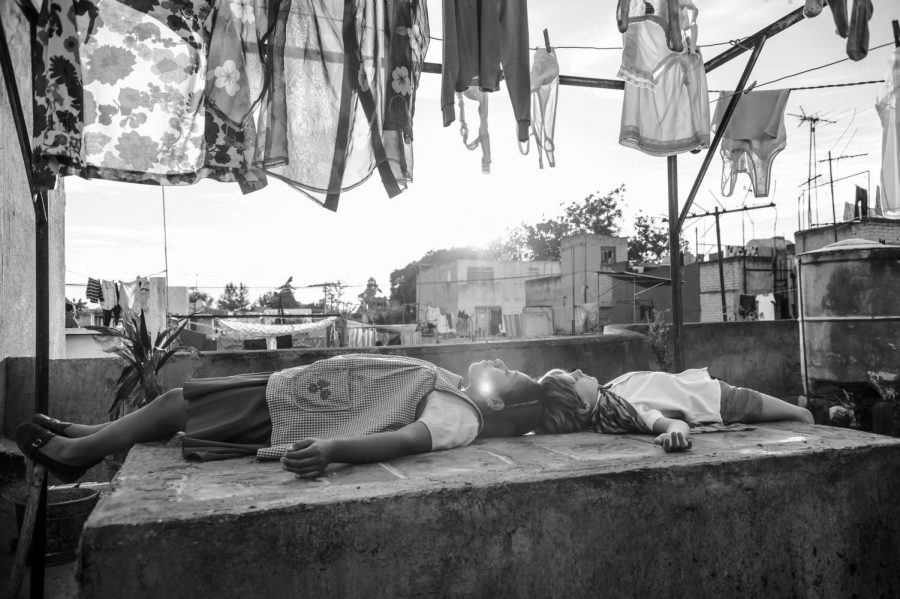 Cleo rests with one of the children she looks after as they imagine what it would be like to be dead.

It is grey and foggy in early 1970s Mexico, and Cleo is splashing soapy water on the neatly tiled foyer floor. These are the opening credits to Alfonso Cuaron’s “Roma,” complete with a logo that brings memories of old Hollywood rushing back.

Released by Netflix on Dec. 14, “Roma” has proved to be an awards season favorite. It has already won several awards, including multiple Golden Globes and Critic’s Choices, and is nominated for a remarkable 10 Oscars, matching “The Favourite” for the most nominations this year. Yet, I found it difficult to understand why. While there is no doubt that “Roma” has fantastic cinematography and style and reflects on deep social issues such as race and the treatment of lower class citizens, the storyline is incredibly boring. With a hefty run-time of two hours and 15 minutes and a poorly planned, predictable plot, “Roma” does not deserve to be nominated for such an excessive number of awards.

“Roma” follows the life of Cleo, a Latina, live-in domestic helper for a white family in Mexico City. The film is primarily focused on Cleo’s unplanned pregnancy and abandonment by the unborn child’s father, but also includes several other storylines such as the messy separation of a marriage and civil violence. While the plot features several dramatic turns, they were scattered over a lengthy run time, which felt unnecessary, and at times, overdramatic (even though the movie is classified as a drama).

Several new secondary storylines were incorporated throughout the film and often seemed like random additions. The film also included many “plot-twists,” however, these were foreseeable and overused, causing the plot to feel cluttered and unnecessarily busy. This, along with the repetition of similar dramatic scenes, such as Cleo’s boss constantly agonizing over her failed marriage, did not help to improve the already dull storyline. Some scenes seemed to be more of a desperate attempt to regain my interest rather than to present substantial, engaging material. Overall, while the larger themes behind the plot and a look into the struggles Cleo faced were interesting, the use of watered-down and repetitive scenes quickly lost my interest and, in all seriousness, made me fall asleep from boredom.

The best quality of  “Roma” is undoubtedly its cinematography. The film is presented in black and white, which, along with traditional letter type logo style, gives it an old Hollywood feeling. At first, I was concerned that black and white would not be able to showcase the artistry of the film as well as color, yet I was pleasantly surprised. Although I was watching on Netflix from my couch, this cinematographic choice made it feel like I was in a movie theater 50 years ago. I was able to better envision what it would be like to be alive at this time and I almost felt like I was experiencing the movie firsthand. This style sets “Roma” apart from what seems like the hundreds of other dense dramas that pop up before awards season, and I believe this may be the cause of its success.

Another highlight of the movie was its unique film style and moving shots. The first scene depicts Cleo walking around the vicinity of the outdoor foyer of the house where she works. Instead of using several cameras to show Cleo’s pathway or zoom in on certain aspects of the scene, “Roma” is influenced by older filmmakers in that one smooth, continuous shot is used to follow Cleo as she moves around the frame. Even when she is not moving, the camera is constantly active in order to maintain a pleasant aesthetic in each shot. Although the filming made the movie more interesting overall, the moving shots did become repetitive and had me longing for more variety. During more action-packed scenes, this style could also be somewhat nauseating as the camera moved quickly in order to keep up with the characters.

On paper, it seems like “Roma” would be a fantastic awards season competitor. The unique cinematography and exquisite shots diversify the film from most highly acclaimed dramas. Yet the lengthy and boring plot makes me question the integrity of whoever is responsible for award nominations. If it were up to me, the heavy gold statues would go to other, more entertaining movies.