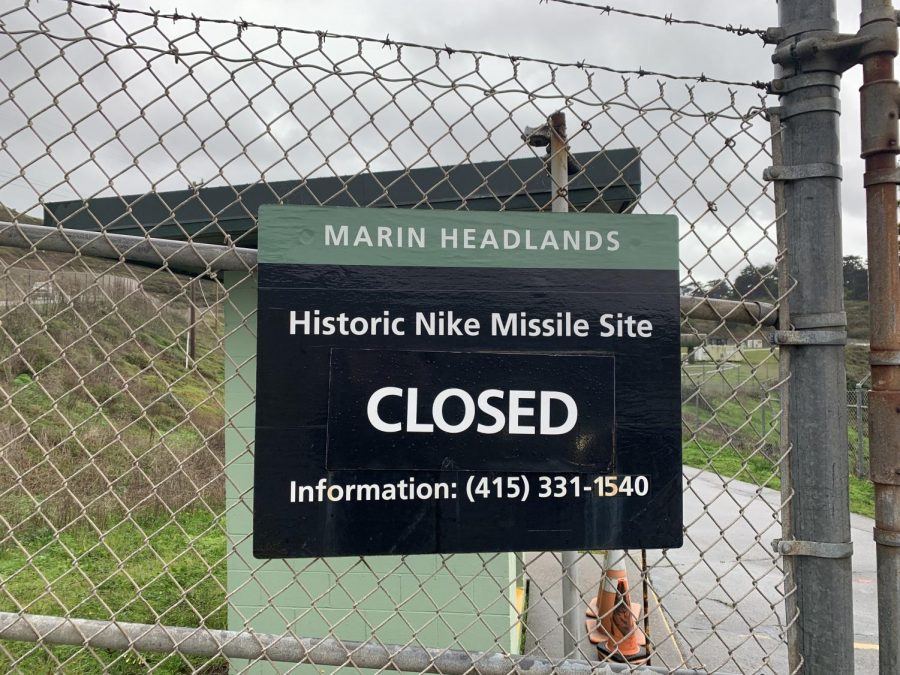 A closed sign blocking entrance to the Nike Missile Site in the Marin Headlands national park.

After a record-breaking 35 days, the government shutdown affected federal employees, the economy and, to the surprise of many, the national parks. An email sent out to the Marin County Parks Department on Jan. 4 outlined what could and couldn’t be done with the parks shut down.

“Due to the government shutdown, park staff is limited to maintain health and safety operations. Visitors are asked to Pack it In and Pack it Out… trash and bathroom services will be unavailable or closed entirely and additional facilities and areas may close at any time for the health and safety of park visitors,” the email reads.

Max Korten, Deputy Director of the Marin County Parks Department, says that since federal employees were not working during the shutdown, the national parks will most likely have lasting damage from the seemingly inconsequential effects.

“There are these short term effects like trash and restrooms, but if [the government] was closed for a long time you could have some really bad long-term effects. For example, if there was a rainstorm there could be a mudslide, and if nobody is there to respond to it, it will go untreated,” Korten said.

Korten says that his advice for helping keep the parks clean is the same as the federal government’s, “pack out what you pack in.” The popular slogan encourages people to leave nothing that they brought with them behind when they exit a park.

“Anytime you are out visiting a park or open space, just remember to be light on the land… And of course, the county and state facilities are still fully operational so I recommend people check out their local parks,” Korten said.

Some civilians did their part by respecting the parks, but local government also took action to help out. The Board of Supervisors, who oversee local tasks around Marin, have struck a 14-day agreement to lend a hand to the national government. Supervisor Dennis Rodoni is in favor of the agreement, but some of his colleagues are not.

“The county was able to in two locations, Stinson Beach and Point Reyes Station, provide our county parks people to maintain and keep the bathrooms open and managed… but some members of my board feel like we shouldn’t be bailing out the federal government so we have been picking and choosing what the most important things to do are,” Rodoni said.

Rodoni also said that along with the environmental impacts, there have been economic repercussions caused by the park closures.

“It’s a little hard to tell so far, but I am sure there have been some local economic impacts on stores and restaurants. One of the restaurant owners in Point Reyes Station told me that [MLK weekend] was kind of a key weekend for his business, but because of the shutdown not that many people were traveling out to Point Reyes and I’m not sure how well his business fared,” Rodini said.

For the people traveling out to the parks during a government shutdown or not, the supervisor also offered his own advice on what people should be cautious of.

“[People] shouldn’t take any risks because there are lots of dangers like cliffs and things in all the parks and should someone fall off or be in a spot where they can’t get out it will really stretch the resources even more than are working. People should just pay attention, be smart and not do anything that they wouldn’t do when the park was open,” Rodoni said.

Despite the park shutdowns, junior Skylar Carey visited Joshua Tree, the Grand Canyon and Redrock with his family over winter break. Carey said having no park rangers patrolling the area impacted his overall experience.

“There was no waste management at any of the parks so there were trash cans overflowing everywhere and there was no toilet paper in the bathrooms… all of the visitor centers were closed so we couldn’t look at maps or buy any materials we might have needed… the parks were also free to get into, and people were camping anywhere they wanted which was nice but it probably raises some environmental concerns,” Carey said.

Carey also said that at times he felt like his safety was not as secure as it would be with a fully-staffed park.

“I realized when I was far into one of the parks that help was now much farther away than it usually is, and that scared me a bit… One time we realized someone had gotten hurt and needed a helicopter evacuation to get to a hospital. If there had been park rangers there, the person might have been able to get help on site,” Carey said.

Now that the national parks have been reopened, federal staff will return and try to reverse the damage done over the 35-day shutdown.