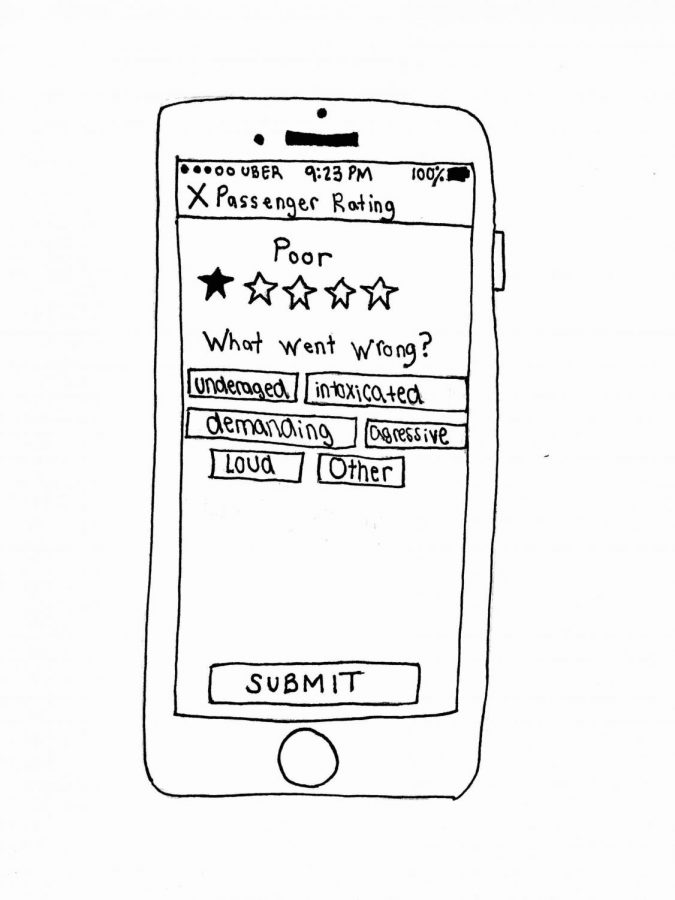 Whether you are in need of a ride to school, a designated driver to bring you home or a drop-off at the airport, you have most likely used Uber. According to a March 2018 study from Business of Apps, in the United States alone, 41.8 million people are users of Uber car service, and over 84 percent of users of Uber and Lyft car services are teenagers. Like taxis, Uber car service has become a popular and convenient way for people to get where they need to go throughout their day. Since the rise of this new form of travel, questions have been raised by customers of Uber about the safety and integrity of the business and its drivers. How qualified are Uber drivers? Do drivers really care about the safety of their passengers? Although Uber drivers have been reported of sexual assault and reckless driving in the past, the passengers of the Uber cars are the ones causing the business to become dangerous.

One danger associated with Uber driving is the fact that underage children and teenagers are often traveling alone, or with other underage friends as passengers. According to uber.com, anyone under 18 years old must be accompanied by someone 18 years or older whenever using the car service. Uber drivers are directed to request the rider to provide them an ID if the driver believes the passenger may be underage. Although many drivers do not check the age of their passengers, it is the responsibility of the passengers to be truthful about their age to begin with. According to a recent self-reported Bark survey, 78 percent of students said they have ridden in an Uber while underage, without someone 18 years or older present with them. This significant number of underage riders are not only putting themselves in danger, but are creating dangerous situation for drivers.

Uber passengers need to rethink whether or not their decision to catch a ride from an Uber is worth the risk of their safety, and their driver’s safety. One example of how teenagers have caused unsafe situations in Ubers was the Las Vegas attack of an innocent driver. An Uber driver from Las Vegas received a request from a passenger through UberPool, Uber’s shared-ride feature. When the driver arrived to pick up the passenger, two underage teenage boys entered the car. As Uber drivers are instructed to do, the driver asked the boys to leave the car due to the fact that they were both under 18, and in response, the boys joined forces and beat up the driver which left him with a broken cheek bone.

These boys intended to take advantage of the Uber driver, when he was only trying to do his job and and abide by Uber’s rules. Uber drivers are only trying to make a living and keep their passengers as safe as they can, so it’s essential for underage riders to follow Uber’s rules. In addition to this incident, a pregnant Lyft driver was recently stabbed to death by her male passenger in Arizona. Although the murder took place in a Lyft vehicle rather than Uber, this tragedy proves just how much passengers can put their drivers in danger.

In general, Uber passengers are given too much freedom in regard to how they treat their drivers. According to complaints by various Uber drivers, passengers have been using the Uber rating system to falsely accuse drivers of acting inappropriately during their ride. These complaints are not only endangering the jobs of drivers, but the prosperity of the Uber business and its main purpose. Many people forget that Uber drivers can also rate their passengers. As a result of misbehaving in an Uber car, Uber drivers may no longer pick you up from your desired location upon seeing the rider’s star rating.

Although passengers play a major role in the safety of Uber driving, the drivers must also ensure that their passengers have a safe ride. In many cases, Uber drivers have caused uncomfortable situations for their riders, and have not prioritized their safety. In a recent Bark, 62 percent of students self-reported feeling some level of discomfort while riding in an Uber. Uber requires all of their drivers to go through background checks, to ensure that they are qualified for the job. However there still are loopholes in the system as an Uber driver in Michigan was found to be a criminal after his background was not extensively checked. The man went on a shooting rampage, and picked up passengers before and after committing the crime.

Although more extensive background checks still need to be done on drivers, I believe the passengers play an even larger role in the dangers of Uber’s services. Even though many Uber drivers do not check the ages of their passengers, underage riders should know not to ride in an Uber without someone 18 years or older present. Just because Uber drivers have caused some terrible situations for passengers does not mean that passengers have the right to treat all drivers with disrespect.

Instead of taking advantage of Uber’s underage driving regulations, it is best for passengers to be honest about their age instead of taking a risk. Next time you need an Uber, reconsider whether or not a ride is worth violating the rules, and most importantly, the risk of threatening the safety of yourself and your driver.