Trespassers it is time say goodbye to Lava House 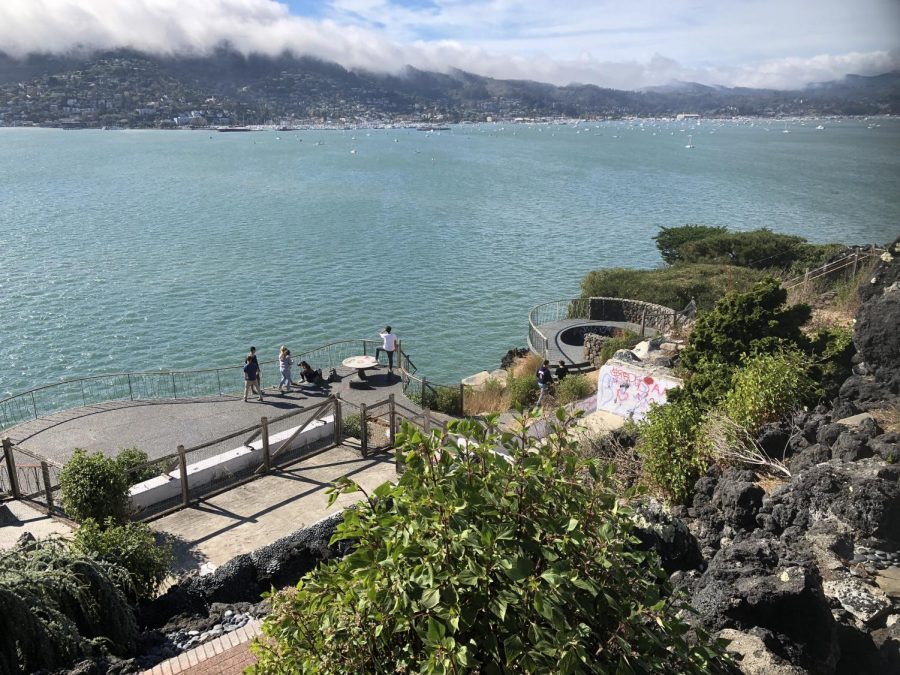 A quiet place to read. An ‘original’ setting for a photo shoot. A secluded destination for morning sunrise yoga. A romantic location to take your special someone. Whatever Lava House is to you, it’s time to say goodbye as the property will soon be demolished.

Lava House in Tiburon is owned by Jerry Ganz, a wealthy entrepreneur who marketed the seatbelt and has faced many legal issues over the years with the city council. Ganz originally envisioned building a mansion on the property, but two years after he received approval on the project, construction came to a halt without explanation. From that day on, Lava House has remained an empty, unfinished mansion that sits upon imported lava rock from Hawaii. The fate of Lava House, however, is about to change: Jamba Construction will begin tearing down the remains of the property on a date that is yet to be announced.
Although entering the grounds is illegal, many students in Marin have ventured to Lava House. Junior Katelyn Koch has enjoyed the views of San Francisco Bay from the Lava House property on multiple occasions.
“I have gone with my friends and watched the sunset while taking cool pictures. It is this place that has the weird, creepy story, like a haunted house but cooler, so I am bummed about it being torn down,” Koch said.
Some Redwood students consider Lava House to be one of the many wonders of Marin, along with well-known destinations such as the Marin Headlands, Bolinas-Fairfax Ridge and the Hippy Tree. Growing up in Tiburon, Junior Max Ross has visited Lava House many times.
“[The closure] is awful because it is kind of a landmark for teenagers. It is another good lookout spot and another view being destroyed,” Ross said.
About a year ago, Ganz contacted Mark Swanson, a Redwood parent and the President of Jamba Construction, to begin the project of clearing the whole property. The company typically deals with residence projects that are considerably complex and unique and Lava House is no exception.
“I got approval to bring a barge in and then a landing craft down where those rocks are at the beach,” Swanson said. “We are going to take all the material and all of the lava rock and all of the features and the concrete and bring it over to one of the houses [plots], and then we are going to transport it down a swale, like a natural depression. We are going to bring in barges and take it away.”
Jamba Construction had to get approval from the Bay Conservation and Development Commission (BSDC) before they could begin the removal project. Despite difficulties, Jamba Construction was able to get approval in five months. The city of Belvedere granted Ganz one year to complete the project, but Swanson is aiming to finish it in eight months. He explained that this project will not take a long time because there are no building plans for the property.
“At least we are going backwards; we aren’t going forwards and trying to build something. [The trustees] have asked us to do some landscaping work so I am really just trying to beat the next rainy season,” Swanson said.
Despite protest from the teenagers who are fond of Lava House, Swanson said he has received significant support for the project from the local community. Meanwhile many others are unaware of the plans for the estate because the project has remained fairly under the radar.
“One of the reasons we are trying to keep it quiet is because it is a private thing for Jerry. I try to respect it. I do try to manage and respect people’s privacy,” Swanson said.
From the perspective of the construction team, the property is a safety threat. Many parts of the property including steps and railings are falling apart. According to Ganz, the last thing he needs is more legal trouble.
“A couple of kids get stoned and they are running around at night and one falls off and smacks his head. It would be a total drag. This place is a total hazard,” Swanson said.
Trespassers may notice the large amount of beer bottles scattered throughout the property. Swanson said that whenever he is on site he usually sees people on the property, often doing graffiti art on walls. He added that Ganz is aware of the fact that many people enjoy exploring the property, but he agrees that the safety of the community is more of a priority.
While this is a big project, Ganz, Swanson and the trustees are working well together and so far, everything is moving smoothly.
“[Ganz] has been very supportive through the entire process and he has been great to work with,” Swanson said.
Interested visitors should schedule their final trip to Lava House soon. Swanson predicts that construction will begin in roughly two weeks. The sun is about to set on this abandoned lava rock wonderland.