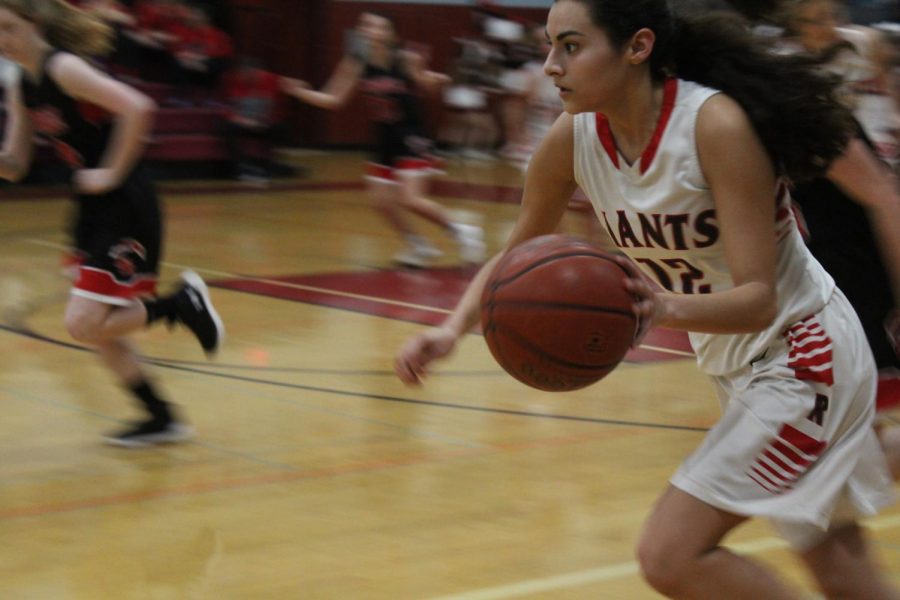 The tone was set from the start of the game, with Redwood winning the tip off and scoring two baskets within the first 30 seconds. Senior Gabby Beltran attributed this quick pace to the natural abilities of the team.

“We’re really fast, I think this is probably one of the fastest teams we’ve had ever. We are able to press the ball so we go quick, and we overwhelm them with our height and our speed so we really just dominate,” Beltran said.

Still, San Rafael was able to control the ball and keep it on Redwood’s side of the court for about half of the game, giving the opposing team the opportunity to score. However, Redwood managed to prevent this by focusing on their fundamentals, leaving San Rafael to call two timeouts before the first quarter ended.

“This time around, I think we pushed the ball incredibly, we sprinted the floor, we got really great transition layups and we really locked down on defense,” Beltran said.

The aggressive defense, as well as one offensive call, contributed to the nine total fouls by Redwood. However, the fouls were spread across both halves, with five fouls in the first half and four fouls in the second, so the players did not receive any excess penalties. The strong defense allowed Redwood to keep a lead, and by halftime the score was 37-5.

Senior Kamalei Kaleikini, who scored eight points throughout the course of the game, credits these high numbers to the months of intense practice and believes that the team excelled in all parts of the sport.

“I think [we put] it all together during this game—our offense, our defense, our bench—putting that all together this game really shows how all our hard work has paid off and it’s coming to the end of the season so I think we all just want to leave it on the court,” Kaleikini said.

Even as the game came to a close, the night was still far from over. Both teams finished the game with a celebration for senior night, an appreciation of the seniors on the team who will not be playing for Redwood in the coming years. Senior Jenny Walker, the top-scorer of the game with 15 points, had mixed emotions about the evening.

“It’s really sad, I’ve been to four senior nights and this one’s mine and it’s really crazy to think that this could be my last home game. I think that I’m just enjoying it rather than taking it more seriously and just kind of having fun,” Walker said.

The seniors haven’t seen their last night on the court. The Giants have one more regular season game against Marin Catholic this Monday, Feb. 4 at Marin Catholic, before moving into playoffs.