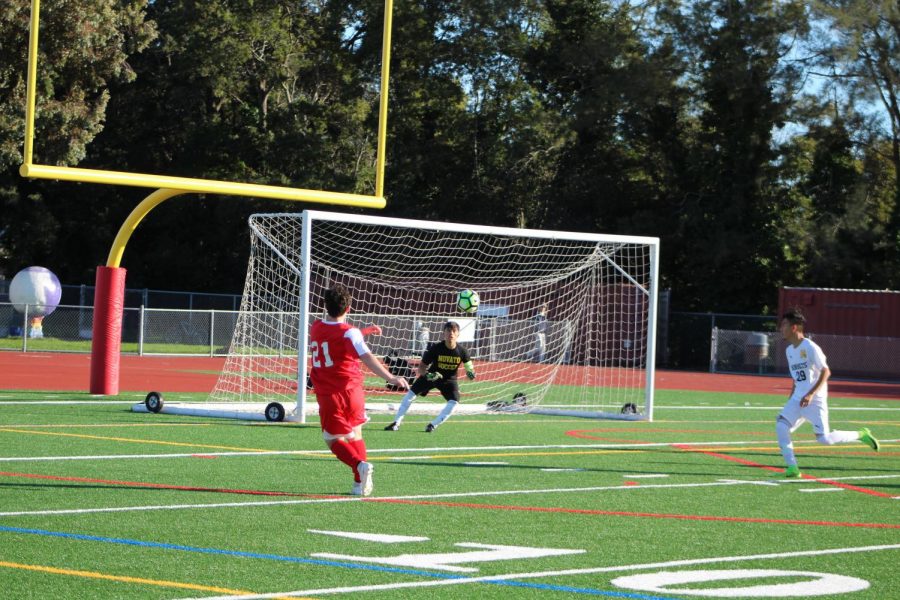 In a seemingly never-ending battle to make up for a small error early on in the game, the varsity boys’ soccer team lost to Novato 1-0 on Tuesday, Jan. 22.

Junior Stanley Gaither, a left wing on the team, reflected back on the cause of their loss.

“That one goal they scored in the first half wasn’t expected to cost us the game,” said Gaither. “It was just a small miscommunication that happened to give them a leg up on us for the rest of the game.”

Having tied their previous game 0-0 against Drake, who beat Novato 4-0 in their next match, the Redwood boys were expecting to add another win to their 9-1-3 league record, according to senior midfielder Cole Hardister. Though the boys did not quite meet their expectations for the game’s outcome, they did demonstrate their ability to compete at a high level, dominating with 80 percent of offensive possession in the first half and creating multiple opportunities to score, though none were successful, according to Head Coach David Siracusa.

The first half of the game was largely dictated by Redwood’s high intensity and aggressive attacks at the goal. Although more often than not these attempts resulted in a turnover, Redwood always found a way to regain possession. This was no surprise to Siracusa, considering their record.

“We’ve struggled all year in the scoring of goals … It’s not about the amount of chances we get, it’s more about finishing,” Siracusa said.

With 10 corner kicks and 13 throw-ins, the team found themselves with the ball in front of the goal multiple times, but were unable to score. With seconds remaining in the first half, a free kick collision resulted in center mid Alex Johnson injuring his knee. Soon after, Novato scored their only goal because of a late pass to Redwoods goalie Harri Hettrick, which disrupted the home team’s momentum.

As the second half began, an increase in foul calls and bickering were visible on the field, the recent goal resulting in elevated tension. This proved to be beneficial for the Giants, as Redwood began to increase their time of offensive possession. Although they continued to try and score, in each failed attempt it was clear that these strong drives to the goal were not having any effect on Novato’s defense.

“We had a ton of chances in the end and none of our shots were falling; we’ve been having trouble all year getting the ball in the back of the net, and I just hope we can figure it out soon to stay number one in MCALs,” Gaither said.

Late in the second half, and shortly after a series of missed corner kicks with a very close header by centerback Justin Neustaetter, Redwood lost their offensive momentum. By this point in the game, both Redwood and Novato players appeared to be physically and mentally drained. A chain of turnover after turnover had run the clock down to the last three minutes.

“The last few minutes were so frantic because we were just trying to get a shot off to save the game. Our minds were set on offense, but with the pressure they were applying we couldn’t get composed,” Neustaetter said.

With high hopes for the rest of the season, Redwood is aiming to focus in on the challenge of taking advantage of scoring opportunities to maintain their high rank in MCALS.

“There are only four teams in the MCAL playoffs this year, when usually there are 6 so we’ve got a good chance of coming out on top as long as we get ourselves back on track and start finishing shots,” Gaither said.