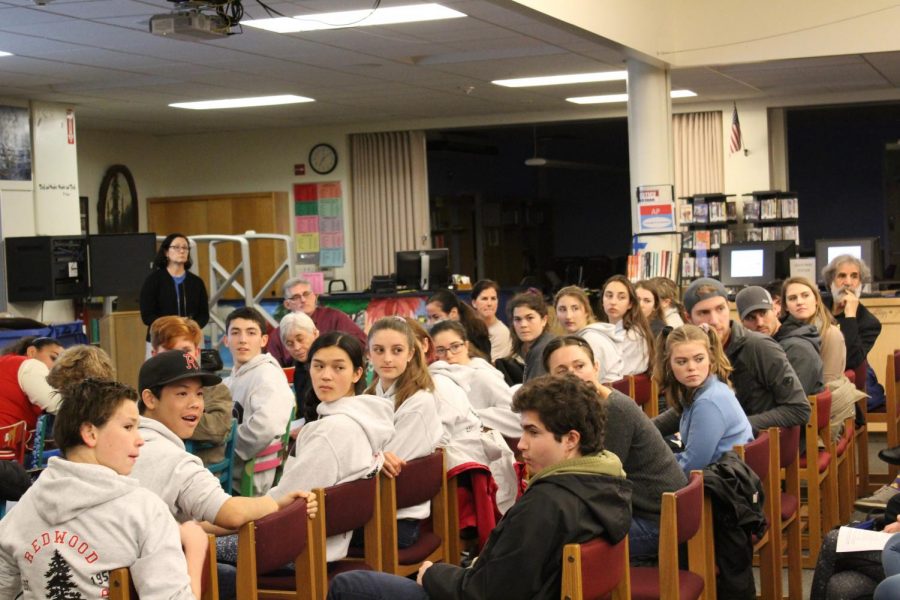 The initial draft of the budget cuts, formed by the Fiscal Advisory Committee, would save the district a projected $2.9 million. The draft includes several reductions such as decreased spending on technology, certified staffing, maintenance, athletics and therapists. The proposal also listed several eliminations to the budget, namely cutting certified librarians, evening classes for the community, athletic trainers and limiting schedule sizes to seven-period days.

On Tuesday, Jan. 15, Superintendent Dr. Tara Taupier gave the Board of Trustees an update of the current state of the budget, as well as projections for the future during the bi-monthly TUHSD board meeting. The following evening, Taupier, along with Corbett Elsen, the Chief Financial Officer of the district, hosted a community forum to address comments and concerns regarding the proposed budget cuts.

Despite Measure J passing in November, which is expected to generate roughly $5 million in revenue annually, and $1.8 million saved in budget cuts last school year, the district still has an operating deficit, spending while in debt, of $3.7 million this current school year. One of the primary concerns expressed by the board members is that if no actions are taken to reduce district spending, then the budget reserve, or “safety-net”, will continue to diminish.

“Even with the parcel tax revenue, even with the cuts made this fall and even with the proposed $3 million savings, we are still deficit spending next year at over $1 million with enrollment growth. At least we have more time by being at a better place [than before],” Elsen said.

While the budget reserve was originally projected to be insolvent, or run out of funds, midway through the 2020-2021 school year, Measure J has now prevented this possibility. However, the district still has a budget reserve of only 11.5 percent of the total budget. While this is significantly higher than the reserves of schools receiving funding through Average Daily Attendance, or state funding based on student attendance, it is still less than the 17 percent average of reserves for high schools receiving basic aid, or funding through property taxes, including the TUHSD.

“We’ve had enrollment growth over the last 10 years of over 1,200 kids, and as a community funded through basic aid, we don’t get additional state funds with each student that grows,” Taupier said. “Essentially, while our revenues have grown, it hasn’t compared with enrollment [as] our per-pupil dollars have decreased.”

The rise in enrollment has caused the district to continue operating out of debt, leading to immediate mandatory action and increased spending reductions. However, the newly proposed budget cuts have received backlash from the community, including concerns regarding the quality of education across the district. On Tuesday, Melissa Bowman, a Tamalpais (Tam) High School librarian, spoke to the Board on how the proposed cuts would not only affect her but the possible effects they would have on the students.

“Part of what makes a great school is a great ratio, student to teacher, so I hope we can figure out how to resolve that because of the quality that we need to continue to offer our clientele,” Bowman said.

Several audience members also voiced their opinions at the community forum in the Redwood library. There were approximately 60 members in the audience, including parents, staff members, Redwood Foundation members and several students, including junior Lyla Perrelli.

“[The budget reductions] felt so sudden. I felt very ill-informed about all these new major things happening literally next year, so I felt like I needed to go see and understand to get more clarification on why these reductions are happening,” Perrelli said.

The majority of the speakers supported preventing the Bay Area Community Resources therapeutic counselors, UCSF athletic trainers and schedules over seven periods from being cut or limited from the budget.

“If [the district] knows we are literally [one of] the top [wealthiest counties in the country], and that our parents will pay for this education and this reputation, then they need to consider all aspects of Redwood that make ‘Redwood’, including Leadership” Perrelli said.

By limiting students to only seven periods each day, this proposed cut will change the structure of how zero-periods are integrated into the school day, including classes such as Leadership and Link Crew.

The budget cuts would affect every school in the district, and according to the Board Representative for Tam, junior Kara Kneafsey, many Tam students are nervous about the proposed budget reductions. Kneafsey, who is taking eight classes, would be affected by the seven-period schedule maximum, but is prepared if the change takes place.

“I’m currently taking Economics outside of school so I can make room for Leadership in my schedule next year. It’s not ideal, but it’s an important class for me so I would take those lengths to stay in the class, which others wouldn’t be able to do,” Kneafsey said.

Some audience members also suggested alternative solutions for the budget reductions other than the current proposed cuts. This included changes to the physical education program, which Taupier said the Fiscal Advisory Committee is considering for the future.

While concerns arose regarding the TUHSD’s financial outlook this year, the district believes that Governor Gavin Newsom’s plans for public school funding could relieve current deficit spending. Possible plans include decreasing teachers’ and administrators’ pensions, another large component of the district budget. If Newsom’s current proposal passes, then the TUHSD would receive an additional $783,000 of funding over two years.

Although Newsom’s plan would reduce deficit spending, the additional funding is not nearly enough to support the district in the long-term, according to Elsen. Instead, the district will evaluate how to approach long-term solutions once they understand the impact of their immediate decisions.

“We’re still deficit spending… We’ll cross that bridge when we get to see what [the] impact [of the final budget plan] is on services to students and staff in the next year, and see where things have evolved, where revenues land, where the governor’s budget land, where compensation for our employees land and so on,” Elsen said. “By making the tough decisions now, that buys us more time in the future to [make changes] thoughtfully as opposed to suddenly.”

On Wednesday, Jan. 23, the district will host another community meeting for feedback at Drake High School. The Fiscal Advisory Committee will then recommend their budget proposal to the Board of Trustees on Feb. 12.

“I’m sure there will be some change [to the current proposal]; that’s the idea of getting feedback,” Taupier said.

The district is still working on alternative solutions, but the Board will vote on the final proposal on Feb. 26.