One Acts, monologues and more at the first ever student-run One Act Festival 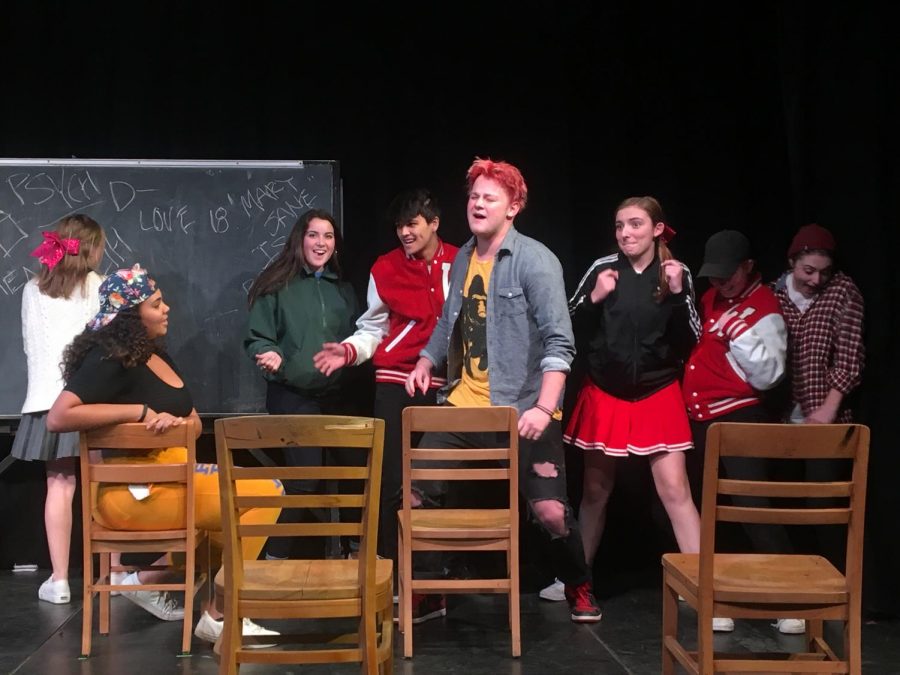 A musical portion of the Advanced Drama One Act on high school and drug use.

The drama program’s first ever One Act Festival occurred from Dec. 7 through Dec. 8. It included a compilation of One Acts from Beginning and Intermediate Drama as well as monologues from the upperclassmen in Advanced Drama. The shows alternated between the Little Theatre and room 306 every hour and each show was composed of around two one acts and two monologues.

The One Acts are short plays, around 10 minutes long, with only a scene or two in each. Senior and four year drama student Theo Wood feels that they are a great first step for the freshman into the world of drama.

“I get to see freshman that come in and pick [it] up and start really loving acting,” Wood said. “For me as a director, I loved seeing the freshman blossom throughout the year and even through one One Act, just them growing because that was something that happened to me and I really like giving that back to the freshman, that ability to immerse yourself in drama and explore.”

The festival was all student-run, from theatre production, to video footage and lights and sound. The Advanced Drama students and a group of student interns worked together to put on the festival.

“The production of the One Acts is always student-run but this year is our first time doing the One Act Festival, so this was really new and at times hectic,” Wood said. “It was mainly put on by the students so it was a major student effort…and this just took it to the next level.”

Senior and Advanced Drama student Amira Jain was one of the directors of the One Act, “10 Ways to Survive the Zombie Apocalypse.” She felt that directing was a very rewarding experience.

“I find the process really cool because it puts you under pressure and brings out what kind of actor you are under pressure which I think is really special to know. We get to do two rounds [of One Acts] a year and experience a lot of intense theatre work,” Jain said. “It’s really nice when people come watch, it just makes me feel validated.”

Senior Paris Dong was also a director in “10 Ways to Survive the Zombie Apocalypse,” and noticed that getting their actors to care about their work was an essential component to the progression of the One Act.

“You can really see the progression of the students because when they just started, they were reading off their lines very monotone, but over time you can really see that they’ve gained emotion and are starting to care about the play so you can see that commitment,” Dong said.

Wood feels as though one of of the biggest highlights of the One Acts is the newfound freedom that the freshmen get to explore in drama.

“[The One Acts] are an interesting project because…you don’t really get to see a character develop over a story arc, a lot of it is coming up with it yourself…. Another cool thing is giving [the freshmen] artistic freedom which I think for them is new coming into high school,” Wood said. “In middle school there isn’t a ton of artistic freedom and that’s new in high school and freshman drama.”

Along with many opportunities, there were some obstacles presented as well. One of the biggest challenges for Jain was getting the cast to open up and feel more comfortable acting.

“Once you’re comfortable, it’s a lot easier for you to work with [freshmen] and get them to work with you. We have a couple freshman who were really shy in the beginning and didn’t talk much but we started getting them to open up and now they’re more comfortable around us and I think that’s really cool,” Jain said.